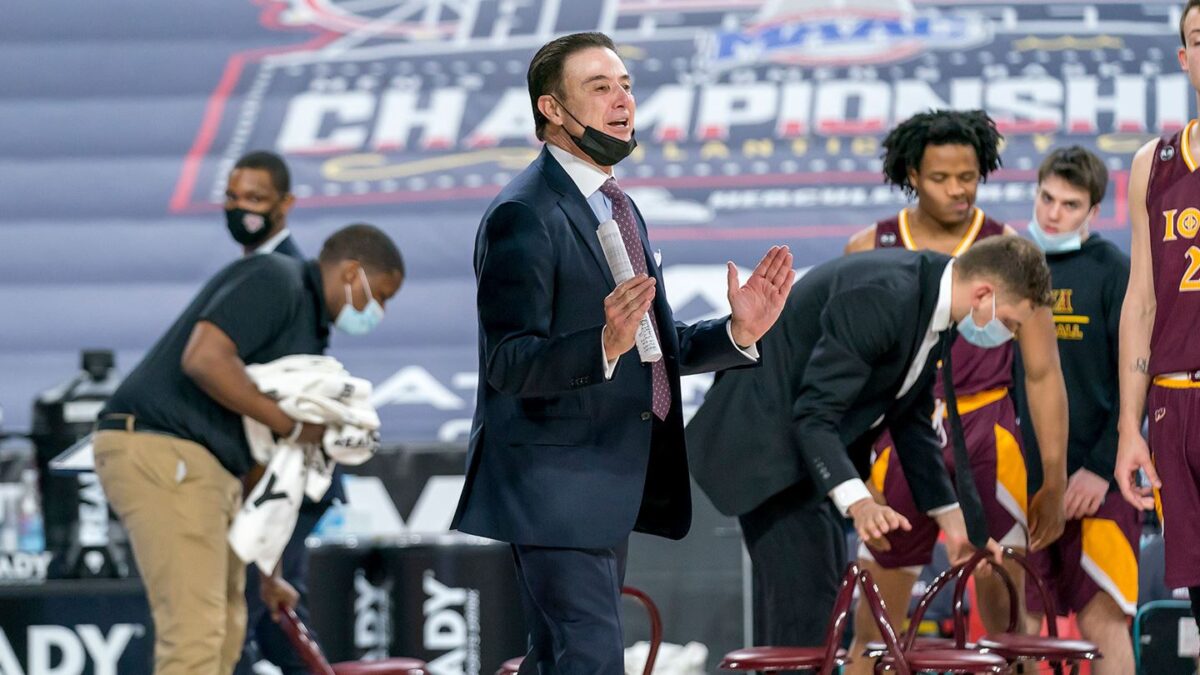 By ADAM ZAGORIA Rick Pitino’s contract extension at Iona didn’t work out but the coaching legend is looking forward to having a big year at the MAAC school. In February, sources told ZAGSBLOG Pitino was in negotiations for a lifetime contract at the small Catholic school in New Rochelle, N.Y. Those talks didn’t work out and instead Pitino has three years left on his current contract that pays him in the high-six-figure range and has no buyout. He recently hired Evan Daniels of CAA as his agent. “Well, I guess they didn’t want me to go into 85 years of age,” Pitino said with a smile during a Zoom call Thursday, “We didn’t necessarily talk about a lifetime contract, we talked about a new contract and it didn’t work out for a variety of reasons. I’m not upset and nobody’s upset about it, it just didn’t work out. There was a changing of the guard with the Board of Trustees and a few other things that didn’t work out with the contract so it’s no hard feelings and we just try to have a great team this year.” Pitino, 70, is a member of the Naismith Hall of Fame. He left the door open he might coach somewhere else after Iona. In recent years he has been linked to openings at Maryland, Indiana, UNLV and St. John’s. “I want to coach for a long time, as long as my health stays the same,” he said. “I said I would love to finish my career at Iona but sometimes it just doesn’t work out. You just never know about the future. My intent is I love where I’m living, I love the school, I love my players even more than where I’m living and how much I love the school. You just never know. “I really enjoyed the Euroleague, I had a great time there. Every place I’ve worked, I didn’t like the ending of Louisville, but every place I’ve worked was just fantastic and I’m enjoying right now. The players that I’m coaching right now are a terrific group and that’s what makes it so much fun.” In two years at Iona, Pitino has gone 37-14 and 23-6 in the MAAC with one NCAA Tournament appearance and one NIT bid. Last year, he won his 800th career game. His team was picked to win the MAAC again this year and features junior forward Nelly Junior Joseph, a preseason All-MAAC First-Team selection, and Second-Team selection Walter Clayton Jr., a sophomore guard. He said he and the fans “will find out very early” how good his team is because they have one of the toughest non-conference slates in the nation, with games against Ivy League favorite Penn, at Hofstra, at New Mexico (where his son Richard Pitino coaches) and against Vermont, St. Bonaventure, Saint Louis, Princeton and SMU.

Pitino ranks 11th among Division 1 coaches in wins with 807 — three behind Kentucky’s John Calipari — but would be third behind Duke’s Mike Krzyzewski and Syracuse’s Jim Boeheim were the 123 victories that he was forced by the NCAA to vacate from his time at Louisville intact. He won NCAA championships at Kentucky (1996) and Louisville (2013) before the latter was vacated, and he’s one of only three coaches to lead five programs to the NCAA Tournament, including Iona. Pitino came to Iona with the baggage of multiple scandals occurring on his watch at Louisville, where he was ousted in 2017 amid an F.B.I. investigation in which two assistant coaches under Pitino were accused of funneling money from the school’s apparel sponsor, Adidas, to high school recruits. Pitino has long said that he did not know about the scheme, or another involving a staffer soliciting prostitutes and strippers for players and recruits. After Pitino was fired, he spent two seasons coaching professionally in Greece, then was hired at Iona in 2020. In his first season at Iona, he led the Gaels to the MAAC Tournament championship and the conference’s automatic bid to the NCAA Tournament despite several COVID-19 pauses, including one that lasted 51 days. He also tested positive for the virus during the season. Last year, the Gaels won the MAAC regular-season title and were upset by Rider in the conference tournament. Saint Peter’s, led by coach Shaheen Holloway, won the MAAC Tournament and made a Cinderella run to the Elite Eight of the NCAA Tournament, beating Kentucky, Murray State and Purdue along the way. Pitino said he believes another MAAC team will make a similar run in the future. “It’ll happen again, just like it happened with Loyola,” he said. “It’s not going to happen every year, certainly. Saint Peter’s was one game away from the Final Four.” *** Pitino also shared some thoughts on a few other programs, including Seton Hall, St. John’s and New Mexico.

"I think St. John’s Is going to be the most improved team in the country. In judging from the pro scouts that have been at my practice, their backcourt, their additions to their front court, they’re very bullish on St. John’s"

"Seton Hall has always played a very difficult non-conference under Kevin Willard. I don’t know what it’s like this year. It would’ve been difficult if they would’ve kept us on it."

"I should've never taken that game and agreeing to a home-and-home with my son. I should've really smelled a rat and realized that he had a great team, one of the best backcourts in the nation"

Villanova star Justin Moore unsure when, or if, he will return this season from Achilles' injury