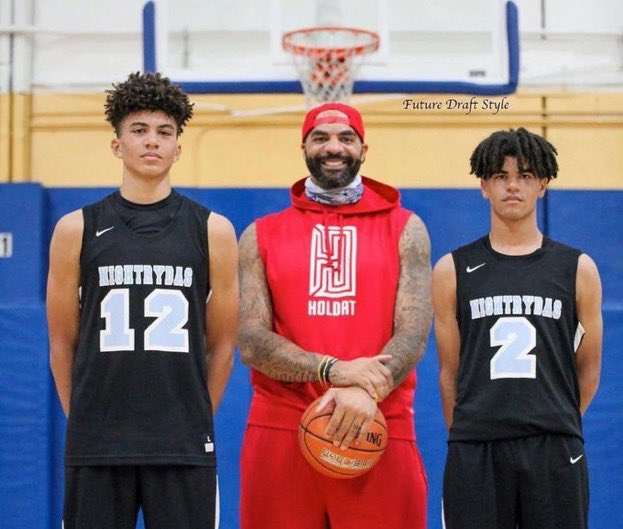 By MATT WHITFIELD COLORADO SPRINGS, Colo. — Two of the more intriguing prospects in the Class of 2025 are here this weekend at the Team USA Junior National Team Mini-Camp. Twins Cameron and Cayden Boozer, sons of former Duke forward and two-time NBA All-Star Carlos Boozer, are among the 58 players here competing in front of media members and NBA scouts. The twins from Miami (FL) Christopher Columbus High are rated among the top 25 prospects in the Class of 2025 by most major services, with Cameron, a 6-foot-9 power forward, being the top ranked player across the board.

While both hold offers from Duke, the brothers say they’re far from locks to follow their dad’s path to college. “[Duke] is a great school,” Cameron said. “They have a long history of winning. They’re just a winning program in general. Obviously, I’m going to take a look but everyone talks about me being a lock, but I’m not a Duke lock. I’m going to look at all the schools and see what the best school is for me.” Cayden, a 6-3 shooting guard, added: “[Duke, they’re] not a lock. Maybe they’re not the right fit for me. I just want to learn more about every other school. I have options. I’m going to look at every school that offered me and see how I fit to their program, so no Duke’s not a lock.” Cameron mentioned that Duke, Memphis Michigan, Miami, Florida State, FIU, and Arkansas State have shown early interest, and that he has been on an unofficial to FSU this past summer. Cayden said Duke, FIU, Miami, FSU, Michigan, Arkansas State and Missouri are all involved early on. With some of the same schools recruiting the brothers there is even a possibility of them taking the same college route. “We talked about it,” Cameron said. “We got to look for the best schools for both of us, so if the school is the best fit for both of us, we’d go together, but if not, we’ll take different paths.” For now, the brothers are just enjoying being at the Team USA Mini-Camp taking part in drills in front of numerous scouts and NBA personnel, including OKC Thunder GM Sam Presti. “It’s great seeing the top players from 2026, 2025, 2024, and 2023. They’ve got all four classes here it’s just great completion and great players,” said Cameron Boozer. Added Cayden: “It’s been a great experience. This is my second time coming around so I definitely have the confidence. Last time I wasn’t too confident but this I’m confident playing with all these national players. We usually don’t play them because they’re from different states of course. But it’s definitely a good experience to play all these top recruits.” Follow Matt on Twitter Follow Adam Zagoria on Twitter Follow ZAGSBLOGHoops on Instagram And Like ZAGS on Facebook

Class of 2024 point guard Tahaad Pettiford raves about Auburn visit, working on others