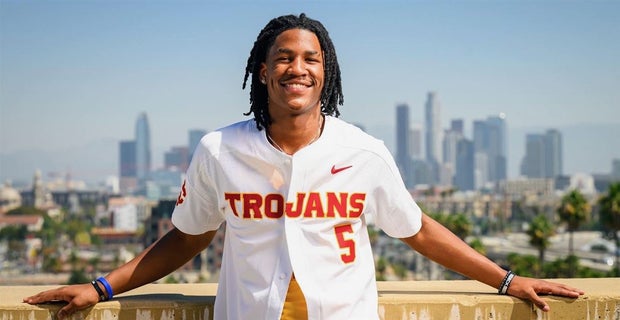 By ADAM ZAGORIA Class of 2023 four-star combo guard Silas Demary Jr. has committed to USC.  Demary, the 6-foot-4, 180-pound guard from Combine Academy (NC) and the Team Curry AAU program, also considered St. John’s, VCU, Georgia and N.C. State, among others. He is ranked the No. 14 combo guard nationally by 247Sports.com “USC just felt like home,” Demary told USCfootball.com. “That’s home away from home, but I just felt like it was a stick.” “Going out there seeing the campus and the environment, it felt right. Then just the fact that knowing I can come in this upcoming year as a freshman being able to earn and fight for minutes and just be impactful really. And on top of that, they’ve put guys in the NBA.” He is the first commit in 2023 for coach Andy Enfield and his staff. When asked to describe his game by ZAGSBLOG, Demary compared himself to the likes of Boston Celtics guard Marcus Smart. Demary said he gets things done on both sides of the ball.  “I feel like I bring every aspect of the game to a team,” Demary said. “I can do anything a team needs. Scoring, assists, defense, rebounding, just bring all the hustle things, all the little things for my team.” Follow Adam Zagoria on Twitter Follow ZAGSBLOGHoops on Instagram And Like ZAGS on Facebook