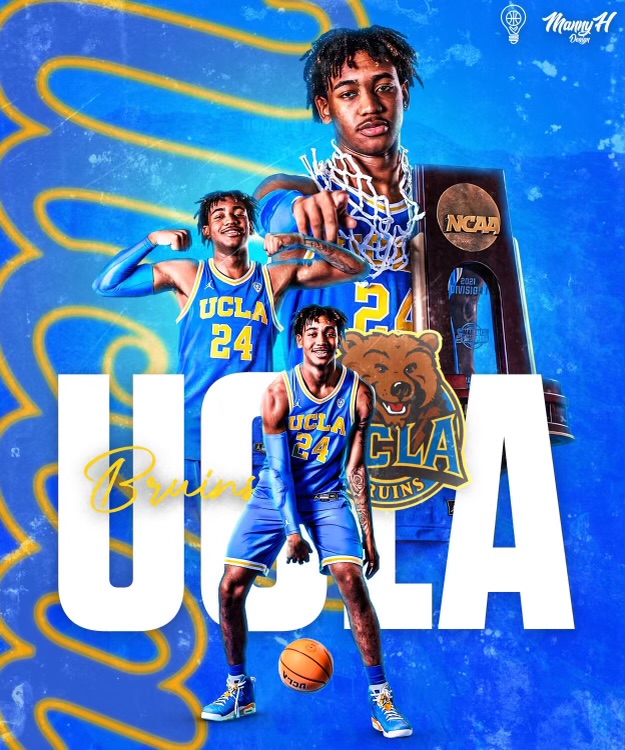 By ADAM ZAGORIA Brandon Williams, the 6-foot-8, 195-pound power forward from Christ the King High School in Middle Village, Queens, narrowed it down to a West Coast option and an East Coast option. UCLA vs. St. John’s. In the end, he decided to spurn the local school in the Big East and head West to the traditional power in the Pac-12. “UCLA, they’re just a big program, they have the connections that you need if you want to go to the next level and those are my plans, to go to the next level,” Williams told ZAGSBLOG ahead of his public announcement Monday at his school. Ranked the No. 15 power forward in his class by 247Sports.com, Williams most recently took an official visit to UCLA Aug. 16-18 after unofficially visiting campus in December. He would be the Bruins’ first commit in the Class of 2023. “On the visit, it was really good, it was nice,” he said. “The weather was good. The campus is really big.” “UCLA was a great experience, the coaches are really good people and have a good relationship with my high school coach,” Williams told ZAGSBLOG. “The people are cool, the environment is great, nice weather, it’s California. It’s just a great place and they have a winning and very big program. He also feels head coach Mick Cronin and assistant Darren Savino can help develop him. “Every team has one or two versatile guys and I would just be one of those versatile guys, guarding every position, we need a bigger guard to learn the offense and do stuff with the ball, that would be me,” he said. “I will be able to get in the lane, finish with contact. When I get going, start knocking down some threes, I’m just making plays, making passes that the little smaller guards can’t make.” He joins power forward Devin Williams as UCLA’s second commit in 2023. “Brandon is one of the most versatile players to ever wear a PSA Cardinals uniform,” said director Terrance “Munch” Williams. “His upside is through the roof and at some point he should be a professional basketball player. “He’s a great young man off the court as well. God bless his journey.” Williams admits he’s a bit nervous about leaving the East Coast for the West. “I’m not going to lie, I’m nervous but it’s a challenge and a great opportunity,” he said. Before then, he has big plans for his senior year at Christ the King, where he will play alongside St. John’s commit Brandon Gardner. “My goal for my senior year at Christ the King is just to win a city championship, win states and possibly try to get Mr. New York before I leave,” he said. Follow Adam Zagoria on Twitter Follow ZAGSBLOGHoops on Instagram And Like ZAGS on Facebook