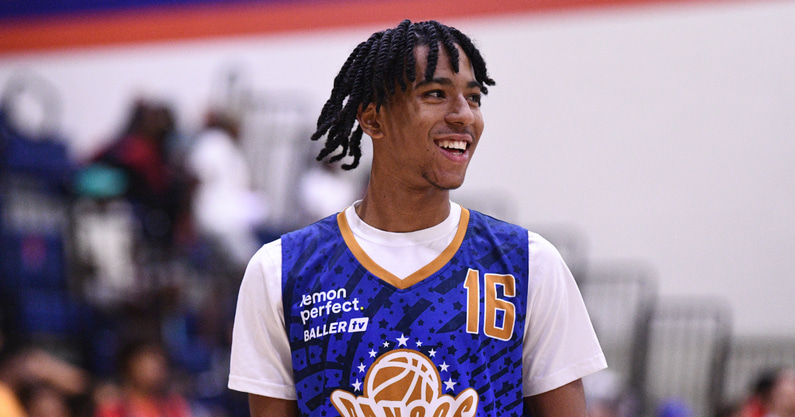 By ADAM ZAGORIA WHITE PLAINS, N.Y. –– North Carolina head coach Hubert Davis and assistant Jeff Lebo were among the latest high-major coaches to watch Class of 2024 point guard Boogie Fland on Thursday — and the open gym trip paid off with an official visit date. The 6-foot-3 Fland, a five-star prospect ranked the No. 2 combo guard in the Class of 2024 by 247Sports.com, will take an official to North Carolina the weekend of Sept. 30. “[Coach Davis] calls me every day, he does his share, just like everybody else in the NCAA that offered me,” Fland said Thursday at the New York Coaches Clinic at Stepinac which included Davis as a guest speaker. “They hit me up often.”

Davis, who led the Tar Heels to the NCAA championship game in his first season as head coach, is known to be high on tough, physical, skilled players from the New York/New Jersey area. In recent years he’s landed (or helped land) Cole Anthony, now with the Orlando Magic, R.J. Davis, a key member of last year’s national runner-up team who also played at Stepinac, and Class of 2023 Roselle (NJ) Catholic guard Simeon Wilcher, whom Davis and Lebo also visited this week. “Playing with King Rice and Brian Reese and Derrick Phelps and guys that had a chip on their shoulder and an edge about them in terms of competitiveness, that’s what you want because you want guys that have been through the fire,” Davis said, speaking generally about New York and New Jersey players. “College basketball is hard, playing at North Carolina is hard, you’re going to get knocked down and you want guys that have a fight to be able to persevere and get back up and continue to compete and I haven’t met anybody from this area that doesn’t have that in their personality.” A slew of high-major coaches have been through Stepinac in recent days, including Oregon’s Dana Altman, UConn’s Dan Hurley, Villanova’s Kyle Neptune, and Seton Hall’s Shaheen Holloway. “It’s exciting seeing them on the sidelines, it just means I gotta play up to expectations,” Fland said. “It’s just excitement , I enjoy it.” Many of these same coaches have also been through Cardinal Hayes in The Bronx for Ian Jackson, the No. shooting guard in 2024 per 247. This summer Fland and Jackson teamed up to help the USA U17 team win the gold medal at the FIBA World Cup in Spain. “I had to bring it all summer, I had to bring it all year round and I felt it just helped me grow as a person,” Fland said.

The Bronx native feels it makes a statement about the state of New York basketball that both he and Jackson were chosen for the U17 team. “I feel like it kept the dream alive that it’s not dead, we definitely got hoopers here,” he said. “But we don’t get the opportunities that me and Ian are getting right now, so I feel like me to get these opportunities opens the doors for New York City basketball players to come up and see what we’re doing. I feel it keeps the dreams alive for them.” He then played at Peach Jam with the PSA Cardinals 16U team. Now he’s back at Stepinac hosting coaches and planning visits.
Still, he’s in no rush to make any commitment. “Yeah, next year most likely,” he said. (Photo by Brian Rothmuller | Icon Sportswire via Getty Images) Follow Adam Zagoria on ZAGSBLOG Follow ZAGSBLOGHoops on Instagram And Like ZAGS on Facebook