The recruitment of Bronny James is heating up | Zagsblog
Follow @adamzagoria 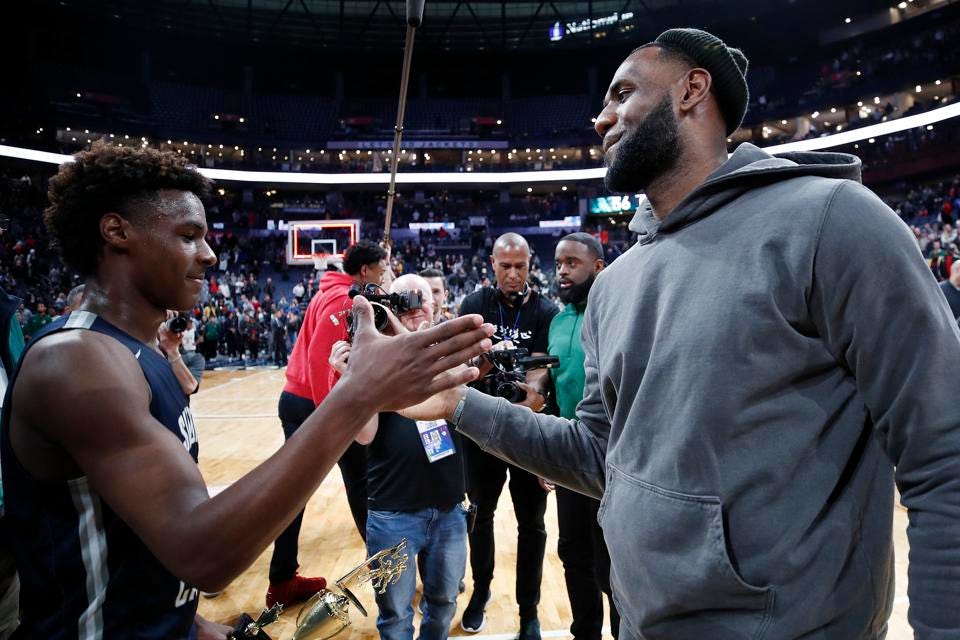 By ADAM ZAGORIA The recruitment of Bronny James won’t be a traditional one. After all, when your father is one of the greatest basketball players to ever play the sport, nothing in life is completely normal. “I don’t think I’ll be on the phone all the time with the mom and the dad like I usually am,” one head coach at a school with an interest in James‌ told Billy Witz and me for our New York Times piece at Peach Jam. On top of that, LeBron James has already said publicly he wants to play his final year in the NBA in 2024 with his elder son, so Bronny, who turns 18 in October, figures to be a one-and-done at whatever place he spends the 2023-24 season. (LeBron and the Los Angeles Lakers are discussing a two-year extension worth $98 million, according to multiple reports.) “Wherever Bronny is at, that’s where I’ll be,” LeBron told The Athletic, reprising a scenario from his childhood when Ken Griffey and his son, Ken Griffey Jr., played together for the Seattle Mariners. “I would do whatever it takes to play with my son for one year. It’s not about the money at that point.” Still, Bronny, a 6-foot-2 rising senior point guard at Sierra Canyon (CA), wants to experience as much of the traditional recruiting process as possible — and so colleges have begun to reach out. Southern California, Michigan, Ohio State, Oregon, Rutgers and Memphis, are among the schools to reach out to Bronny’s AAU coach, while others have reached out directly to the family. “Everything about Bronny is he’s a normal kid,” Ed Estevan, the Strive For Greatness coach and an assistant at Sierra Canyon, said at Peach Jam. “I understand he don’t have a normal life, but he’s just a regular normal kid. He wants  to experience all the other things that all the other kids get to experience. So he will be taking college visits, he will be on campus and doing all those things, too. “There are a lot of coaches calling all the time, ever since the first [NIke EYBL] session. From the beginning, people were just skeptical because they didn’t know what he was going to do. But now a lot of college coaches know that he has interest in college and that’s somewhere he will probably see himself going, so the phone is going off like crazy.”

Some of the top talent evaluators taking in the action tonight at Peach Jam pic.twitter.com/SNqx2T5Oe5

Most people in the industry expect that if Bronny does choose a college over a developmental option like the NBA G League or Overtime Elite, he will and up at a Nike-sponsored school. After all, the family’s connection to Nike runs deep. LeBron has been sponsored by Nike since he entered the NBA in 2003 and inked a lifetime deal with the company in 2015. The list of schools reaching out is mostly filled with Nike-sponsored programs. And they have other connections, too. Ohio State is where LeBron likely would have gone had he attended college. instead of becoming the No. 1 overall pick in the 2003 NBA Draft. Head coach Chris Holtmann and assistant Jake Diebler attended several of Bronny’s games at Peach Jam. Michigan is coached by Juwan Howard, LeBron’s former teammate with the Miami Heat. Memphis is coached by Penny Hardaway, a former NBA standout. Oregon is a flagship Nike program coached by one of the top coaches in the game in Dana Altman. USC is based in Los Angeles, near where the James family lives. Rutgers? Well, Rutgers is an Adidas-sponsored program that is a bit outside the box in this recruitment. “I mean, the list is pretty long of college coaches that’s calling,” Estevan said.

Most of these coaches watched Strive for Greatness last month at Peach Jam, where James, a 4-star guard rated the No. 8 shooting guard in his class by 247Sports.com, averaged 15.8 points, 5.8 rebounds, and 1.3 steals per game. Several blue blood schools like Kentucky, Duke and UCLA are not recruiting Bronny (at least so far) either because they already have strong lead guards committed for 2023 or are simply not involved in his recruitment. As we wrote in the Times piece, ‌if Bronny is not playing a prominent role, what coach would want the headache of explaining why — to fans, media, and James and his camp? “You become a normal person as a parent — you’re just looking for the best scenario for your child,” said Memphis’ Hardaway, himself a former N.B.A. star whose son, Ashton,‌ ‌ 18, is mulling whether to play at Memphis or elsewhere. “As a parent you want to make sure they’re being supported wherever they go.”‌ ‌ Meantime, a source close to the G League Ignite said the team likes Bronny, but it’s unclear if he would go that route.

For now, Bronny and his teammates with the California Basketball Club — a name that Sierra Canyon sometimes plays under — is touring Europe. They lost their first game in London last Thursday and will play Monday against the U18 French Select Team in a game slated to air on ESPN2 at 2 p.m. ET. On Thursday, James and his teammates will face Stella Azzurra in Rome in a game set to air at noon ET on ESPNU. “It’s not about winning out here,” Estevan said by text from Europe. “We are playing our whole roster. We want the kids to have a great experience out here.” Once they return from Europe, the schedule will get busy quickly, meaning Bronny would have to schedule any fall college visits around his team schedule. “Our preseason in the fall will start at the end of September and will go all the way into October, and then we’ll take a couple weeks off and just practice and then our regular season starts in November,” Estevan said. One thing’s for sure: Bronny’s recruitment figures to be one of the most fascinating story lines of the next year. Follow Adam Zagoria on Twitter Follow ZAGSBLOGHoops on Instagram And Like ZAGS on Facebook