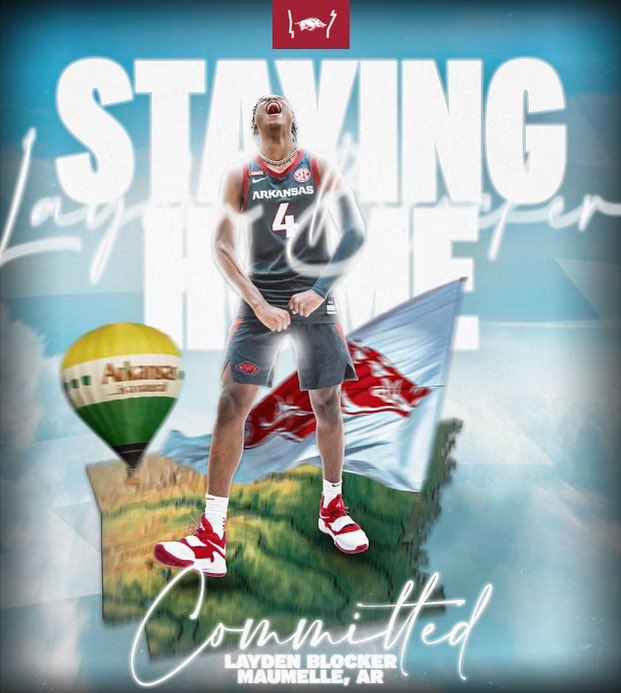 By ADAM ZAGORIA Layden Blocker, the 6-foot-2 four-star point guard from Sunrise Christian (KS), committed to Arkansas on Saturday. “I’ve decided to commit to the University of Arkansas, I’m staying home,” he told ESPN’s Paul Biancardi on an Instagram live. “[Coach] Eric Musselman plays and coaches very similar to the NBA,” he added. “I love the way he coaches and I just want to be a part of that program.” “I’m from Arkansas,” he told ZAGSBLOG recently. “They have a pro-experienced staff. Most of the things they do come from the NBA. Their guards have freedom within the offense. They play great in transition. Like I said, I like to get out in transition and play fast. They like to play up-tempo. When I went there for an unofficial, they said that most of the stuff they do is similar to the NBA. If I want to go to the league, that’s a good thing to go to a school that plays like that. I think they have a great system and a great program just like the rest of the schools in my top seven.” Ranked the No. 5 point guard in 2023 by 247Sports.com, Blocker also held offers from Baylor, Kansas, Kansas State, Arkansas, LSU, Alabama, Auburn, Maryland and others. “Layden has elite speed as a point guard with great pace and skill to make plays for himself and for others,” Sunrise Christian coach Luke Barnwell said. “His upside is high due to his athleticism and skill. I’m excited for one more ride his senior year at Sunrise.”

Someone needs to add a ⭐️ next to Layden Blocker’s name. He’s been hoopin like a 5 ⭐️ all summer 🦬@Laygogetit2 | @sunrisehoops pic.twitter.com/6RXrNILqaN