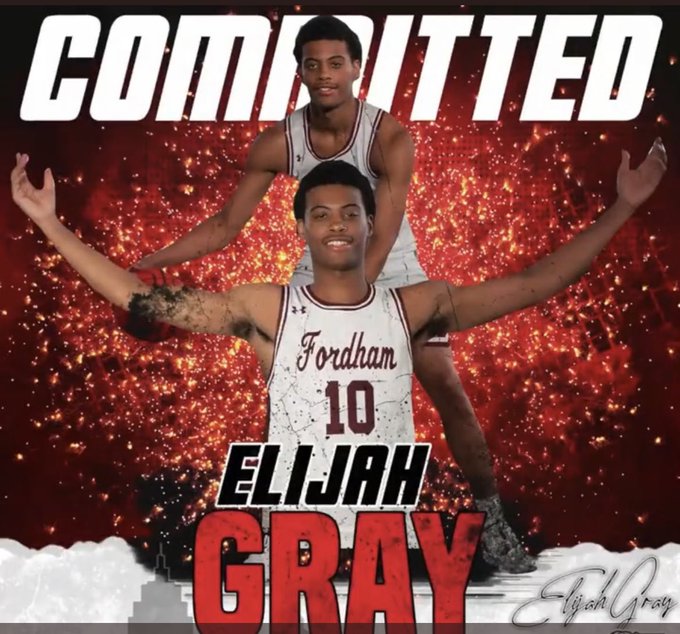 By ADAM ZAGORIA New Fordham coach Keith Urgo made a late addition to his roster when he landed a commitment from Class of 2022 small forward Elijah Gray. The 6-foot-8, 220-pound small forward out of Hargrave Military (VA) also considered UMASS, St. Louis, Tulsa, East Carolina and Murray State “New York City is the greatest stage in the world to put your talent on display and the style of play at Fordham will allow me to guard multiple positions and create matchup problems for opponents,” he said. “At my size I can handle, shoot and pass so off the defensive glass I’ll be able to add pace to our offense. I’ll add Coach Urgo and his staff made me feel like family right away. He didn’t just tell me what I wanted to hear during my recruitment which was different. The expectation is a high level of commitment. They are trying to build something special at Fordham and I want to be a part of that.” Gray averaged 17.1 points, 8.2 rebouinds 1.4 steals and 1.1 blocks while shooting 58% from the field and 38% from deep last season for Hargrave. He said he was also being recruited heavy by Maryland, N.C. State, Georgia Tech and Iowa “but these schools are looking around in the portal and are acting late on high school players so I decided to go where the love is.” He joins guards Noah Best, Will Richardson and Angel Montas and small forward Romad Dean in Fordham’s 20222 class. “I’m so excited for Elijah and his future at Fordham,” said Hargrave coach Tom Messinger. “He is an extremely versatile player that will cause matchup problems immediately in the A10. He is a legitimate 6’8” with a 7’0” wingspan and a frame that is still filling out. His ability to play off the bounce and shoot at a high clip from the perimeter makes him a hard guard for big men, while his size, physicality and touch make him hard to guard for smaller guys. He has the chance to make an impact from Day 1 at Fordham. “He has a legitimate chance to be the next NBA player out of Hargrave with his size and skillset. Coach Urgo and Coach [Dave] Paulsen did a phenomenal job on his official visit and he ended up cancelling other visits with another high kid major and a Power 5 school to commit to Fordham right away.” Follow Adam Zagoria on Twitter Follow ZAGSBLOGHoops on Instagram And Like ZAGS on Facebook