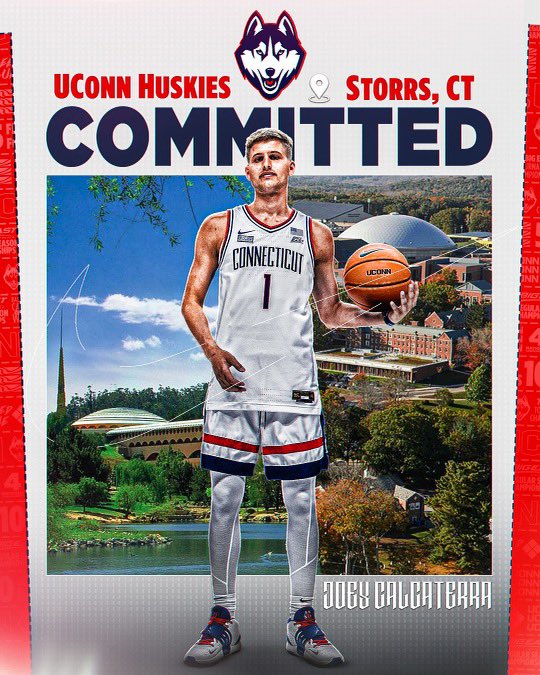 This release was provided via UConn Athletic Communications Joey Calcaterra, a 6-foot-3 guard who has put together a
solid four-year basketball career at the University of San Diego, will transfer
to UConn and play a fifth season in 2022-23 as a grad student for the
Huskies. Calcaterra is taking advantage of the extra season of eligibility offered by
the NCAA to athletes who were affected by the Covid-19 pandemic. A native of Novato, Calif., Calcaterra spent his entire college career at San
Diego, beginning with a redshirt season in 2017-18 following a stellar
career at Marin Catholic High School. At San Diego, competing in the West Coast Conference, he scored 862
career points, grabbed 237 rebounds, hit 115 three-pointers, shot .391
overall, .357 from three-point range, and .829 from the foul line. Calcaterra led the Toreros in scoring (13.3), shot 41.9 percent overall and
37.7 percent from three-point range, during the Covid-shortened 2020-21
season when the team played just 14 games. Last season, he appeared in 29 games, starting 23, and averaged 8.5
points, 2.8 rebounds, and shot .388 overall, .347 from three-point range,
and .872 from the foul line. Calcaterra and his parents visited UConn last weekend and watched the
Huskies’ summer workout. He becomes the fourth guard to join the UConn program during the off-
season via the transfer portal, joining Tristen Newton (East Carolina),
Nahiem Alleyne (Virginia Tech), and Hassan Diarra (Texas A&M). Follow Adam Zagoria on Twitter Follow ZAGSBLOGHoops on Instagram And Like ZAGS on Facebook