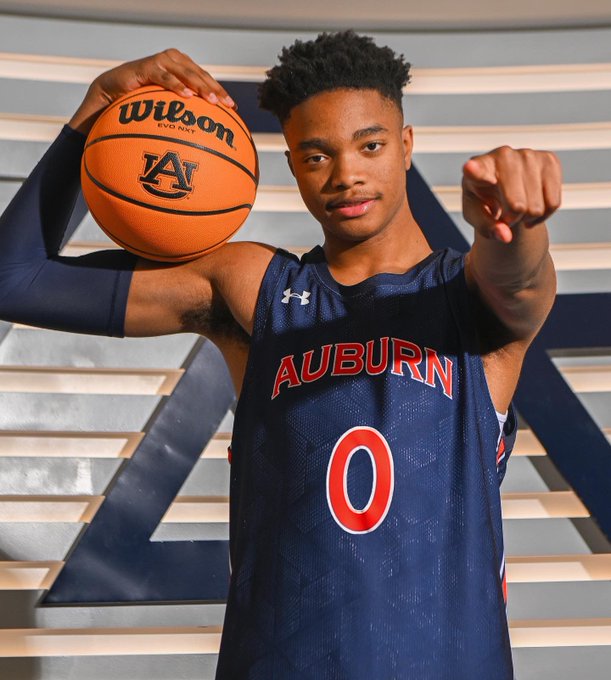 By ADAM ZAGORIA & CHARLIE PARENT K.J. Evans, one of the most highly sought after recruits in the Class of 2023, wrapped up a visit with Bruce Pearl and the Auburn Tigers this week. The five-star Montverde (FL) Academy forward raved about the culture at Auburn, telling Rivals.com’s Jay Tate, “The people here — they’re always waving…they just make it seem like a family here. The people are just made a lot better here.” Auburn’s big selling point for Evans has been the comparison between him and Jabari Smith, the potential No. 1 pick in next week’s NBA Draft. “If I put the work in, I think I can do something like that,” Evans told Rivals. “Not exactly like [Smith], but I can have the same impact.” Evans continued, “Defense, mainly, is what everyone looks at me for. That and shooting. I feel like I can shoot the ball. Dribbling the ball in the open court, too. I want to be a good decision-maker.” Kwame Evans Sr., K.J.’s dad, told ZAGSBLOG: “They believe he can come in and play like Jabari Smith. He added: “[We] love the coaching staff. They treated us really nice . And we got a chance to watch how hard they practiced as well.” The 6-foot-9 Smith said Thursday on a Zoom call that he has only met with the Orlando Magic and Oklahoma City Thunder, which hold the top two picks in the Draft. “I don’t see myself falling below 2,” he said. Aside from Auburn, Evans most recently visited Arizona and Oregon, and has had constant contact with UCLA, Kentucky, Indiana, and Texas. Evans plans to make his collegiate decision sometime during next year’s high school season. Follow Adam Zagoria on Twitter Follow Charlie on Twitter Follow ZAGSBLOGHoops on Instagram And Like ZAGS on Facebook