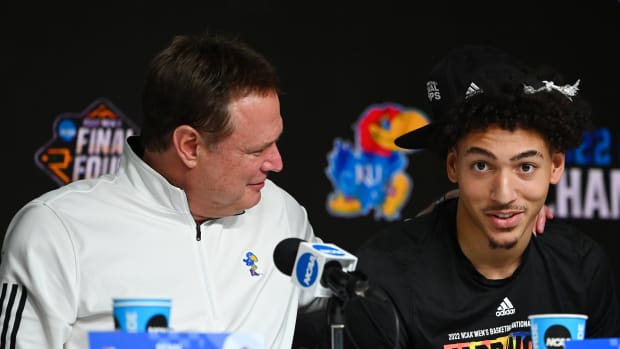 By ADAM ZAGORIA The reigning national champions got a double-dose of good news Wednesday when Jalen Wilson announced he was withdrawing from the NBA Draft and returning to Kansas, and Texas Tech guard Kevin McCullar announced he was pulling out and transferring to Kansas. The Jayhawks could now run out a starting five of Wilson, McCullar, Dajuan Harris, Gradey Dick and Ernest Udeh. “We are all very excited to hear the news today from Jalen and his family that he will be returning to school for the 2022-23 campaign,” Kansas head coach Bill Self said. “He’s gone through the process and the process did exactly what it is intended to do. It gave him the feedback he needed to make an educated decision. We’re proud of the maturity Jalen showed in making the decision and very excited to put him a position to where he can enhance his opportunities to not only play, but have a long career in the NBA. “Our team got a lot better today,” Self added. “As well as Jalen played last year, he is just scratching the surface of the entire player he can be for our program. I’m looking forward to the intangibles he will bring to this team as he and Dajuan (Harris) become the vets and the leaders of our program.” A redshirt-sophomore last season, this is the second-straight year Wilson has declared for the draft. Wilson retained NCAA eligibility while testing the draft process. Per NCAA rules, student-athletes can participate in the NBA draft process and return to college if withdrawn by June 1. Wilson ranked second in the Big 12 in rebounds with 7.4 per game and he was named All-Big 12 Third Team in 2021-22. The Denton, Texas, native’s 11.1 points per game were 19th in the league and his seven double-doubles were third. Wilson averaged 12.0 points and 9.7 rebounds in KU’s six NCAA Tournament games on its run to the 2022 NCAA National Championship. The 6-6 McCullar averaged 10.1 points and 4.6 rebounds last year as a junior. McCullar told Kansas beat writer Gary Bedore that Wilson is his “best friend.” “We’ve been best friends a long time, playing video games, growing up together,” he said. “I’m super excited he’s coming back as well.” Follow Adam Zagoria on Twitter Follow ZAGSBLOGHoops on Instagram And Like ZAGS on Facebook