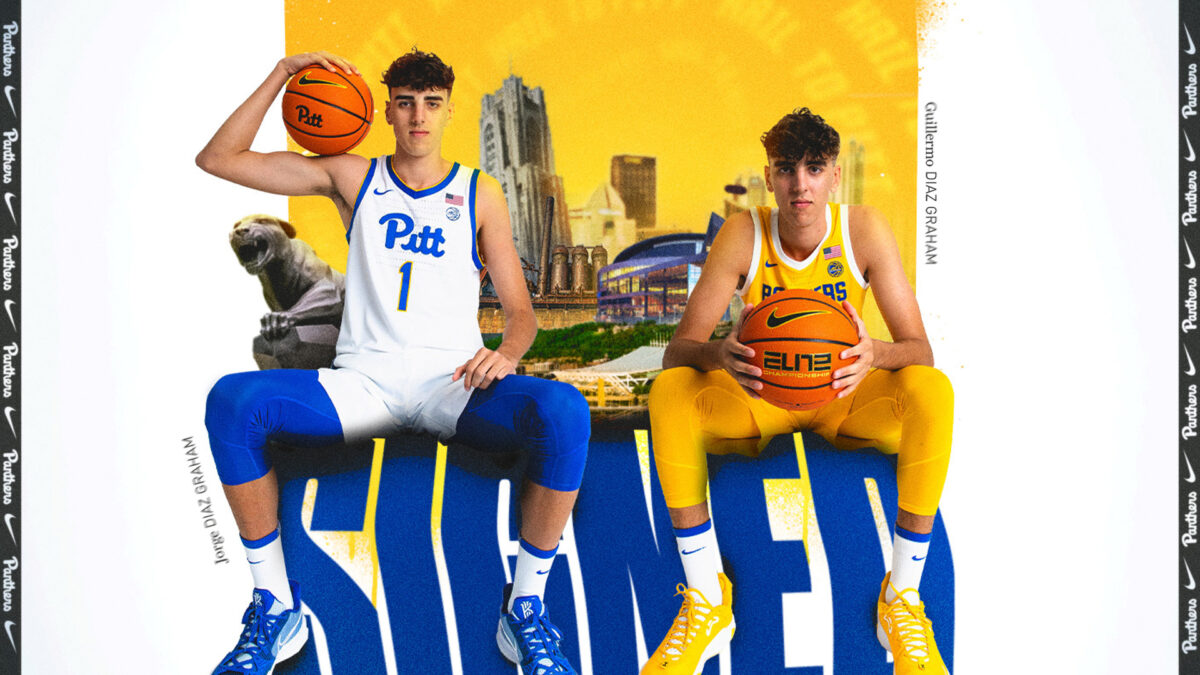 Pittsburgh has signed twin brothers Guillermo Diaz Graham and Jorge Diaz Graham , the school announced. The forward tandem played last season at IMG Academy after coming over to the United States from the Canary Islands, a Spanish archipelago in the Atlantic Ocean. “In Guillermo and Jorge, we are adding a pair of talented forwards with well-rounded skill sets that not only complement one another but also our current roster of players,” said head coach Jeff Capel. “They have both shown excellent shooting ability out to the three-point line as well as a strong overall feel for the game. They have each steadily improved their strength and overall athleticism since arriving in the United States last year and are poised to make an impact at the college level. We are excited to add them to our program and help them continue to develop their games”  Guillermo possesses a well-rounded offensive skill set with a reputation as an outstanding perimeter shooter and an excellent passer. At IMG Academy, he showed the ability to handle, shoot and pass from any position on the floor. Ranked No. 89 in the latest On3 Players Rankings, Guillermo led the Spanish U18 National Team to a 5-0 record at the 2021 FIBA Europe Challengers tournament in Skopje, Macedonia this past summer. He averaged 11..0 points, 5.6 rebounds and 3.0 blocks in five starts, including a 16-point, 5-rebound, and 6-block effort in the final game win over Serbia, 68-50. He shot 55.6 percent from the field for the event, including 70.8 percent (17-of-24) on his two-point attempts. Jorge displayed versatile offensive game from the wing at IMG Academy. He steadily improved this past season with added strength and athleticism leading to more confident play. Jorge made a big splash at the National Prep Showcase in February by knocking down six three-pointers and finishing with 33 points against Combine Academy and scoring 22 points in another game. He led IMG Academy in scoring for the season and jumped in the most recent On3 2022 Player Rankings to No. 76 overall. The Diaz Graham brothers join a Pitt frontcourt rotation anchored by 2022 All-ACC Honorable Mention selection John Hugley (14.8 ppg., 7.9 rpg.). The Panthers have also added 6-7 transfer Blake Hinson (9.1 ppg., 3.7 rpg. in 60 games at Ole Miss) and 6-11 JUCO transfer Fede Federiko (11.7 ppg., 8.6 rpg.) this offseason. The brother tandem will be ninth set of siblings to play on the same team at Pitt and the first since Orlando and Oliver Antigua (1995-98). They are also Pitt’s first international recruits from Spain. (Release/photo via Pitt) Follow Adam Zagoria on Twitter Follow ZAGSBLOGHoops on Instagram And Like ZAGS on Facebook