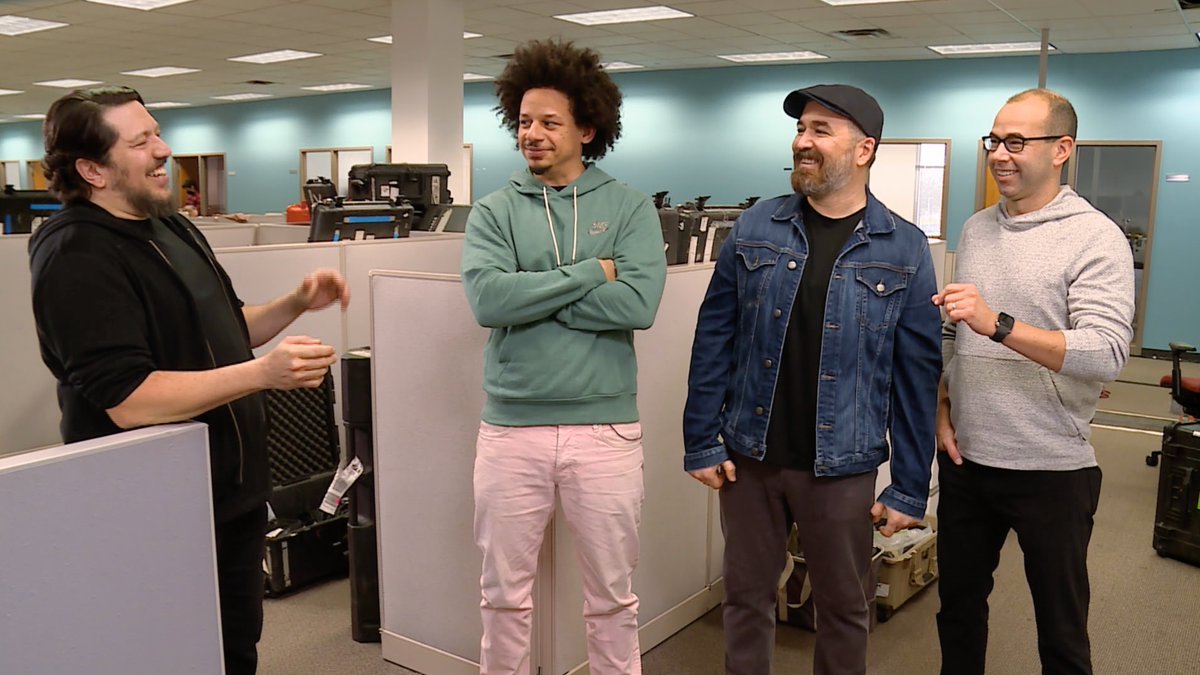 By ADAM ZAGORIA NEW ORLEANS — Brooke Shields and the Impractical Jokers? It doesn’t sound like a natural fit, but the comedy trio says the Princeton graduate and New York City native was a ton of fun when she appeared on the 10th season of TruTV’s hit comedy series which airs beginning June 16 (10 p.m.). “Brooke Shields, she’s the best,” Brian “Q” Quinn — who along with fellow Staten Island natives Sal Vulcano and James “Murr” Murray form the Impractical Jokers — said in an interview April 2 during the NCAA Final Four at The Roosevelt Hotel. “Brooke did stretch in a lot of different directions,” Quinn added of the 56-year-old star of Pretty Baby, The Blue Lagoon and Endless Love. “She even said afterwards, ‘People do not see me like this.’ And we were like, ‘That’s great, that’s great.’ She was really, really funny.” Other celebrity guests joining the show this season to replace the departed Joe Gatto include comedian Eric André, who appeared in a special episode April 2 following the Final Four that reached a record-breaking 7.2 million viewers across TBS, TNT and truTV. Appearing on upcoming episodes will be comedian Rob Riggle, Wu-Tang Clan rapper Method Man, Colin Jost of “Saturday Night Live” and wrestler Chris Jericho. The Jokers’ dream celebrity guest for a future episode is Alf, the wise-cracking Alien Life Form from the 1980s TV show. On the show, the Impractical Jokers compete by daring each other to do and say wild and crazy things in front of unsuspecting strangers at parks, supermarkets and other locations in New York City. In accordance with show rules, the loser must endure a punishment. Bringing celebrities like Shields into the mix added a new dimension to the show. “With these people and the skill set that they brought, we were able to approach the punishment from a different angle and do stuff that we kind of wouldn’t have done before,” Vulcano said.“They help punish us,” Murray said.

This season they will replace Joe by rotating a 4th person as a celebrity guest, including @ericandre, Brooke Shields and @ColinJost https://t.co/7WouGd8wK0 pic.twitter.com/pAWNbaOJbD

In Shields’ case, the Jokers had her do a “fake taping of a show called ‘Brooke of Love,’ Murray said. “It’s a dating show, she’s the host and we are the three eligible bachelors, but we have to be the worst bachelors on the planet.“ But this woman who’s the guest, she thinks it’s a real TV show, the audience thinks it’s a real TV show, and they can’t see us. We’re behind a screen like in the old dating shows, and it was so, so, so, so funny.” Quinn added: “The basic idea was that if you got chosen despite all of us being awful [bachelors], then you were in effect the least awful and the person who got chosen then had something terrible happen to them after they got chosen [as a punishment]. So it would behoove us to be as terrible as possible in order not to lose the next segment. So it was kind of like the worse you are, the better chance you have of not being chosen. You don’t want to be awful, but if you’re not as awful as the next guy you’re going to lose.” Said Murray: “I don’t mean to brag, but I got eliminated first.”“ And then the real punishment begins,” Quinn joked. When Gatto announced on New Year’s Eve he was leaving the show after splitting with his wife, Bessy, and needed to focus on helping to raise their two-young children, it wasn’t quite like the time George Harrison walked out on The Beatles in the middle of a recording session. But it left the remaining members of another famous quartet with a major void to fill. How should they go on without him? Should they continue as a trio? Or perhaps add someone like English actress Jameela Jamil? “I didn’t necessarily see it coming,” Quinn said of Gatto’s departure. “We just approached it like we still are having a blast, it’s still the three of us. These are still two of my best friends in the world. It was a switch for sure but there was so much good.” Murray said Gatto’s departure was “not ideal” but added, “When we’re pushed to figure something out, that’s sometimes when we get the best creative out of each other. And it happened that way, we had to understand how to do it without him and we changed a whole bunch of stuff, the most we’ve ever changed in the show in a decade…And I’ve been having as much fun and laughing as much as we always have.” Added Murray: “Joe is irreplaceable so it would be foolish to even try to replace him, so we changed the format of the show to have lots more different games between challenges but the biggest change is that we have different celebrity guests as part of the punishment in every episode. And that was hard and it took some figuring out because it had to be celebrities who are organic to who we are and what our show is. We don’t have celebs on the show just to have them.” The trio said truTV was “excited” about having celebrity guests “because it gives them something to promote.” But they didn’t want the show to be like “Saturday Night Live,” where celebrities come on each week to promote their latest movie or project and then move on. “It has to be people that we are interested in,” Quinn said. “So there was already a level of admiration and respect, and in most cases already a relationship.”As for Shields, she earned the respect of the comedy trio by stepping outside her comfort zone and fitting in seamlessly. “She had to carry a lot on her shoulders,” Quinn said, “and she did it flawlessly.” Photo: via Impractical Jokers Follow Adam Zagoria on Twitter Follow ZAGSBLOGHoops on Instagram And Like ZAGS on Facebook

Dave Chappelle defends LeBron, rips Laura Ingraham: 'My friend is the best at something and this b---h is not the best at anything'