Fresh off visits to Duke and Gonzaga, Top-35 guard Jared McCain is looking to cut his list | Zagsblog
Follow @adamzagoria

Fresh off visits to Duke and Gonzaga, Top-35 guard Jared McCain is looking to cut his list 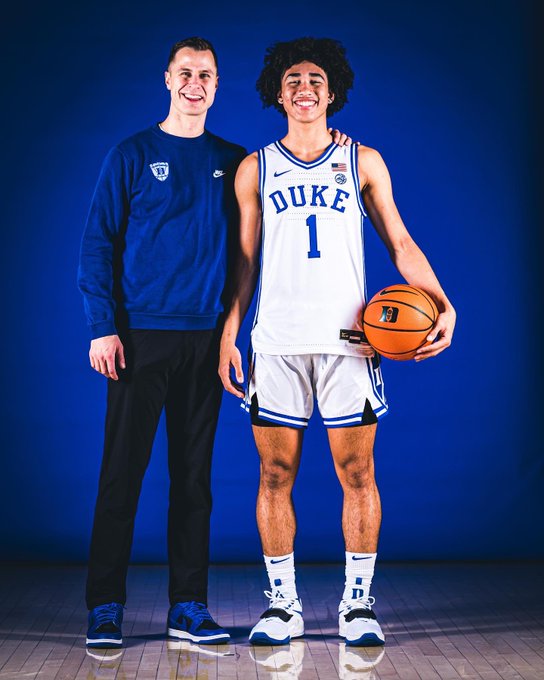 By JACOB POLACHECK Jared McCain, the nation’s No. 7-ranked shooting guard, has been busy in February taking official visits to Duke and Gonzaga as he looks to cut his list in the next few weeks. After taking visits to Louisville and Houston in the fall, McCain, the 6-foot-2, 175-pound guard from Corona Centennial (CA) High School, traveled to Duke from Feb. 6-8 for his third official visit. “That one was crazy. They keep a lot of stuff from back in the day, but it’s also super modern, so that was unexpected,” McCain said in an interview Wednesday. “I didn’t know what to expect going into either of these visits.” McCain had the opportunity to meet Duke head coach Mike Krzyzewski in his final season ahead of the Blue Devils’ Feb. 7 contest against Virginia. “I didn’t know if we would get to talk to him,” McCain said. “He was super cool. He talked to my parents, talked to me a lot. It was just really nice to see that they care. Even though Coach K won’t be the coach, he said he’ll still be going to everything and watching everything. That was super cool. Just seeing the atmosphere there, that was insane. I knew it was going to be crazy with the Cameron Crazies and watching the game. Duke was insane.” With five-star guard Caleb Foster already committed to Duke for the 2023 class, head-coach-in-waiting Jon Scheyer pitched a free play style as a main selling point. “Coach Scheyer is going to implement ball screens and pin downs with comparisons to guys like J.J. Redick and Seth Curry, coming off ball screens and coming off pin down screens for me,” McCain said. “That’s perfect and just what I like. I like to play with that freedom that Scheyer was emphasizing.” The following weekend, McCain made the trip to Spokane for an official visit to Gonzaga from Feb. 12-14. “I did not expect their fanbase to be like that,” McCain said. “They were chanting my name. They had signs. They chanted my name like six times. That atmosphere was insane. I didn’t expect that at all.” McCain said he had the opportunity to meet with coach Mark Few and watch the Super Bowl at his house. “Everyone was there. All of the coaches kid’s all get along. It’s cool to see. The players are always there,” McCain said. “I got to hang out with them for a little bit. They were also talking about that freedom, which I love. They made direct comparisons to even guys like (Andrew) Nembhard and Jalen Suggs, not the athleticism or anything like that, but the freedom to come with ball screens and make a decision. He was talking about making your own decisions and not having a structured set.” Looking ahead, McCain says he would like to cut his list to “four or five” schools at the end of his high school season in the coming weeks. He says Duke, Gonzaga, UCLA, USC, Houston, Louisville and Texas Tech are the main schools involved. “That trust with the coach is something that I mentioned before and it keeps coming up,” McCain said. “It’s going to be hard to differentiate that, but I’m looking at the trust between the coaches and the players, that you can play through mistakes – I’m always looking for that.” McCain says he’s also looking to see how a coach reacts when a player makes a mistake. “Obviously, they’re going to get upset about turnovers, but nothing too crazy,” he said. “I like to see the trust between the coaching staff, the family atmosphere, how they treat their players and how it is out there.” Follow Jacob Polacheck on Twitter Follow Adam Zagoria on Twitter Follow ZAGSBLOGHoops on Instagram And Like ZAGS on Facebook