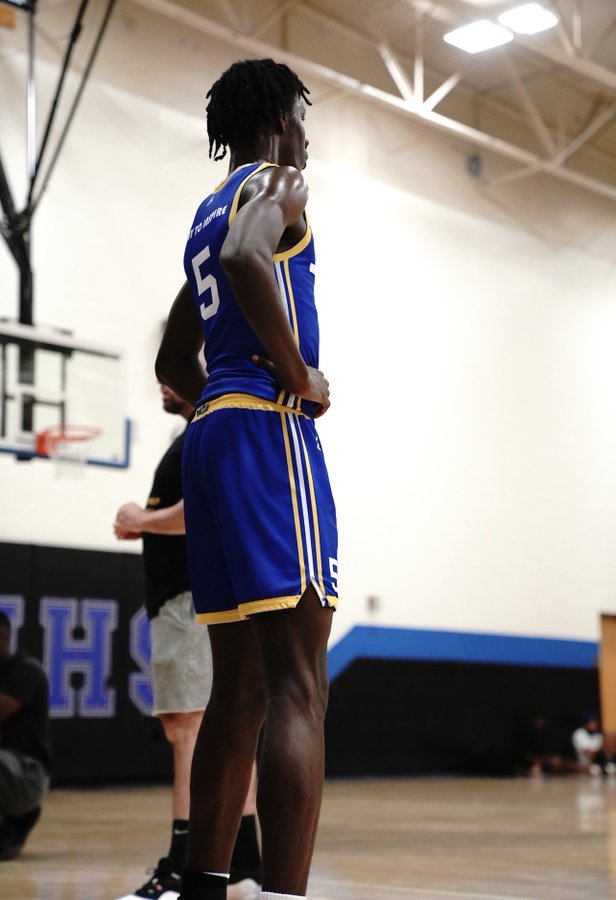 By JACOB POLACHECK Class of 2024 five-star forward Jason Asemota has been a hot commodity on the recruiting trail, reeling in offers by the day. The 6-foot-8, 190-pound small forward from Hillcrest (AZ) Prep and the Expressions Elite AAU Program, says he’s open to all schools and is nowhere near a cut list or a decision. Ranked by 247Sports.com as the No. 12 overall prospect in the class of 2024, Asemota says he’s looking to visit Oregon in April, Kansas over the summer and potentially Ohio State as soon as the next two weeks. “With that being said, I love Oregon and I love Kansas. Both of those schools were a dream when they offered me,” Asemota said in an interview. “I want to say those are the two schools I’m really looking forward to visiting and looking forward to building a relationship with.” Asemota broke down each program: Oregon: “Ever since I was a little kid, I always looked up to guys like Bol Bol, so when he went there, I always looked at Oregon as a dream. I wanted to do that. I like how they shoot the ball, how they’re in the Pac 12 and how they get up and down the floor, play defense and play hard. I really believe in coach Dana Altman. He’s a great coach. He wins with whatever guys he has. I feel like him being a good coach and me being the player I am, we could work off of each other. That could possibly get me to my ultimate goal which is to play professionally.” Kansas: “Their pitch has been, we know how you like to shoot the ball and we know how you like to go up and down the floor. We could really do that for you here at Kansas. I love their winning program. I love the environment that I see on TV everyday. They always have a lot of fans there and a lot of students there, so I feel like their environment is really a deal breaker in a school for me. If their environment is good and their crowd really gets into the game, all those close games could really go in your favor. I really like Kansas for their winning aspect and their environment on and off the court.” Ohio State: “I really love the connection I have with coach (Tony) Skinn. He’s Nigerian just like me, so we connect on that level. Outside of basketball, he’s trying to help people from the same place he is. I really feel like he’s not just doing it for basketball, but he’s doing it for me as a person. I really like the relationship between me and coach Skinn. We talk not daily, not weekly, but often. Our relationship is cool. I like Ohio State and what it stands for.” Asemota has also recently added offers from Texas Tech and Memphis, breaking down each program: Texas Tech: “There’s not much I know about the program, but I do have a couple guys that I know that go there right now. They said they love it. They said the environment there, the fans and the crowd is really into it. They said it’s a home there. I’m looking forward to connecting with the coaches and really getting the relationship started so I could learn more and over the next month, I’ll have a lot more to say about Texas Tech.” Memphis: “Penny (Hardaway) called me with my coach on the phone. It was great. He told me that he’s really getting to know that you need certain players to win. He’s looking at me to be one of those positions. He’s really selective about who he hands out offers to, so I’m very appreciative that he handed one to me. Penny is a great guy.” As he navigates the recruiting process, Asemota says he’s taking play style, relationships and a family atmosphere into consideration. “If the college is really into the basketball program and everything off the court,” he said. “Education-wise, if basketball doesn’t work out, what I can really get out of the college that I go to. I just want a coach that believes in me as much as I believe in myself. That’s what I’m looking forward to in my upcoming visits.” After transferring from Brewster (NH) Academy to Hillcrest Prep over the summer, Asemota has adapted to the speed and pace of the prep game, while working intensely on improving his shot selection. “I come from a place where I would shoot every shot I could think of,” he said. “Coming here, thinking about the right plays, making the right decisions, making winning plays and having a better shot selection is what I’ve been working on.” Follow Jacob Polacheck on Twitter Follow Adam Zagoria on Twitter Follow ZAGSBLOGHoops on Instagram And Like ZAGS on Facebook