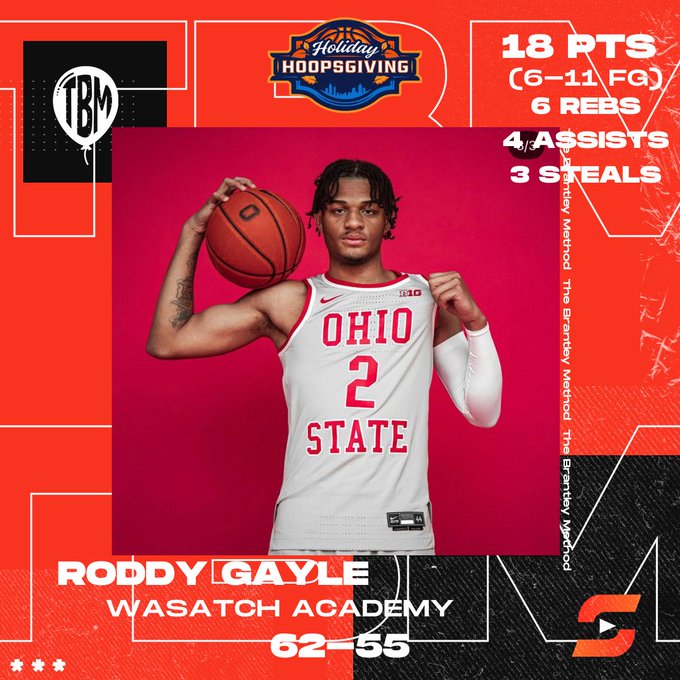 By JACOB POLACHECK ATLANTA – Wasatch (UT) Academy guard Roddy Gayle gave Ohio State fans a lot to be excited about with a tremendous performance at the Holiday Hoopsgiving over the weekend at Shiloh (GA) High School. Gayle’s best game of the weekend came in a 62-55 win over Pebblebrook (GA), going for 18 points on 6-for-11 shooting, while adding six rebounds, four assists and three steals. “I feel like there was still a lot more I could’ve done on the floor,” Gayle said after the win. “It’s the first game this season, so we were just trying to get the wrinkles out.”  The 6-foot-4, 195-pound shooting guard announced his commitment to Ohio State on Nov. 13, 2020 before signing his NLI with the program earlier this month. “Ohio State felt like home. That’s where I want to be,” Gayle said. “I felt like I was leaving my home and being accepted into another one. I thank the Buckeye community and I just can’t wait to get to college and do the same thing there.”  Ranked by 247Sports.com as the No. 4 shooting guard and No. 56 overall prospect in the class of 2022, Gayle is part of an incoming Top-10 Ohio State recruiting class that features four-stars Bruce Thornton, Felix Okpara and Bryce Sensabaugh, as well as three-star shooting guard Bowen Hardman. “You’ve got a winner,” Gayle said in his message to Ohio State fans. “Next year, during the season, I’m going to make sure we win for sure. We’ve got to get a natty.”  In his time between now and next fall, Gayle says he wants to improve his ability to score and defend at the next level. “Playing in the league we’re playing in, we see some of the best talent grounds,” Gayle said. “I believe that’s going to help me a lot with where I want to be next year and years to come.” Follow Jacob Polacheck on Twitter Follow Adam Zagoria on Twitter Follow ZAGSBLOGHoops on Instagram And Like ZAGS on Facebook