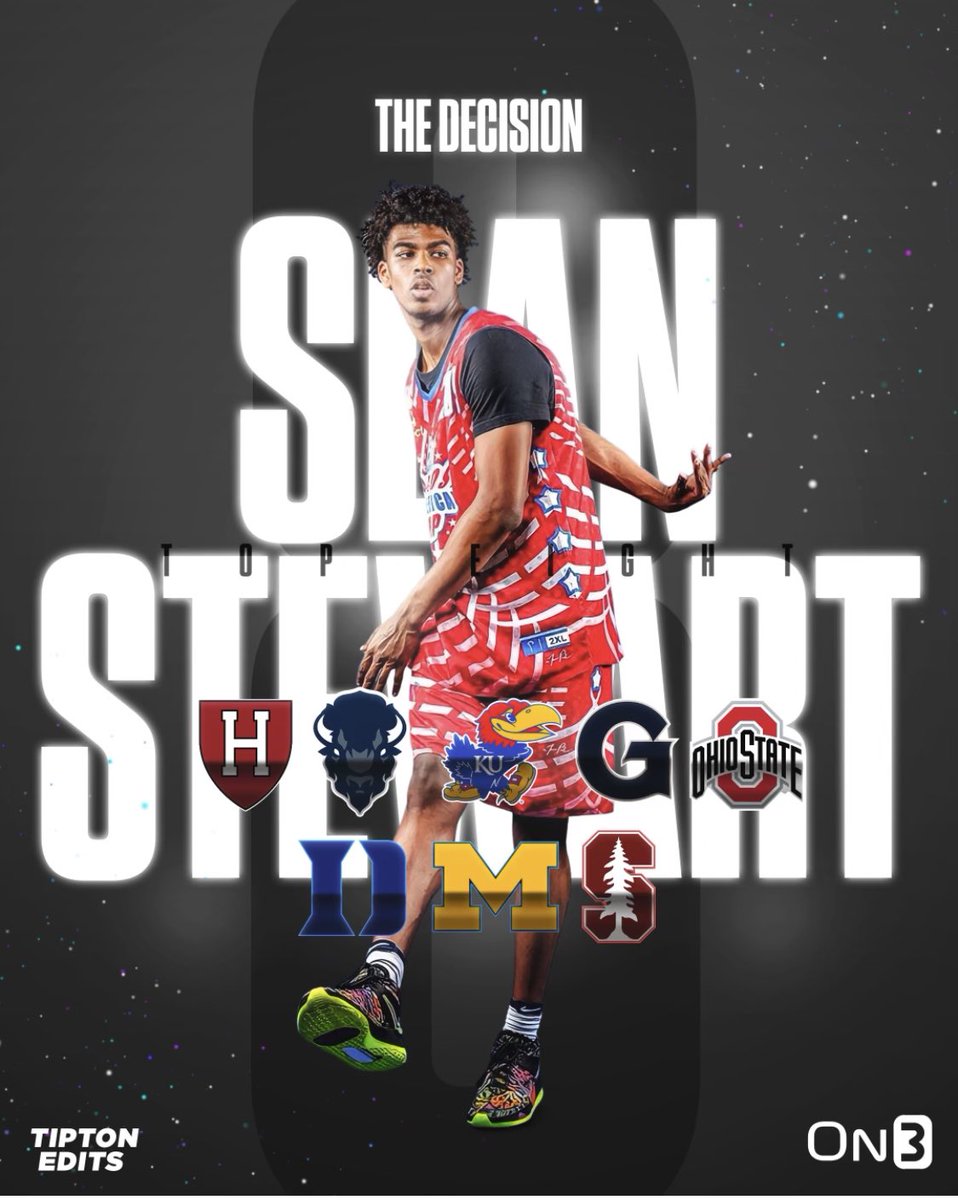 By ADAM ZAGORIA Sean Stewart, the 6-foot-8 4-star forward from Orlando (FL) Windemere visited Duke on an official visit recently and is considering eight schools in his recruitment. Stewart is down to Duke, Georgetown, Michigan, Stanford, Ohio State, Kansas, Harvard and Howard, and is targeting a decision before the end of the school year next May. “The Duke visit was great,” his father Michael said by phone of the visit the weekend of Nov. 5. “We’ve been there plenty of times over the years, watched games and checked out campus. It was nice to meet and connect with the staff and get a chance to see Coach K work one last time. “Their message is very similar to some of the other high-academic schools. It’s a four-year decision, but on top of that it’s the best of both worlds. Not only do we have a world-class education but we have maybe the most popular basketball program in the country with as much history as anybody else. And with the new staff coming, we’re well-positioned to change a couple things but kind of keep this thing rolling.” Jon Scheyer is the coach-in-waiting at Duke and recruited their No. 1-ranked recruiting Class in 2022, as I wrote in this NY Times piece. Scheyer is also taking the lead in the Class of 2023, as one would expect. “Coach K is leaving this year, it doesn’t do any good to recruit any kids moving forward,” Michael said. “But he is present to come over and say hello and give his thoughts on the program and to give a kind word or two but it’s mostly Scheyer and Chris Carrawell.“ Asked how heavily they are considering Duke, Michael said with a laugh, “Very heavily. They’re up there. It’s a really good situation. He has a chance to play in the 2023-24 season with a lot of other good young players that they’re probably going to bring in. It’s close to home, it’s a short flight to Raleigh. Sean was comfortable on campus, he was comfortable with the players, he was comfortable with the staff. It’s up there. That’s a great situation.” The Stewarts have now taken five officials to Stanford, Michigan, Georgetown, Ohio State and Duke, and an unofficial to Harvard. They hope to visit Kansas sometime this season for a game. “”The only other place we’ll probably go is Kansas to watch a basketball game,” Michael said. He then proceeded to break down the messages at some of the other suitors: Ohio State: “Ohio State’s looking for a couple versatile, 6-8, 6-9 bigs to add to their 2023 class. They use kids like EJ Liddell and Keita Bates-Diop and those type of kids as major drivers for their offense so it’s a good situation for kids that look like them to come in and contribute.” Stanford: “Stanford, same thing. Everybody’s moving towards positionless basketball where they have four out, one in, or a point guard and a center and three guys that can do a lot of things. So as they build out their rosters, it’s important to have kids that are big, versatile players that can create mismatches, that can post, get out on the wing and bring the ball up the court. So as they build out their rosters, I think players like Sean can have some value in those programs and they’ve demonstrated that to us.” Michigan: “Michigan is also a pretty cool place. Juwan Howard is a special person. He just signed a five-year extension. I really have a lot of respect for him and what he’s done throughout his career as a player and a coach. He’s done it the right way each step of the way. Miami has a different culture and it’s hard work, work ethic, personal accountability and he’s bringing that to Michigan, so those kids, he gives them a lot of freedom but he holds them accountable and he develops. Develop, develop, develop. Him and his staff do a great job of teaching, they’re on the court, they’re teaching. And it’s a family environment up there. Obviously, Juwan’s going to have his two kids [Jett and Jace] on the team next year but all of the kids are close. They’re good kids and it all comes from their leader. “Obviously Michigan’s a great school but their message is you can come here, you can get better, and you can be around a bunch of kids that are just like you. And when Sean went up there he had a great time with those players. He had a great time on campus and he had a great time with Juwan. I think Sean’s biggest takeaway from the Michigan trip was, I really like Juwan Howard. And I think we all felt the same way.” Georgetown: “Patrick [Ewing] and Juwan are very similar. Great respect for what he’s done. It’s a good staff. They are obviously not as far along basketball-wise as Michigan but they’re building brick by brick. Patrick wants to bring in good kids that I can build a program with and last year they won the Big East championship and they want to continue to add pieces to keep that momentum going.” Howard: “I have an older son [Miles] who plays at Howard in DC so a major consideration for Sean is maybe I want to play close to my brother.” Going forward, they make visit some schools for games during the season as they continue to narrow down their list. “We’re going to continue to narrow this list down and hopefully make a decision before the end of the school year, maybe sooner,” Michael said. “I’d say before May.” Follow Adam Zagoria on Twitter Follow ZAGSBLOGHoops on Instagram And Like ZAGS on Facebook