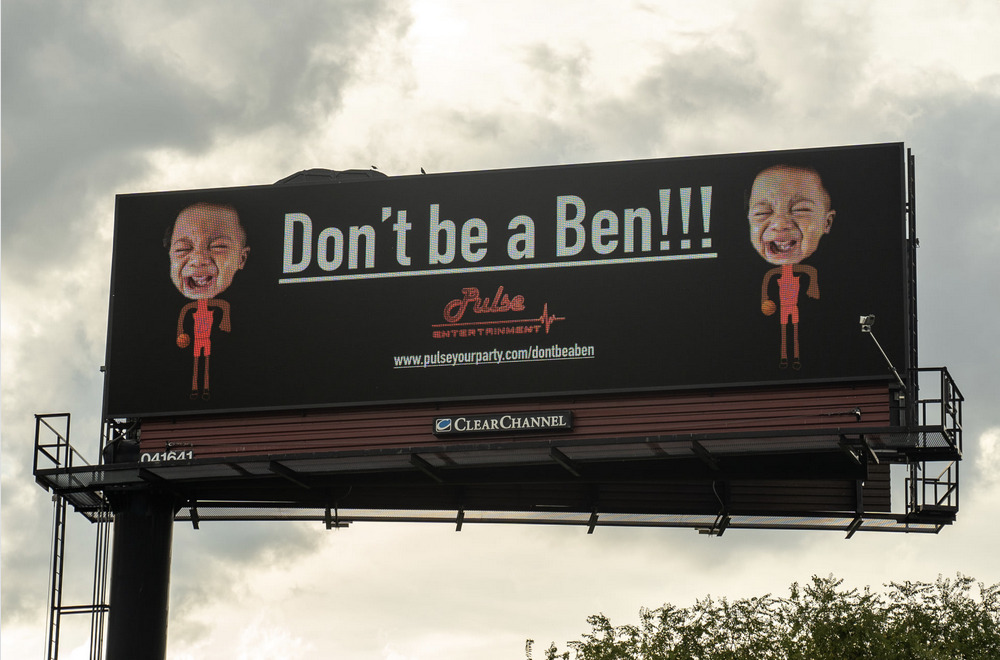 A new Ben Simmons billboard by the South Philadelphia Sports Complex and the Wells Fargo Center is creating a stir this week, only adding further fuel to the fire on the city’s contentious relationship with the young star. “Don’t be a Ben” says the billboard, located on I95 right by Exit 17 (Sports Complex / The Navy Yard), and places a kinder, gentler tone on Philadelphia trash talk. It’s a male-centric play on “Don’t be a Karen” and a G-rated play on “Don’t be a b***h.”  “Ben Simmons is a party pooper, a crybaby and really hard to sympathize with while making $146 million over the next four years,” said Ross Akselrad, the founder of Pulse Entertainment, who funded the billboard. “We like people who enjoy having fun, enjoy the spotlight and like taking shots — either the basketball or adult variety.” The billboard, which will run throughout the week, features two crying babies with oversized heads in basketball uniforms and the words “Don’t be a Ben.” There is also a URL for Mr. Akselrad’s website, www.pulseyourparty.com/dontbeaben, for members of the region who enjoy having a good time and may need assistance in planning those services. For those interested in the uber-hot world of digital collectibles, Baby Ben is available as a limited edition 1/1 NFT here. Pulse Entertainment is the East Coast’s full-service one-stop shop for those looking to plan and throw a party, including weddings, Bar/Bat Mitzvah’s and corporate events, with a staff consisting of DJs, MC’s, dancers, photographers, lighting specialists, videographers and “out of the box thinkers.” Mr. Simmons has been banned by the company from utilizing its services with the exception of hosting a children’s themed birthday party for himself.  “If he wants to have a party and cry if he wants to, we’ll probably let him.” said Cole Yeager, an Executive Vice President for Pulse Entertainment who came up with the “Don’t be a Ben” slogan after being yelled at by his wife for using a vulgarity around his toddler while venting about Simmons. “We’ve had to tell our child “not to be a Ben” on more than one occasion since coming up with the slogan. So we figured, why not put it on a billboard and encourage others to do the same? It’s a teachable moment.” The billboard, which cost $2,000, will be visible for fans attending games at the Sports Complex this week including the Sixers Thursday night game against the Pistons and their Saturday night matchup against the Hawks. Follow Adam Zagoria on Twitter Follow ZAGSBLOGHoops on Instagram And Like ZAGS on Facebook