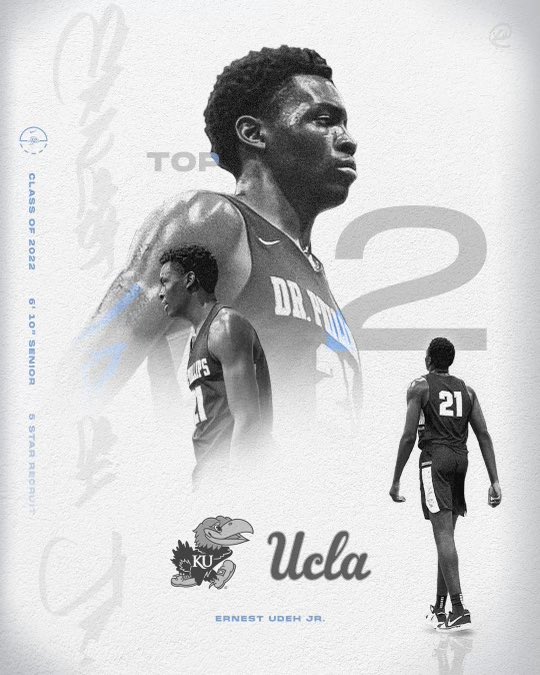 By JACOB POLACHECK Class of 2022 four-star center Ernest Udeh Jr. will announce his college decision on Wednesday, October 20, he announced Wednesday via Twitter. Udeh, the 6-foot-10, 230-pound big from Dr. Phillips (FL) High School and the Southeast Elite AAU Program, will decide between Kansas and UCLA. Ranked by 247Sports.com as the No. 7 center and No. 27 overall prospect in the class of 2022, Udeh took his official visit to UCLA from Oct. 1-3 and to Kansas from Oct. 8-10. He broke down each school for ZAGSBLOG in August: Kansas: “It’s hard to ignore the success they’ve had with their bigs, especially with their play style, how they play through their bigs constantly, day in and day out. With Joel (Embiid) and Udoka (Azubuike), how they developed them into being able to go pro. I just feel like them being able to work with me as a big and me, being able to fit their system pretty well is pretty good. Doing a good job to get me to the next level, I feel like that’s one of the things that stood out to me.” UCLA: “It’s one of the schools, like I said, that will play with me, not just having me in catch-and-finish plays, but actually having me being involved in the offense. It’s another one of those schools where I would be able to come and make an impact from day one. I had a Zoom recently with them, just talking over the basketball side of things. They broke down my film, telling me what I need to work on, what I’m great at, what I can improve on, just making me better as a person and a basketball player. I really appreciate them for that.” Follow Jacob Polacheck on Twitter Follow Adam Zagoria on Twitter Follow ZAGSBLOGHoops on Instagram And Like ZAGS on Facebook