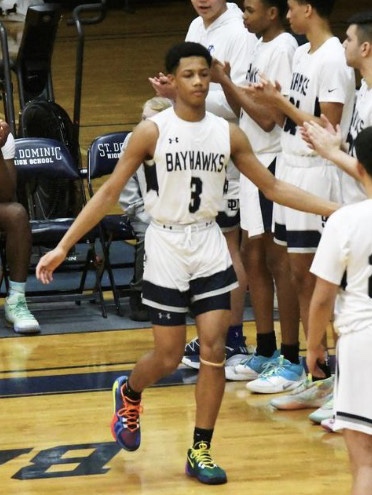 By ZACH SMART Since adapting to the day-to-day grind at national power Scotland Campus Sports (PA), Long Island native Khalil London has transitioned quite seamlessly. As a 6-foot-3 combination guard with toughness, length, and a versatile scoring repertoire, the Class of 2023 guard also brings a bit more above the rim athleticism than he’s credited for. London holds an offer from Bryant, and Rutgers and Georgetown have recently been in to see him. He could certainly catapult his stock with a prominent role on Scotland Campus’ plenty tough national team. Both Rutgers and Georgetown have been actively pursuing London because of his poise and IQ and multiple extravagant dunks. “He’s fitting in really nicely so far,” said Scotland Campus head coach Chris Chaney, the all time winningest prep coach in his age group and a guy who has nurtured myriad Division-1 players the past 20 years.  “He loves to compete and that’s the great thing about Khalil. He doesn’t shy away from the bigger players. The guys love playing with him and he brings a toughness and a mentality that his teammates feed off.” With his defensive versatility, development of a consistent mid range and outside shot, London will subscribe to the veritable “Mr. Everything” role at Scotland. He’s got the handle and shiftiness and purity of vision to quarterback a team. He’s also noteworthy as a shot maker and a ball hawk capable of eliciting turnovers and quickly converting them into transition leakout baskets.  Rutgers assistant coach TJ Thompson, who authored a memorable four year career at George Washington University and played for Chaney at the Newport School in Maryland, has been in contact with London. Georgetown assistant Akbar Waheed has also spoken with the under the radar junior London and appears intrigued. Follow Zach Smart on Twitter Follow Adam Zagoria on Twitter Follow ZAGSBLOGHoops on Instagram And Like ZAGS on Facebook