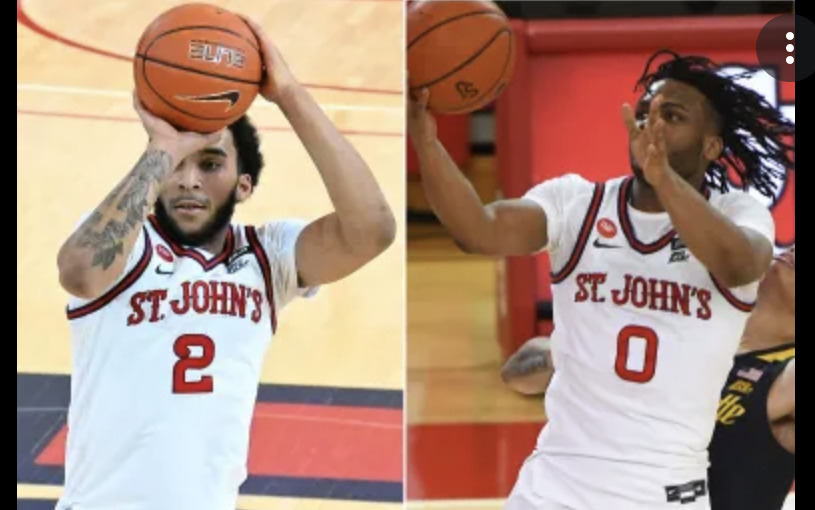 By ADAM ZAGORIA WHITE PLAINS, N.Y. — Julian Champagnie led the Big East Conference in scoring a year ago as a sophomore and was among the league’s leading rebounders. Freshman Posh Alexander was a defensive force en route to being named the conference’s Freshman of the Year and Defensive Player of the Year. So with the 2021-22 season set to begin in a couple of months, what can the two Red Storm stars do for an encore? Head coach Mike Anderson believes both players can take it to another level. “Take that next step,” Anderson told ZAGSBLOG Thursday at a coaches’ clinic at Archbishop Stepinac High School that featured several other Big East coaches and Iona’s Rick Pitino. “[Champagnie] did everything the right way. He got the [NBA] feedback and I see a focused guy coming back,” added Anderson, the reigning Big East Coach of the Year. “Obviously, Posh he did something that hasn’t been done since Allen Iverson: Defensive Player of the Year as a freshman and Freshman of the Year. With that being said, now the target’s on him, so what can you do to get better?” The two Brooklyn natives and former AAU teammates led St. John’s a fourth-place finish in the Big East after the team was picked ninth. Champagnie led the Big East in scoring at 19.9 points per game, and notched a team-high 7.3 rebounds. When it came time to hand out Big East Player of the Year honors, he was left out as the Villanova duo of Collin Gillespie and Jeremiah Robinson-Earl and Seton Hall’s Sandro Mamukelashvili shared the honors. Asked if Champagnie was motivated by being excluded from the group, Anderson said: “No, I think that’s Julian in and of himself. I think that’s the next step. If you look at coming in, he was getting ready to go to prep school and he was All-Rookie team. Next year this guy was the Most Improved. He leads our league almost in rebounding and scoring. “And so what is the next transition for him? He’s shown that he’s one of the better shooters in the country. Now I think the feedback he got on ball-handling, his body is getting stronger, become better defensively, he’ll do those things. I think Julian’s motivation is himself.” Alexander, generously listed at 6 feet, can become even more of a force after averaging 10.9 points, 4.3 assists, 3.4 rebounds and 2.6 steals. “Oh, I think Posh can take it to another level,” Anderson said. “I think he’ll have a good year, he’ll be one of the top assist guys in our league. That’s what a young guy like that has to be, he’s got to be able to create and make other guys better and I think he will do that.” He added: “He has that right mindset. He’s got the grit and the toughness. I think the best thing that happened to him is we got some older guys in there now. You got more maturity now with the transfers. He sees how serious those guys are about their game and it’s kind of infiltrating into our team.” TRANSFERS SET TO MAKE AN IMPACT During the off-season, Anderson used the transfer portal to add Joel Soriano (Fordham), Aaron Wheeler (Purdue), Stef Smith (Vermont), Montez Mathis (Rutgers) and Tareq Coburn (Hofstra). “We got some guys from winning programs,” Anderson said. “Stef Smith from Vermont, he brings a great work ethic to the table. Montez Mathis came from Rutgers, used to winning, and I love his toughness and his grit. He’ll be a great defensive player and can score. Aaron Wheeler comes from a winning program and is hungry. Tareq, he’s a guy that we got late and I think people are going to be in for a treat with him and what he brings to the table “And then you talk about Joel, he gives us something we haven’t had, a guy with size and a great pair of hands. Really a great passer, gives us a presence on the block. NCAA TOURNAMENT TEAM IN THE MAKING For what it’s worth, Athlon Sports has St. John’s among four Big East teams in the Big Dance — along with Villanova, UConn and Xavier — while Lindy’s has Villanova, UConn, Creighton and Xavier making it. Providence coach Ed Cooley is among those who thinks St. John’s is under-valued and will surprise some people. “I think the league is definitely going to have six or seven teams vying for an NCAA position just because of the age, the experience, the size, obviously the level of coaching is always very competitive,” Cooley said. He added: “I think [Villanova] will be really good. I think Connecticut is going to be very good. I think Seton Hall will be very good. No one’s talking about St. John’s, I think St. John’s is one of the more under-rated teams in the country. And I think Xavier and Butler bring back a ton of experience. And I think they’re not being talked about at the national level.” Asked if he believes his squad is an NCAA Tournament team, Anderson said, “I like where we’re at. I think we’ve got a lot of work in front of us and I think we’re going to end up where we want to be.” Anderson also said he’s “anxious to see fans in the stands” after the Covid year. “It’s just like coming here,” he said. “It’s good to see coaches up in the stands for a change.” Photo: NY Post Follow Adam Zagoria on Twitter Follow ZAGSBLOGHoops on Instagram And Like ZAGS on Facebook