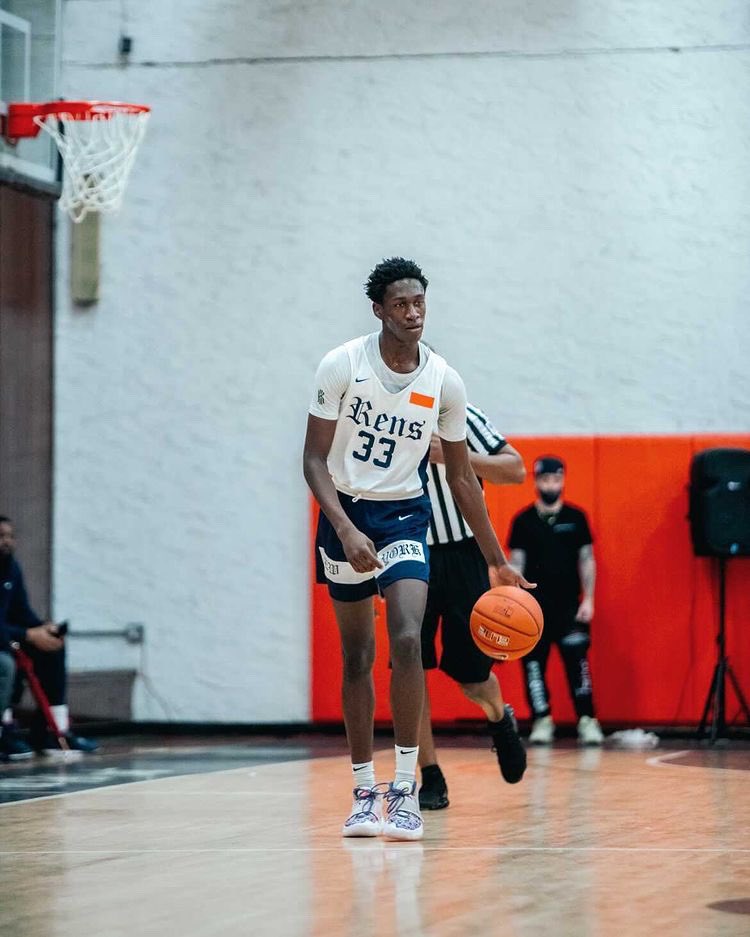 By JACOB POLACHECK When Scotty Middleton steps on the basketball court, he enters a different mode. “I’ll do whatever it takes to win at any cost,” he said. “It’s my competitive side. Some people take that as me being mad, but it’s really just my competitive side on the court.” The 6-foot-6, 180-pound forward out of Orangebury, SC, has a diverse skillset, scoring and facilitating on offense, while impacting the game on both ends of the floor. “I want to be a guy that influences everybody on the court and everybody around me to be better and to elevate their game to the highest level,” Middleton said. After spending his sophomore season at The Patrick (NJ) School, Middleton heads to Sunrise (KS) Christian Academy, a program looking to reload with another national championship contender squad after falling to Montverde (FL) Academy in the 2020 GEICO Nationals Championship Game. “Scotty brings life and energy to every room he is in,” Sunrise head coach Luke Barnwell said. “We will be able to use Scotty in a variety of ways because he is skilled and has great feel for the game scotty is a willing passer and will be key for us on the defensive end of the floor.” Set to play alongside five-star forward Mark Mitchell, four-star Kansas commit Gradey Dick, uncommitted 2022 forward Bobi Klintman and uncommitted 2023 guard Layden Blocker, Middleton will have the chance to put his versatility on display with a strong defensive mindset and hardworking attitude. “I try to work the hardest in every drill in practice, anything, conditioning,” he said. “No matter where you put me at, I want to win at any cost possible. That’s pretty much it.” With this mentality, Middleton has established himself as a prime 2023 target for many schools. Playing with the New York Rens on the Nike EYBL Circuit this summer, Middleton stepped into a leadership role, locking in everyday to ensure his team kept a positive attitude. “I feel like we had to get in a rhythm with each other because we hadn’t really played with each other in that environment yet,” he said. “An environment where everybody wants to win and nobody wants to lose.” Ranked by ESPN.com as the No. 53 overall prospect in the nation, Middleton is being recruited heavily by Ohio State, DePaul, Texas Tech, Arizona State, Kansas State, Oklahoma State and Penn State. He broke down each school: Ohio State: “I watched a lot of them last year because Roddy Gayle, from the Rens 17U team is committed there and he goes to Wasatch. When he came over, we watched a lot of their games. I actually like how they play. I think they’re going to talk to me and see how I would fit into their system. We’re going to get on a Zoom call soon so I can their defense, how they play and their offense.” DePaul: “DePaul is really good. I watched a lot of them last year. That was actually my first time watching them. They played Providence and I could feel the energy through the screen, their energy on the bench, their energy during the game, their enthusiasm, the coaches and all of that.” Texas Tech: “It was their defense that really appealed to me when I watched them play. When they play in their arena, it’s just a different energy. I could feel the energy in there. Everybody plays hard, defensively, offensively. They get a lot of buckets.” Kansas State: “Last year, it was a really young team. I watched them a little bit. I think they fought though. Even though they were young, one of the youngest teams, they fought. They could’ve given in, but they didn’t. With some older guys, I think they’ll be really good this year.” Oklahoma State: “I watched them a lot last year because of Cade Cunningham. I like his game so I watched them a lot. They just fought and everybody bought in. I feel like they knew Cade Cunningham was this star player and everybody bought into their role on the team. I feel like everybody really bought into what the coaches were saying and that’s why they were so successful last year.” Arizona State: “I watched them maybe four times last year. I feel like with them it’s just energy with them. Everything is fun. Everything is smiles, fun. You see everybody happy for each other. That’s what it needs to be like. They’re really happy for each other on and off the court.” Penn State: ” I didn’t get the chance to really watch them last year, but they talk to me a lot. I hear from the coaches a lot and I feel like that’s a big part of me wanting to talk to them even more. They check on me. They talk to me. They send me messages about any little thing to keep in touch with me. I feel like that’s really good with them.” Still a couple years away from college, Middleton is looking for a school that feels like a second home, with great teammates and coaches. “I want to go to the school that fits me best, on and off the court,” he said. “A school that emphasizes defense a lot because those are the teams that win the most, the better defensive teams. “I want to go to a school with enthusiasm in everything they do, on and off the court. I want to go to a school where everybody is happy with each other, nobody is mad. I just really love when everybody is happy for each other.” Follow Jacob Polacheck on Twitter Follow Adam Zagoria on Twitter Follow ZAGSBLOGHoops on Instagram And Like ZAGS on Facebook