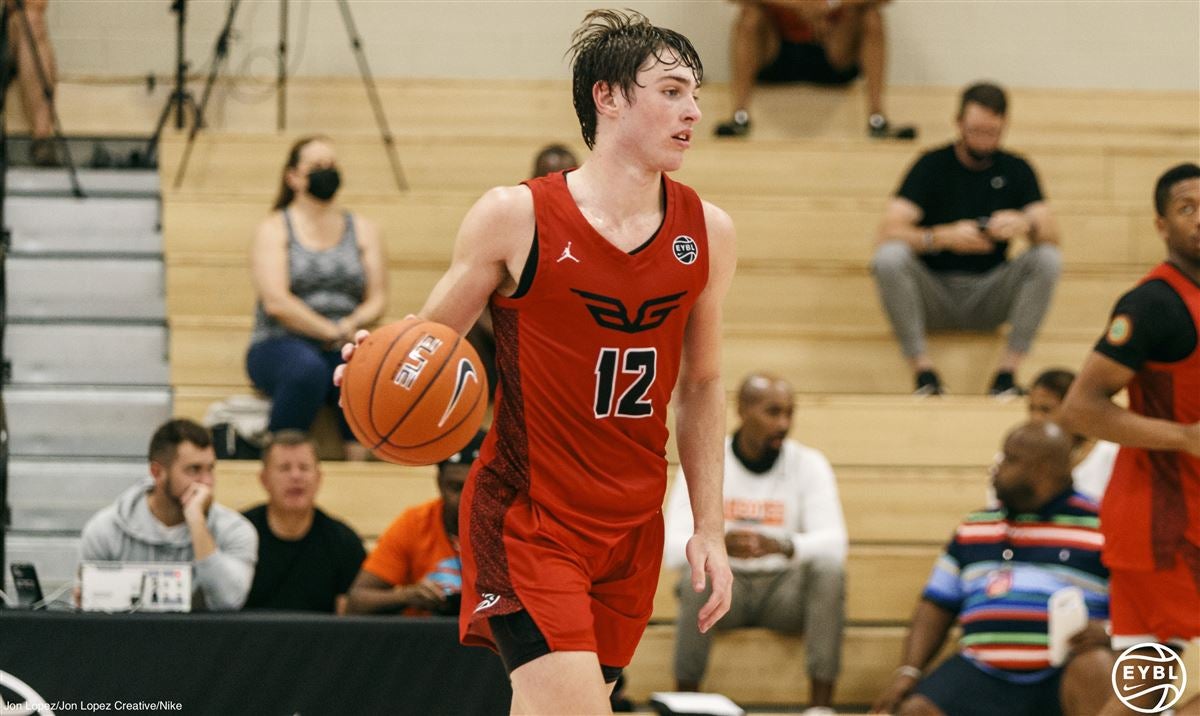 By JACOB POLACHECK Brendan Hausen saw his name enter the national spotlight this summer with a strong performance on the Nike EYBL Circuit. Now, with the summer behind him, Hausen is ready to embark on the final chapter of his college recruitment. Hausen, the 6-foot-4, 180-pound shooting guard from Amarillo (TX) and the Team Griffin AAU Program, is set to take official visits to Villanova, Oregon, Oklahoma, Arizona State and Texas Tech. “This is something I’ve always dreamed of,” he said. “I’m so thankful for all these coaches that have believed in me and seen my hard work pay off. I just think that it’s a dream come true. I’m so grateful for this opportunity.” Hausen will trip to Villanova from Sept. 15-17, before visiting Oregon (Sept. 25-27), Oklahoma (Sept. 30-Oct. 2) and Texas Tech (Oct. 9). He is also planning a visit to Arizona State and an in-home visit with Nevada on September 9. He broke down each school: Villanova: “Just the history there at Villanova. Coach (Jay) Wright really gets those guys to buy in day in and day out. Just the team atmosphere that they have there and their willingness to be selfless and really just do it for each other. That really sticks out to me. And just the coaches, they seem like they’re all one there, no one seems like they’re better than anyone else. So just the opportunity to go there and see that is going to be really neat.  Oregon: “Coach (Dana) Altman played and he was like me, a guy about my size. I think that he could really coach me, throw me in his system and use me. I like Dior Johnson at the one and then Kel’el Ware at the five. That could be a power group that we bring in if I decide to go there. Dior is just an ultra-competitor. He loves to win and play hard. He’s a pass-first point guard. Then, you’ve got a dynamic big that can run, catch lobs, set screens and I just think that could be something neat we do. I like what they’ve got going up there.” Oklahoma: “Coach (Porter) Moser, what he did at Loyola-Chicago with the guys that he had, he really turned that program around. He talks to me about me being the guy that he needs for his program, that he wants for his program and he’s recruiting me to be a captain. He always tells me that he wants me to leave a legacy at OU and that I’m his guy. He thinks I could come in and have heavy minutes as a freshman with how well I shoot the ball and can space the court. He just thinks there’s a great spot for me in his system.” Texas Tech: “Coach (Mark) Adams, taking over first year. Obviously, he’s been there for a while, but I like what I’ve seen so far. They get in there, they get after it, they compete every possession and it looks a lot like what they do at my high school defensively. They get after each other every day and he talks about how I’m their No. 1 guy. Being from West Texas, obviously that would be something neat. The fit there, I could come in and really stretch the floor for them, shoot the ball, be a facilitator and he thinks that I could get things going there and get things rolling in West Texas.” Arizona State: “Coach (Bobby) Hurley, being one of the great point guards and seeing his team, how they play. They have a fun style of play and they really shoot the ball with high-volume shooters and high-IQ guys that can really play the game. They talk about me really being a guy that can come in and really make an impact early. They think that I fit in well with what they’re trying to accomplish. They think that I could come in there and they could really use me.” Nevada: “They’re definitely up there too. I took my first official visit ever out there. Coach (Steve) Alford has played at the highest level. Coach (Cullen) Neal has been in the NBA as well. They just talk about me being the same size as them, they’ve been there, done that, and they think I could come there, be their guy, fit their system and help Nevada start something big up there. They think they can get me to the NBA one day and I could leave a legacy there.” Hausen says he’s still eying a commitment for late-September or early-October, but it could be later. “We’re still looking to find that perfect time,” he said. When it comes to that decision, Hausen says he wants to find a place he can call home. “I want to go somewhere that really gets to know me, really gets to know my family, somewhere that’s really invested in me, going to hold me accountable every day, on and off the court, that’s going to push me to be the best,” he said. “I want to go somewhere that we can win. I want to make the tournament and I want to have a team that’s all one, where no one is bigger than one another. I want to go somewhere like that where we could have a chance to make a deep run.” Ranked by 247Sports.com as the No. 25 shooting guard in the class of 2022, Hausen watches film on players like Luka Dončić, Tyler Herro and J.J. Redick. “I’m a high-volume shooter, but I’m a very underrated passer and I like to get my teammates involved,” he said. “I have a high-IQ. I’m not the fastest, the strongest or the biggest, but what I lack there, I make up for with my IQ and my skill.” Photo: Jon Lopez/Nike Follow Jacob Polacheck on Twitter Follow Adam Zagoria on Twitter Follow ZAGSBLOGHoops on Instagram And Like ZAGS on Facebook

Class of '22 forward Ven-Allen Lubin down to 7 schools