Syracuse offers D.J. Wagner, No. 1 in 2023, along with several other prospects | Zagsblog
Follow @adamzagoria

Syracuse offers D.J. Wagner, No. 1 in 2023, along with several other prospects 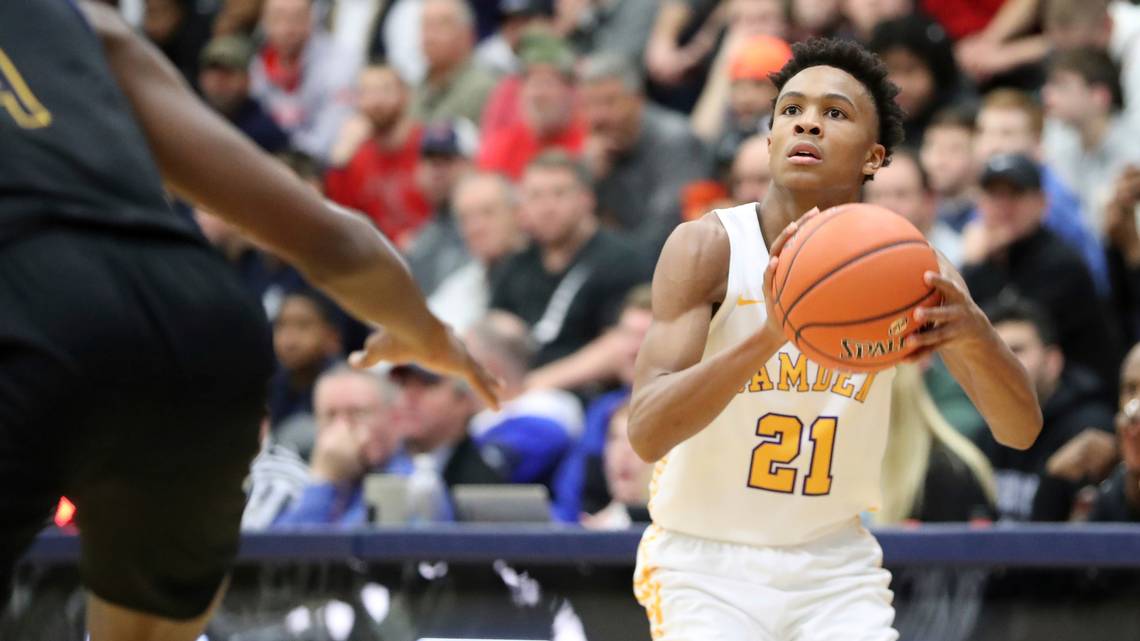 By ADAM ZAGORIA Syracuse head coach Jim Boeheim and his staff have offered scholarships to D.J. Wagner, the No. 1 prospect in the Class of 2023 out of Camden (NJ) High School and the NJ Scholars Elite program, and several other young prospects who attended the school’s Elite Camp. In the 2023 class, Syracuse also offered Papa Kante, a 6-foot-10 forward from South Kent (Conn.) Prep; Reid Ducharme, a 6-6 shooting guard at Brewster Academy in Wolfeboro, N.H.; and Joseph Estrella, a 6-8 forward from South Portland (Maine) High School, as reported by Mike Waters. In the 2024 class, the Orange offered Donnie Freeman, a 6-9 forward at St. John’s College High School in Washington, D.C. Boeheim, who turns 77 in November, would be 79 when the season begins in 2023-24 and 80 in the 24-25 season. He recently told me for Forbes SportsMoney that he can imagine coaching to 80 or beyond. Wagner, a 6-foot-3 point guard who is the son of Camden legend Dajuan Wagner and the grandson of former Louisville star Milt Wagner, is the No. 1 player in the Class of 2023. He has been linked to Kentucky and Villanova, but said earlier this summer he’s open to all schools recruiting him. “I am open to every school and really enjoying the process,” Wagner told ZAGSBLOG in June. “I’m not focused on committing right now. I’m focused on high school right now.” Dajuan Wagner starred at Camden and played one season for current Kentucky coach John Calipari at Memphis before being selected No. 6 in the 2002 NBA Draft. Kareem Watkins, Wagner’s brother, also plays for Kentucky. “Kentucky’s a great school and I love Kentucky,” D.J. said. “Really I just love watching college basketball and I just love college basketball.” Villanova coaches Jay Wright and Mike Nardi have also been a constant presence at Wagner’s games this summer D.J. averaged 22.0 points, 3.8 rebounds, 3.8 assists and 2.0 steals per game for the Panthers this past season on his way to being named 2020-21 N.J. Gatorade Player of the Year. “At the end of the day, we don’t care what he’s ranked,” said Camden coach Rick Brunson, a longtime NBA veteran. “We’re trying to get him to play at the highest level, so every day we’re pushing him. He loves to play, loves to work, so he’s an easy one.” Brunson said D.J. is “similar to his dad but he plays off his jump shot. He can really shoot it deep range, not that his father couldn’t. But his father’ s strong, would run you over. D.J.’s still young, he hasn’t gotten that strength yet, but he will.” He added: “I see him as a basketball player. He’s a guy that can score, if you double him he can pass. He’s not a traditional point guard who can come down and run your offense. He’s a scoring point guard, but he can make the right play.” Follow Adam Zagoria on Twitter Follow ZAGSBLOGHoops on Instagram And Like ZAGS on Facebook

Class of '22 forward Jarace Walker down to 7 options