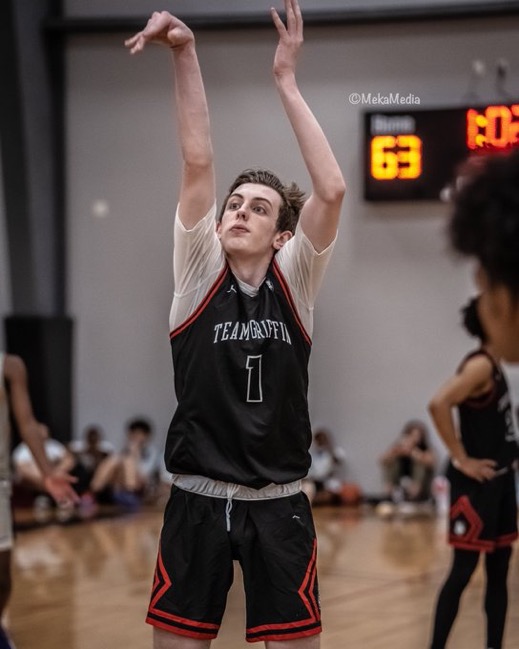 By TOBIAS BASS Drew Steffe, the No. 10 shooting guard in the class of 2023, is planning visits to Oregon State, Colorado, Butler and Oklahoma State, he tells ZAGSBLOG. The 6-foot-5 guard from Memorial (TX) and the Team Griffin AAU Program, is also hearing from Minnesota, Villanova, San Diego State, Northwestern, USC, St. Mary’s, TCU, Georgia Tech and Saint Louis. “Some qualities I’m looking for in both a program and coach are them pushing me to the next level as well as always being real with me no matter the situation,” Steffe said. “As well always having my back no matter what.” Steffe put on a shooting display this summer, breaking out at Nike Peach Jam, shooting 48 percent from the field and 41 percent from beyond the arc. “I was able to show them my shooting ability and how I can space the floor,” Steffe said. “Also, how I can create off the dribble and handle the ball at a really high level.” Steffe was also impressive on the defensive end, showing off his on-ball and off-ball defensive skills, leading Team Griffin to an 8-4 record, averaging 13 points and 5 assists per game. “The EYBL was a long experiment that was a lot of fun,” he said. “I love high level games so playing in one of those everyday was amazing. Me and my teammates got a lot closer on and off the court and we built some really strong relationships with each other. Individually I think I had a good showing to the coaches of what I bring to the table and what type of player I am.” His father, Matt, a former Division 1 assistant at Quincy University (1998-99) and Portland State (1999-2001) has been a crucial part of Steffe’s development, working on and off the court. “He gives so much great advice day in and day out which helps me a ton and I wouldn’t know what’s what without him,” Drew said. “As well he is always putting me in the right situations to further my basketball game.” Follow Tobias Bass on Twitter Follow Adam Zagoria on Twitter Follow ZAGSBLOGHoops on Instagram And Like ZAGS on Facebook