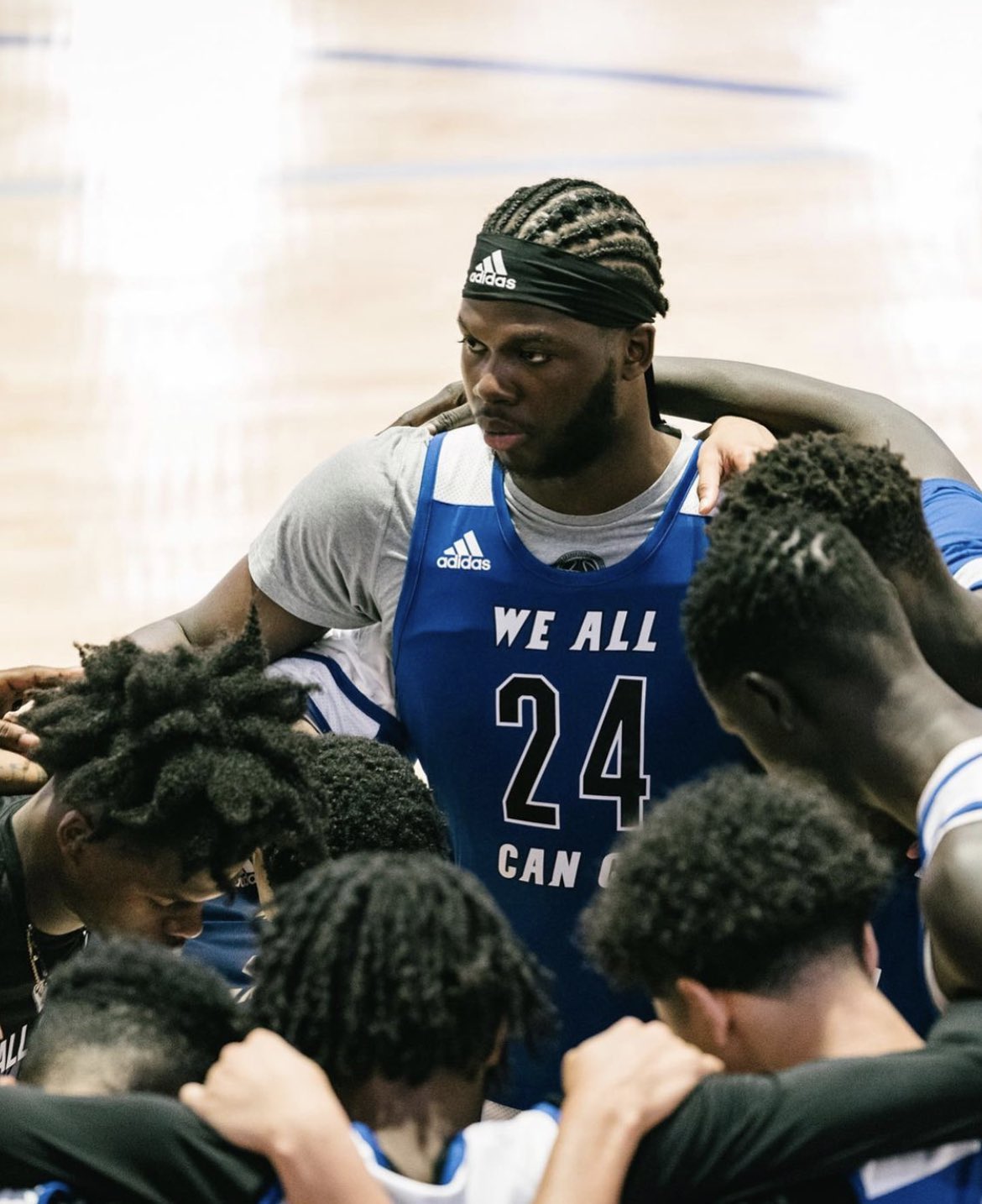 By JACOB POLACHECK Following a slew of five-star commitments over the past two weeks, Chris Livingston, the No. 1-ranked forward in the class of 2022 and perhaps the nation’s top uncommitted prospect, will soon join them. Set to commit on his birthday, Oct. 15, Livingston is still unsure of his future route, with three visits already under his belt and two more on the way. A couple months after his first two official visits to Kansas and Kentucky, Livingston traveled to Georgetown on July 31 for his third visit, spending time with former New York Knicks legend and current Hoyas head coach Patrick Ewing. “They’re really down to earth people that you feel you can relate to,” Livingston said in an interview with ZAGSBLOG Monday evening. “I love Patrick Ewing, what he’s done for the game and how he gives back, being the Hall-of-Famer that he is. That was a good visit.” Livingston was particularly interested in Georgetown’s potential to help him max out his potential and become a future NBA great. “They were just talking about how they can really get me to where I want to be,” he said. “They really believe in me and they’re really nice people. Having a head coach like Patrick Ewing – he’s been where I want to be in life and he can really help me a lot.” While on his trip, Livingston and the staff also discussed the NCAA’s name, image and likeness opportunities, something that “Being out in Washington, D.C. with all those corporations and businesses out there, that could really help you along the way,” he said. “There’s a lot of things that came to mind that they brought to my attention – their play style and things like that. I think it’s real good.” And with the Overtime Elite league still on his list of options, Livingston says that NIL has certainly impacted his decision-making process. “It’s something I’m definitely still considering, but I feel like (NIL) definitely leveled the playing field as far as college, G League, pro, overseas, etc,” he said. “I’ll still be considering all options.” Joining Chris on visits to both Kentucky and Georgetown was his twin brother, Cordell, a three-star guard in his own right. The twins will travel together again later this month when they trip to Tennessee State for an official visit from August 20-22. “We’ve been thinking about (playing together in college),” Chris said. “We do have a couple offers to the same schools and we talked about it.” Yet, despite their mutual visits, it’s far from a give-in that we will see the twins suit up together at the next level. “I don’t think it’s going to play a big, big role in where he goes and where I go,” Chris said. “I think we’re going to pretty much do our own thing. If we align with our likings of both schools, then it’s going to work out how it works out.” Chris’ June 11-13 trip to Kansas was the only visit in which Cordell was not in attendance. Meanwhile, Cordell is planning a visit to Detroit-Mercy, a school not on Chris’ list. And when it comes to making that final decision, Livingston says it will be the same formula the rest of the way through. “Just the basketball culture, how the campus looks, the atmosphere, how invested and driven the coaching staff is with what they’re trying to do up there,” he said. “It’s all the main categories in the previous visits.” Whichever program receives a commitment from the 6-foot-6 forward will be getting one of the nation’s most-heralded prospects. And with Jalen Duren and Emoni Bates graduating early and joining the class of 2021, Livingston has risen to the No. 3 overall position in ESPN’s Class of 2022 rankings. Ranked behind only UCLA commit Amari Bailey and Baylor commit Keyonte George, Livingston has the No. 1 spot in his sights. “I feel as though it’s more motivation,” he said. “I’m able to get No. 1 by finishing great through this school season. I’m coming for that.” In order to claim his position as the nation’s top high school basketball prospect, Livingston will need to defend at an elite level while improving his rebounding numbers in his senior season at Akron Buchtel (OH) High School. “I feel as though I have a high enough motor and with my vertical athleticism, I can out-rebound everybody,” he said. “If I take pride in being the best defender on the floor, I think I’ll be straight.” Yet, despite his unparalleled skillset, Livingston says he’s no longer hearing from many of the schools in his Top 11 list released in June, including Alabama, Florida, North Carolina and Ohio State. “They haven’t been reaching out or talking to me so I don’t really know what’s up with that,” he said. Even Memphis, a school that Livingston plans on touring for his fifth and final official visit in September, hasn’t remained in consistent contact. “I haven’t heard a lot from them, but we have something scheduled,” he said. And after originally targeting a decision for early 2022, Livingston says he’s rethinking a commitment timetable. “College coaches have brought to my attention the importance of making a decision sooner,” he said. “I might speed up the process, but I don’t know yet.” This story has been updated. Follow Jacob Polacheck on Twitter Follow Adam Zagoria on Twitter Follow ZAGSBLOGHoops on Instagram And Like ZAGS on Facebook