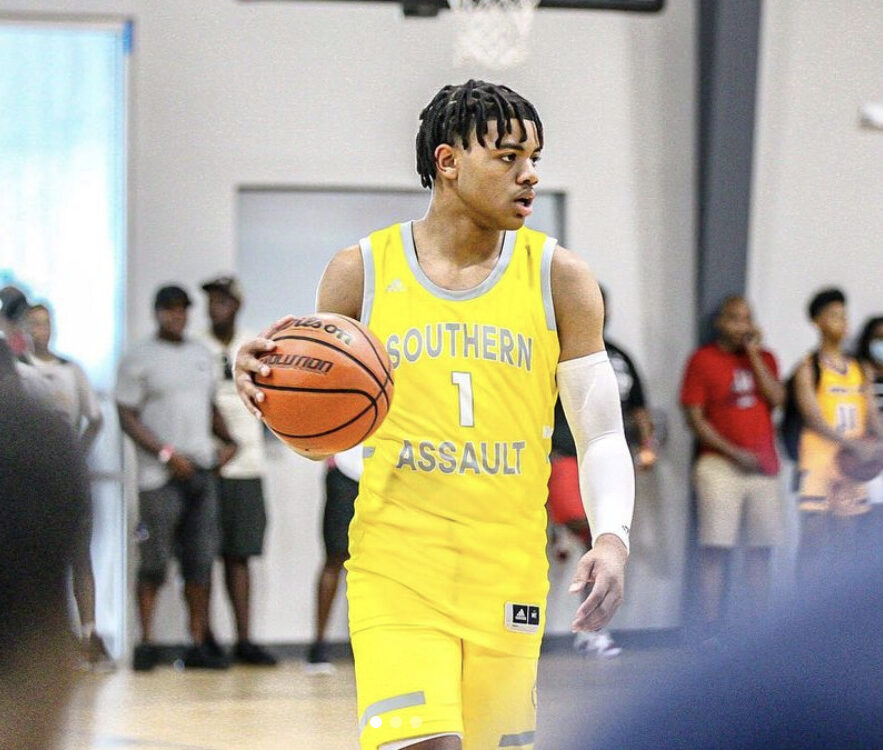 By ADAM ZAGORIA Keyonte George, the No. 1-ranked shooting guard in the Class of 2022, is staying in his home state of Texas for college. The 6-foot-4, 185-pound shooting guard out of iSchool Entrepreneurial Academy in Lewisville, TX, committed to Baylor on Sunday, choosing the reigning NCAA champion Bears over Kentucky, Kansas, Oklahoma State, and Texas. “It just feels like a family environment,” George, who has drawn comparisons to Brad Beal and D’Angelo Russell, told ZAGSBLOG before his public announcement. “The system they run, it’s pro-like so it lets me be me, let’s me be Keyonte. And the atmosphere around there, they show love. All the coaching staff, they all care about their players on and off the court so that was really the main factor in choosing my school.” With the reclassifications of Jalen Duren and Emoni Bates, George is now ranked the No. 2 overall prospect in 2022 behind UCLA commit Amari Bailey, per ESPN.com. After handing unbeaten Gonzaga its first loss of the season in the NCAA championship game, Baylor guards Davion Mitchell and Jared Butler were chosen in the NBA Draft. Mitchell was chosen No. 9 overall in the first round by the Sacramento Kings, while Butler was selected No. 40 overall in the second round by the New Orleans Pelicans, and was then dealt to the Utah Jazz. George now joins point guard Dillon Hunter in coach Scott Drew’s 2022 class. “I’m a three-level scorer,” George said. “I can get after in college and get stops and make my teammates better overall and just be a winner.” Texas was also heavily in the hunt for George and landed his high school teammate, point guard Arterio Morris, last month. Now Chris Beard and his staff are focusing on Pro Skills and Richardson (TX) shooting guard Cason Wallace, while Kentucky and Kansas are among those in the mix for Arkansas shooting guard Nick Smith Jr. George said he did consider the NBA G League option, but wanted to go to college instead. “It wasn’t my focus at all in this process,” he said. “I feel like college, you can build your brand more, get your name out there. And my dream was to play in the NCAA Tournament, so just being able to do that was one of the main factors, too. With the NIL stuff, you can build your brand more. In the G League, sometimes they forget about dudes. If you go to college, you get to play on ESPN a lot. So the main factor was building my brand, not really in a rush to get to the next level. Just take the process slow and become the best version of me.” Follow Adam Zagoria on Twitter Follow ZAGSBLOGHoops on Instagram And Like ZAGS on Facebook