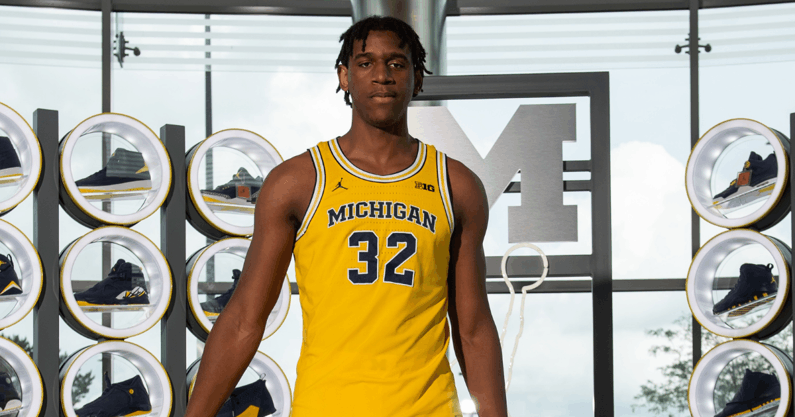 By ADAM ZAGORIA Tarris Reed, the 6-foot-10 big man from Link Year Academy and MoKan Elite AAU, committed to Michigan Wednesday, he told on3.com. Ranked the No. 14 center in the Class of 2022 by 247Sports.com, he also considered Ohio State, Michigan State and Purdue, and told the site he initially planned to commit to Ohio State. “Playing under coach (Juwan) Howard will help me get to that level that I want to go, the NBA,” Reed told the site. “I just want to see my development in the future, and see how good I can become. I don’t really know how good I can be. So I’m just going to keep my head down and keep working. And trust that coach is going to get me there.” Michigan won the Big Ten title last season and reached the Elite Eight of the NCAA Tournament.

“I’m ready to be coached by him — a coach that played my position and that’s been to the NBA,” Reed said. “I can’t wait.” The Saint Louis native has drawn comparisons to Joel Embiid. “I get many comparisons to Joel Embiid,” he told ZAGSBLOG earlier. “Skilled big man that’s can score on all 3 levels. We have a strong feel for the post whether its facing up or back to the basket as well as being a threat on the perimeter.” He joins point guard Dug McDaniel in Michigan’s 2022 class. Follow Adam Zagoria on Twitter Follow ZAGSBLOGHoops on Instagram And Like ZAGS on Facebook