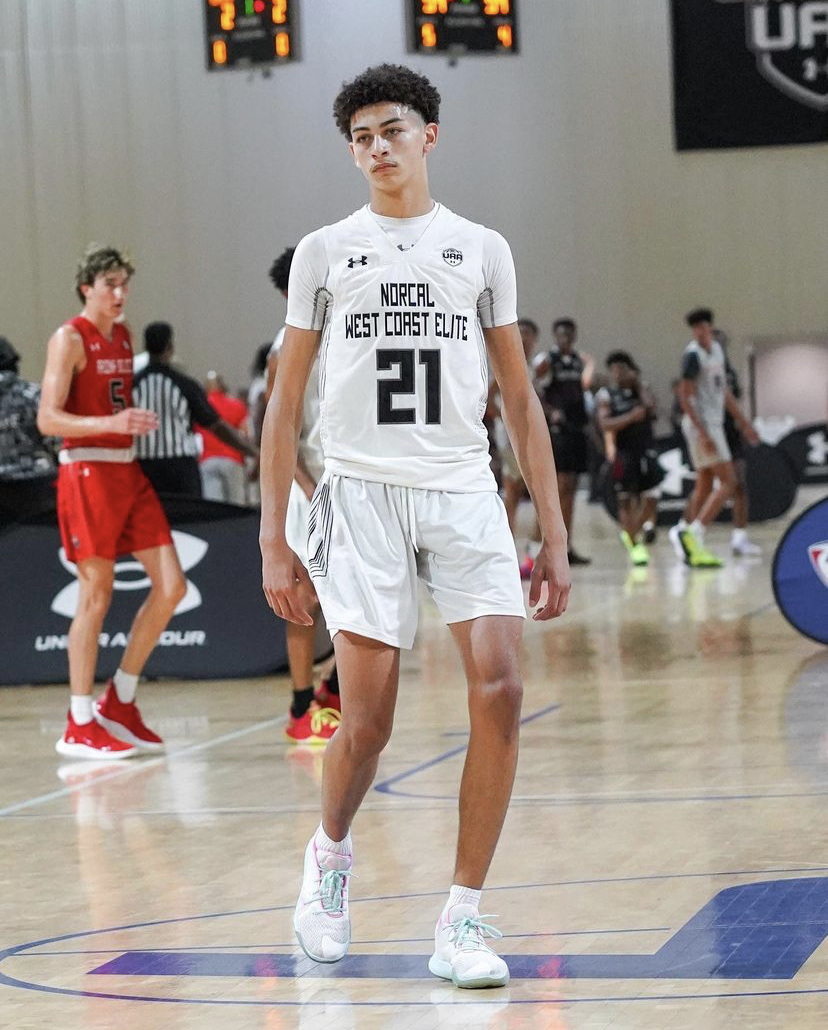 By TOBIAS BASS One year ago, class of 2022 shooting guard Miles Byrd didn’t hold a scholarship offer, but after countless hours in the gym, he’s emerged as one of the hottest recruits on the west coast. The 6-foot-7, 170 pound shooting guard from Stockton (CA) and the West Coast Elite AAU Program, has turned heads this summer with a stunning ability to score on all three-levels. “I think over the summer, coaches were able to evaluate me and see that I’m a competitor and a team guy,” Byrd said. “I’m a very willing passer who can knock down the jumper and as defend at a very high level. “Involving my teammates is one of my strong suits of my game. I believe my passing ability is the strongest part of my game and just instincts, knowing where my guys are and getting them open shots.” The four-star shooting guard is planning a visit to San Diego State this fall as high-majors start calling. After taking unofficial visits to UC Davis and USF in June, Byrd is eying a visit to San Diego State in early September. “My early visits were really intriguing and I’m excited for my upcoming one in the near future,” he said.  This summer, Byrd has heard from the likes of Villanova, Marquette, Creighton, Oklahoma, Butler, Saint Mary’s, USF, Gonzaga and Boise State, among others. He broke down each school: San Diego State: “San Diego State and I started communicating in later June and I like the staff a lot. San Diego isn’t too far from home and they have a winning culture.” Washington: “Coach (Mike) Hopkins is a great coach, a great dude. Him and I have been communicating a lot recently. Playing at a high level like the Pac 12 is something I’m taking into strong consideration.” Minnesota: “I have a great relationship with multiple coaches at Minnesota. They are pushing really hard for me, which I value. I did virtual tours online with my dad and their facilities. The area where campus is, it’s beautiful.” Colorado State: “Colorado State is another school where I have a good relationship with the coaching staff and I value how invested they are in me. There’s constant communication and dialogue between me and the staff.” Pacific: “Pacific has been like a second home to me for the majority of my life. I was born in Stockton and moved back here when my dad took the assistant job in 2010. Stockton is for sure home and I’m very familiar with the school.” Santa Clara: “Santa Clara is beautiful. So far, it’s the only school I’ve visited officially and I loved the campus. I love the staff as well. Head coach Herb Sendek and I have a great relationship that we have built over time.” Miles Byrd’s father Calvin Byrd played at Villanova 1989 to 1993. Miles talked about his relationship with his father and the advice he gives him. “My dad is my role model for sure,” he said. “Him and I have a great relationship where the truth is something that is always told no matter what. His biggest advice throughout summer was just keep working, keep my head down, and stay humble.” With a number of elite recruits set to make their commitment in the coming weeks, Byrd says he’s looking for a school to develop him to a professional basketball player. “The biggest part of my decision will come down to development,” he said. “I want to go to a school where I know I’m going to get better in all aspects of my game because my ultimate goal/objective is to play professional basketball and there is a lot of work I need to put in to get there.” Many AAU programs on the west coast didn’t have much time to practice due to California having to squeeze their high school seasons a few weeks before the live period. “We didn’t get many team practices in, which was hard, but we all like each other and respect each other as players,” he said. “That’s why I think we were able to compete at a high level. Everyone gave it their all and that’s all you can ask for as a teammate. I’m rocking with those guys and I’m pulling for their collegiate careers, wherever they end up.” Follow Tobias Bass on Twitter Follow Adam Zagoria on Twitter Follow ZAGSBLOGHoops on Instagram And Like ZAGS on Facebook