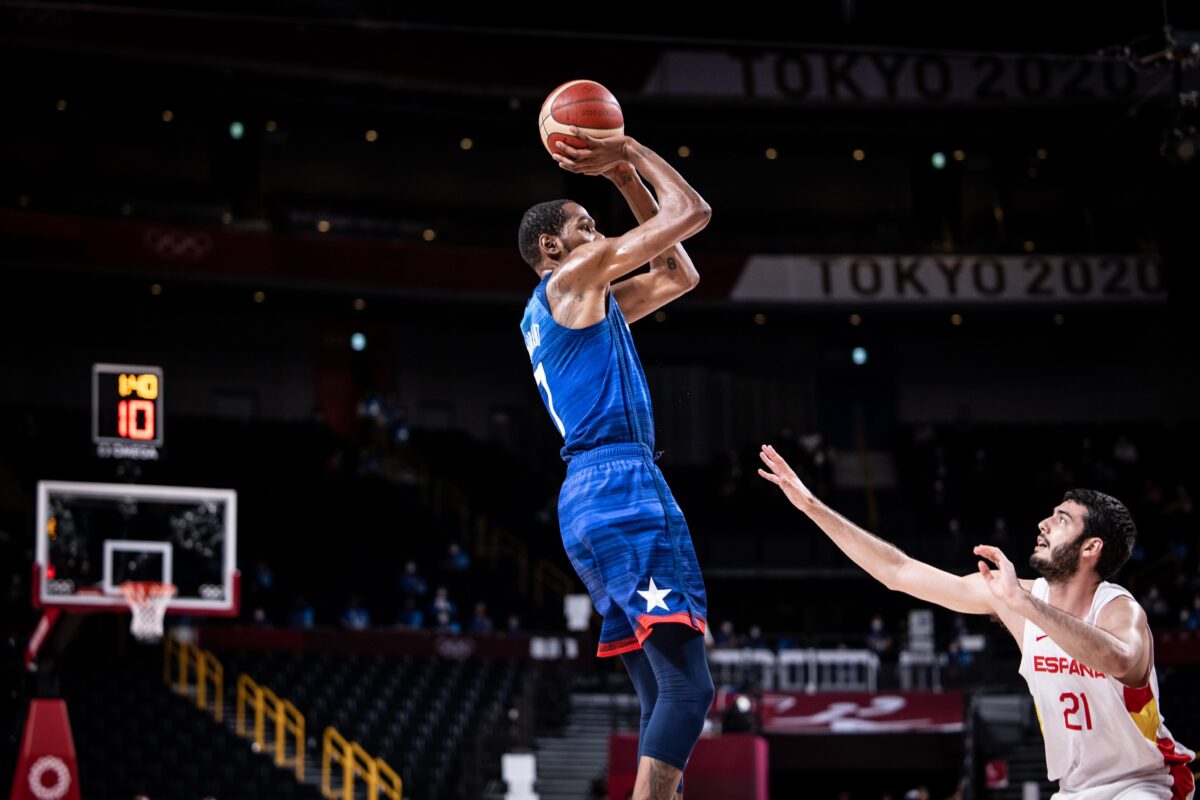 It was a battle of basketball titans, playing on the biggest of international stages. And during the first half of Tuesday’s semifinal at the Olympic Games Tokyo 2020, the U.S. Olympic Men’s Basketball Team (3-1) and Spain (2-2) danced with each other, felt each other out and landed significant blows each way. But in the third quarter it was the top-ranked Americans who quickly landed the haymaker. There was no standing eight count, but the second-ranked Spaniards were staggered. By hitting five 3-pointers and not allowing Spain to make a field goal for almost six minutes to begin the second half, the U.S. advanced to the Olympic semifinals with a 95-81 victory on Tuesday at Saitama Super Arena. The U.S., three-time defending gold medalist and winner of 15 golds in 18 trips to the Olympics leading up to Tokyo, will face Australia in Thursday’s semifinals (12:15 a.m. ET, Peacock). The U.S. is 8-0 against Australia and 7-1 vs. Argentina in Olympic play, but Australia beat the U.S. last month in an exhibition in Las Vegas. Kevin Durant scored 13 of his 29 points in the third quarter, hitting two early 3-pointers to open the second half, and he lead five Americans in double figures. Jayson Tatum had 10 of his 13 points in the fourth quarter to help put Spain away, while Jrue Holiday added 12 points, Damian Lillard 11 and Zach LaVine 10 points. The Americans improved to 13-0 versus Spain in Olympic action. “The game is about buckets,” Durant said. “When you see the ball go in the rim, everybody’s got more energy — coaches, players, trainers, everybody. We started making shots, made some 3s, and guys calmed down and made some stops.” Ricky Rubio dazzled for Spain, scoring 38 points for the 2019 FIBA World Cup champions and the team the U.S. has beaten in two of the past three Olympic gold-medal games. Sergio Rodriguez added 16 points, and Willy Hernangomez 10 points and 10 rebounds for Spain. “I didn’t expect anything less,” said Holiday, a premier defender often tasked with trying to slow Rubio down. “Ever since he (Ricky) was, what, like 12, he’s been doing this. So for him to come out here and just display the type of talent that he has is really cool to be a part of and to see.” For part of the second quarter, it looked like Rubio and Spain — which featured two five-time Olympians — might have the right formula to take down the Americans, who have repeatedly started slow in these Olympics. Seven straight U.S. misses sparked a 10-0 Spain run that made it 39-29 with 3:25 left in the half. But Durant, a two-time gold medalist who passed Carmelo Anthony to become the top American scorer in men’s Olympic history on Sunday, triggered a 14-4 run to close the half and tie the game 43-43. The U.S. was just 4-for-17 from 3-point range in the first half. “They played with extreme energy to start the game, and we were a little sluggish,” Durant said. “We didn’t shoot the ball well, and that kind of affected our defense a bit. But we got into it at the end of the second quarter and were able to get stops, get some scores and battle and try to get some momentum. In that third quarter, we knew exactly what we needed to do.” And that was landing a decisive blow. Durant hit a pair of quick 3-pointers and the Americans connected on five of their first six shots from deep in the third period. Meanwhile, the U.S. defense kept Spain from a field goal for the opening 5:44 of the half. The result was a 22-6 run that turned a tied game into a 65-49 U.S. advantage. Combined with the closing run of the first half, it was a 36-10 burst to take control. Following a rare Olympic loss to France (3-0) to begin the tournament, the U.S. has steadily looked better and better in its last three games. The team might be finding the right elements needed to create chemistry at just the right time for a sqaud that expects nothing less than gold. “I think the potential of this team is endless,” said U.S. forward Draymond Green, who had four points and two assists. “Unfortunately, we (only) got two games left. So, we need to make sure that we’re continuing to get better each and every time we step on the floor, and I think that’s why we’ve done it.” Photo/ Release via USA Basketball Follow Adam Zagoria on Twitter Follow ZAGSBLOGHoops on Instagram And Like ZAGS on Facebook