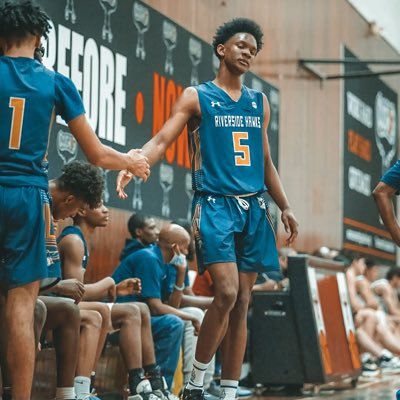 By ZACH SMART Having rapidly evolved as more of a hard-attacking guard, finishing through contact and in crafty, ambidextrous fashion while picking his spots well, 6-foot-5 Class of 2022 guard Noah Best has shed the label of shooter. While Best first made his name as a mismatch threat with spot up ability and a knack to trigger runs in the catch-and-stick game, the rising senior has added significant muscle to a once spindly frame, working through the arduous obstacles of Covid this past winter and fall. The consistent workload and innovative workouts, which included everything from pushups to cardio, have paid dividends. Northeastern, Fordham, George Mason, and Youngstown have now offered the Mount St. Michael guard, who has shown intriguing promise while playing for the Riverside Hawks on the AAU circuit. Fluid ball movement and a fleet of sharpshooters propelled Riverside to success during a recent tournament in Georgia. Best was quick to cite team selflessness and the patience for a good clean look and high percentage shot as critical factors. “Us as a team just moving the ball made us look good overall,” said the Bronx-bred Best, who also holds offers from Bryant, Columbia, Robert Morris, Stony Brook, Towson, Hofstra, Elon, St. Bonaventure, and several others. “It’s a really tough decision on who to decide,” Best explained. “So I’m taking my time with my decision. Recently, all the schools have been consistent. But I am hearing from George Mason and Robert Morris mostly right now.” With former Villanova assistant coach and local New York City product Kyle Neptune (who starred as an All State Player at Brooklyn Friends School and prolonged his career at Lehigh University) now at the helm at Fordham, the recruiting grind appears to be ramped up a few notches. The Rams recently signed a proven veteran in high scoring guard Antonio Daye, a transfer via Florida International who averaged a team-best 17.1 points and 4.1 assists at FIU as a junior. Daye, the bullish 6-foot-1, 190-pound guard turned in memorable performances with a 23-point (8-for-10 FG, 2-2 3FG) game en route to a 85-69 trouncing of FGCU. Daye’s innate killer instinct was visible during a 28-point performance (10-for-17 FG) as he willed the team to a win over Jacksonville State in Miami. Best could potentially evolve into a priority at Fordham and at several in-state programs as he assumes a leadership role as a seasoned senior at MSM. Follow Zach Smart on Twitter Follow Adam Zagoria on Twitter Follow ZAGSBLOGHoops on Instagram And Like ZAGS on Facebook