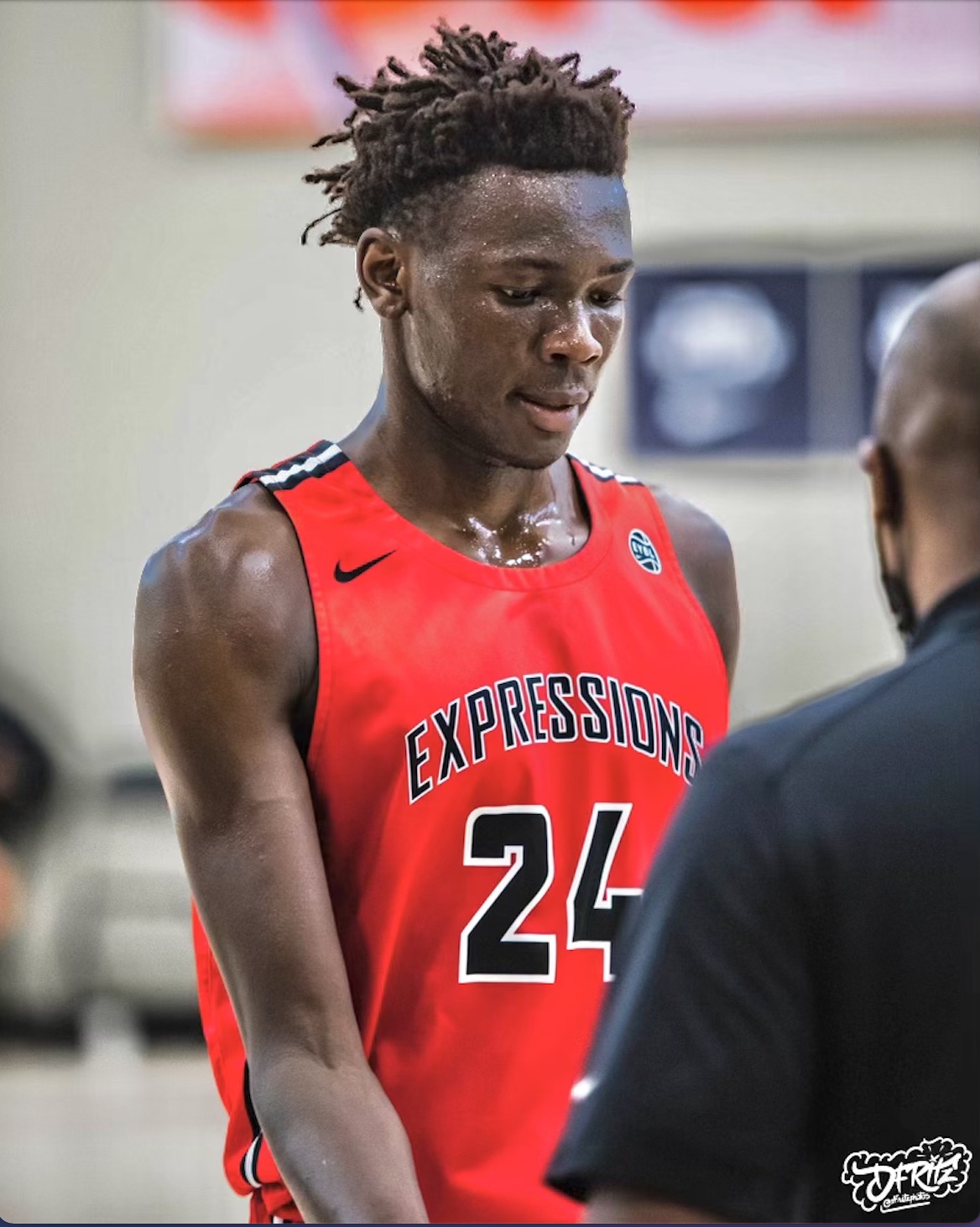 By JACOB POLACHECK Papa Kante, the 6-foot-10 power forward from South Kent (CT) School and the Expressions Elite AAU Program, will take an unofficial visit to Syracuse for an elite camp on Aug. 28, he tells ZAGSBLOG. “Coach (Adrian) Autry has been the point in my recruitment,” Kante said. “He’s easy to talk to and he’s very funny. He’s my guy. He was at almost all my games this past spring and summer.” The Class of 2023 prospect is originally from Senegal, but moved to the United States in October of 2019, where he started to play organized basketball for the first time. Yet, it wasn’t until this summer that Kante began to receive national attention, playing for Expressions Elite on the Nike EYBL Circuit and emerging as a breakout prospect at Peach Jam. “It was amazing, I can’t believe it,” he said. “Before I came here, I didn’t know a lot about Peach Jam, college or anything. When I stepped into the United States, I started to get serious about AAU and things like that. When I went to play in the EYBL and Peach Jam, it was a good experience because I got to play with a lot of good players.” Kante was one of the youngest players on the U-17 team, but held his own against older opponents. “It was very tough, but it was a good experience,” he said. “It was a tough game, we play a tough game, but I had fun too because I was playing with a team that helped me. It was a good experience for me and I’m looking forward to playing next year too.” His play at Peach Jam, including his adjustment to the style of play, impressed many in attendance, including Expressions Elite coach Ken Jackson. “Him playing up in U-17 as a 2023 and being one of the key contributors for a Peach Jam birth is huge,” Jackson said. “His upside is sky high. His jump shot, his motor, feel fit the game – he works very hard and I’m impressed by the way he’s able to adapt.” Although Syracuse is yet to offer, Kante currently holds offers from Siena, TCU, East Carolina, Georgia, Rutgers and Pitt, among others. “It’s a good experience,” he said of the recruiting process. “It shows me that I need to keep working. I’ve been to the gym a lot. I just want to go to the gym. It’s a good experience that makes me want to keep working hard and stay humble and be patient.” He broke down each school: Siena: “I’ve got an offer from Siena and talked to coach Carmen (Maciariello). He was the first head coach to offer me. He’s a really good guy who keeps it real.” TCU: “I got an offer from TCU and coach (Jamie) Dixon. That was the second head coach to offer me. He showed me film and after offered me.” East Carolina: “They offered me before Peach Jam, coach (George) Wright-Easy. He’s always sending me good text messages.” Georgia: “Coach (Wade) Mason was the first coach to reach out to me from Georgia on June 15. He’s stayed in contact. Afterwards coach John Linehan called after Peach Jam, saying coach (Tom) Crean really likes me and offered.” Rutgers: “Coach (Steve) Pikiell and coach (Karl) Hobbs called my coach in the spring after seeing me play. They offered me. They’re really good guys.” Pitt: “My third offer was coach Jeff Capel from Pitt. We talk all the time.” “I’ve got UMass and Bryant (offers) and some interest from high-majors like Washington,” he said. “Kansas, Washington, Tennessee, Arizona, Virginia, Miami, UConn, UCF, UConn, Marquette and Ohio State – I have a lot of interest from those schools.” Having only played organized basketball for two to three years, Kante understands that he needs to continue to work hard in order to achieve his goal of “I’m a hard worker. I’m humble and my parents, they told me to be grateful,” he said. “I can describe myself as being hard-working, humble, grateful and patient. Life is about patience. It’s not going to happen overnight, as they say.” Photo: DFritz Photos This story has been updated. Follow Jacob Polacheck on Twitter Follow Adam Zagoria on Twitter Follow ZAGSBLOGHoops on Instagram And Like ZAGS on Facebook