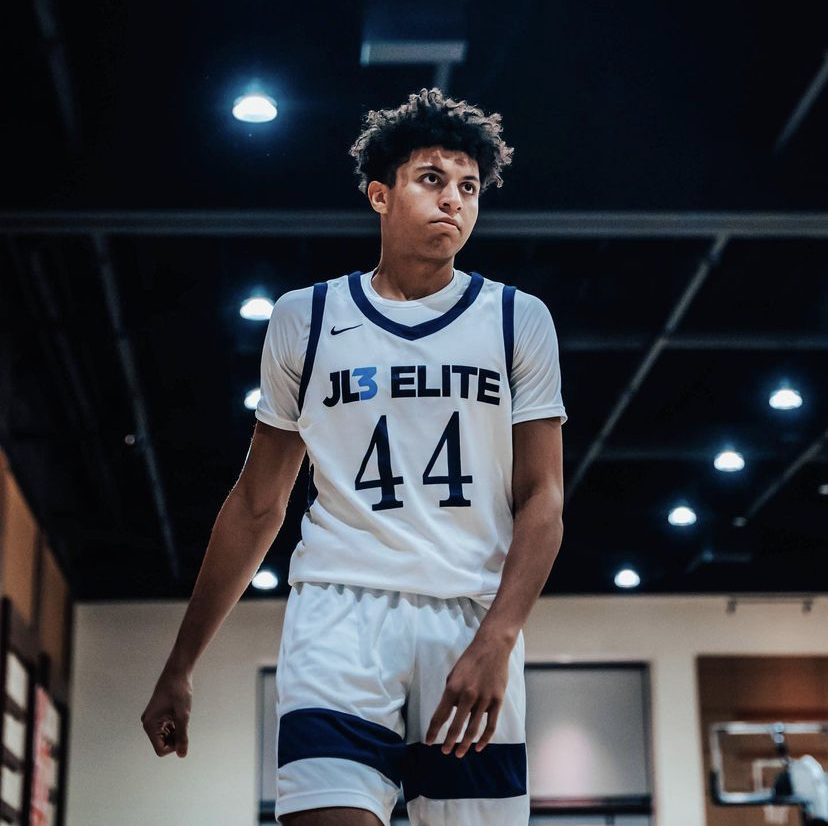 By TOBIAS BASS George Washington III, the No. 37 overall prospect in the class of 2023, has made a name for himself as one of the best shot makers in his class. The 6-foot-2, 170-pound guard from Christian Academy of Louisville (KY) and the JL3 Elite AAU Program, finished with multiple games during Peach Jam in which he scored more than 20 points, impressing several of the coaches in North Augusta, SC. “I think I was able to really showcase my leadership and being a great teammate,” Washington said. “As well as my shooting ability and effectiveness off the ball. During school ball, I’m mainly a point (guard).” Heading into August, Washington plans on raising the bar. “It’s really a blessing to have my game be recognized at such a high level,” he said. “I’ve been on the outside looking in on the rankings so I know the hunger of wanting to see your name on that list,” he said. “It’s great to see hard work pay off, I’m not content though and I’m ready to stay in the gym and keep moving my name up.” Ranked by ESPN.com as the No. 1 player in the state of Kentucky, Washington has taken unofficial visits to Louisville (June 1) and Ohio State (June 15). He is also being recruited by Cincinnati, Auburn, Western Kentucky, Florida State and Purdue, among others. He broke down each school: Ohio State: “They have a great campus. It was stunning and I feel a real close connection to the coaching staff. The campus and facilities were top notch. They are a top-level athletic program with a great staff that I connect really well with.” Louisville: “It was amazing. It was really impressive to see the level of detail that they put in their facilities and athletics, along with a great coaching staff. They have a basketball-first athletic program that I think is going to be a breeding ground for pros soon. The coaches are next level and know how to connect. They also have great adaptability when it comes to play-styles and really understand the game.” Cincinnati: “It was great. Everything on campus was so accessible, the coaches were amazing and I really clicked with them. They have great coaching staff that truly connects with the players. The mentality and feel of the ways things are done there is great.” Auburn: “I love how head coach Bruce Pearl is able to utilize guards like Sharife Cooper and how he’s able to produce pros for the next level.” Western Kentucky: “They produce dogs. They are a school in great position to rock the boat and become a big name program. I think Zion Harmon will showcase this year how much this staff can do.” Florida State: “It’s a great school that is a pro factory. They know what it takes and how to get their players there. I have a great relationship with assistant coach Charlton Young.” Purdue: “It’s a school that truly cares about its basketball. The coaches have shown a great flexibility when it comes to dealing with many of the guards that have come through the school.” Washington is also hearing from George Washington, Liberty, Memphis, Tulsa, Oklahoma St, Oral Roberts, Coastal Carolina, Virginia, UNLV, and Penn State. “I’m also planning on visiting pretty much every other school that I have talked to whenever I can,” he said. “Being able to see and interact with the coaches and campus in person is really big for me.” While in North Augusta, Washington III picked up two offers: Cincinnati and Western Kentucky. He credits his teammates for their success at the Peach Jam and says the pandemic helped him improve his game. “I think we played great,” he said. “We really came together at the right time and were playing our best basketball of the summer. We fell short due to a bad game at the wrong time, but it’s what happens. “I feel the break actually allowed to me to really get in the gym and grind to help push my game even further forward. “ The Peach Jam was a two-week process and was very stressful for some families, but the Louisville, Kentucky native enjoyed every minute of it. “It was more fun than I even thought it would be,” Washington said. “It was two weeks of straight basketball against the best and it was incredibly fun.” As Washington’s recruitment continues to to take off, he discussed what he’s looking for in a coaching staff. “I’m really just looking for a coach that is genuine and has a real enthusiasm and passion for the game,” he said. “Someone that sees my game and knows how to push me to the next level.” Follow Tobias Bass on Twitter Follow Adam Zagoria on Twitter Follow ZAGSBLOGHoops on Instagram And Like ZAGS on Facebook