Jahki Howard is a top-five player in the Class of 2024, but he isn't done climbing yet | Zagsblog
Follow @adamzagoria

Jahki Howard is a top-five player in the Class of 2024, but he isn’t done climbing yet 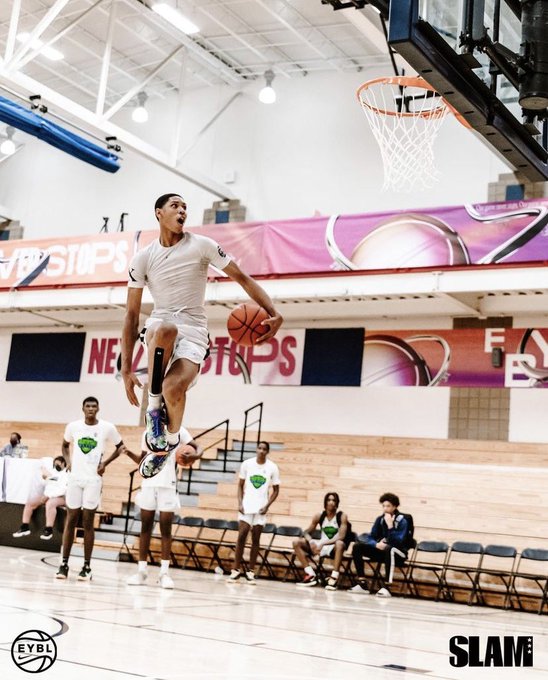 By JACOB POLACHECK It hasn’t been long since Jahki Howard fell back in love with the game of basketball.  Hailing from the east coast, Howard has spent most of his youth bouncing from Boston to Atlanta and back. It was his second stint back in Boston from the ages of 10-13 where Howard’s hoop dreams became reinvigorated, joining a rec league basketball team alongside his football buddies.  “I remember being very bad,” he said. “I couldn’t make a layup, couldn’t dribble the ball. It was just bad.”  However, Howard never let his early struggles cloud his goals of greatness.  Heading into the sixth grade, Howard sat down with his father, Abu Askia, and said that by the time he was in the ninth grade, he would be one of the top high school basketball prospects in the nation.   “The look in his eyes was so passionate and determined,” Askia said. “At that point I knew, there is going to be nothing that gets in this kid’s way from reaching his ultimate dream which is to  become a professional basketball player.”  Shortly thereafter, Howard once again made his way back to Georgia, where he’s been ever since, becoming an instant sensation at Norcross High School in the greater Atlanta area and earning a reputation for his high-flying dunks combined with incredible athleticism.  The 6-foot-6, 175-pound small forward has already shown flashes of brilliance with a smooth combination of flash and efficiency, a knack for creating space off the dribble and power to finish at the rim.  And that dream of being one of the best high school basketball prospects in the nation? Well, Howard made quick work in that department, earning his spot as ESPN’s No. 5 ranked player in the class of 2024. “I know people are coming for me, but that doesn’t mean anything,” Howard said. “I don’t care who you are. I’m still coming for you regardless.”  Yet, Howard knows there’s still room to grow.  “I feel like I could be way higher,” he said. “I really don’t look into that. I try to just push my game to be the best I can and not focus on the rankings.”   After just one year of high school basketball, a full year before college coaches can reach out directly, Howard has seen his fair share of opportunities at the next level, with offers coming in droves. Howard already holds offers from the likes of Tennessee, Georgia Tech, Georgia, Illinois, Ole Miss, Tennessee State, Georgetown and Florida, among others and hopes to visit Georgia and Georgia Tech before the end of the summer.  “I’m waiting for the real experience with taking visits, having coaches being able to call me themselves,” he said. “That’s what I’m really waiting on.”  When that time comes, Howard will need to learn how to express himself and build relationships with coaches, all while putting to rest questions of his maturity.  “I would certainly agree with in a sense – him needing to mature, but for a 15-year-old dealing with what he’s dealing with at this time in his life, he’s dealing with it very well,” Askia said. “He is continuously working towards being a better young man, which entails maturity.”  Still, Howard refuses to let his fears, concerns or worries cloud his ambitions as he embarks on his pursuit to become the nation’s best.  “If you worry about something, it’s always going to be on your mind,” he said. “It messes up your game. I try not to worry about anything and just stay focused.”  Photo: Slam Follow Jacob Polacheck on Twitter Follow Adam Zagoria on Twitter Follow ZAGSBLOGHoops on Instagram And Like ZAGS on Facebook