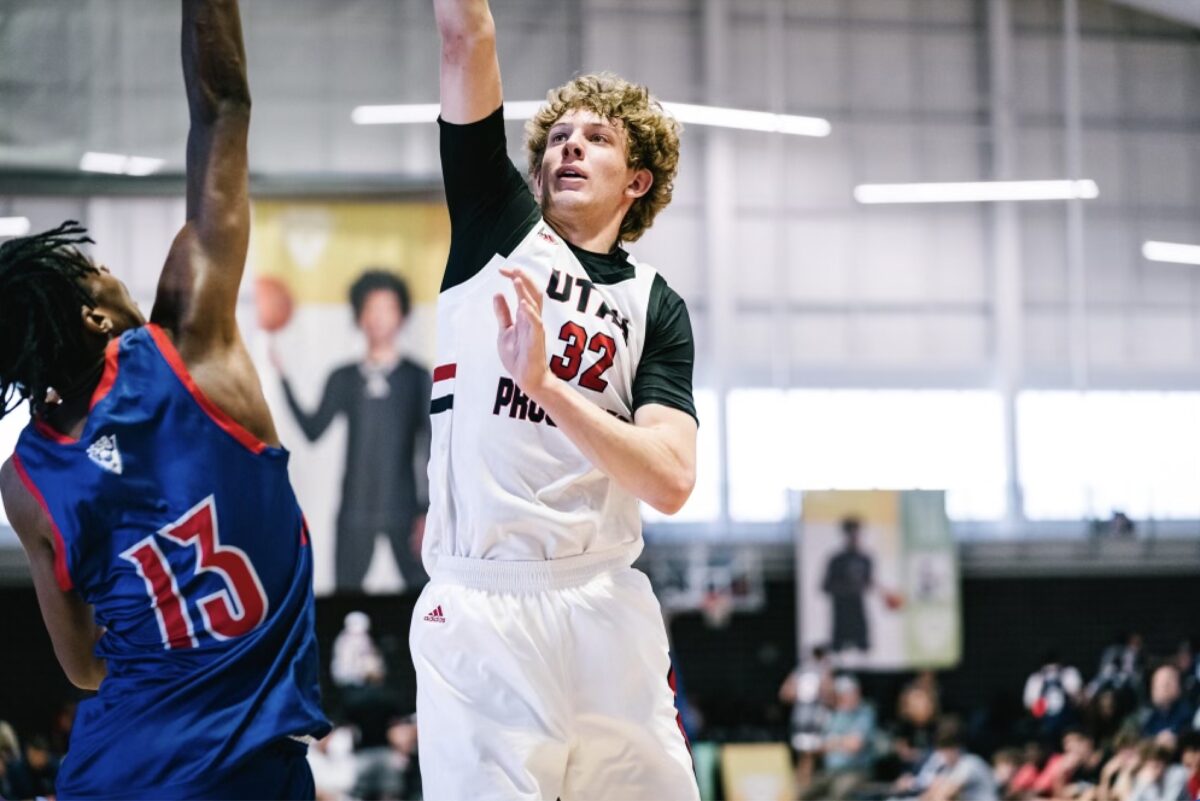 By JACOB POLACHECK ThunderRidge (CO) forward Zach Keller, the nation’s No. 78 overall prospect, is quickly making a name for himself as one of the top front court players in the class of 2022. At 6-foot-9, 220-pounds, Keller is a physical forward that can play in the post and stretch the floor. “I can drive and I’m pretty good in the pick-and-roll,” Keller said. “Just overall, I’m an aggressive player.” Playing for the Utah Prospects this summer, Keller has had his ups and downs, getting others involved, despite being critical of his performance. “Last tournament, probably wasn’t my best, but I did what I could to help my teammates,” he said. “I have a knack for rebounding on the offensive and defensive ends.” Most notably, Keller has worked on his shooting mechanics in order to score the ball more consistently. “It used to be behind my head, but now it’s out in front,” he said. “It’s pretty consistent for the most part.” With a reformed shot, Keller has become a priority for a number of high-major schools and has already started taking campus visits, planning to make a decision later this year. “I’m trying to make an early decision in November, during the early signing period, but if I have to push it back it’s fine,” he said. Keller took his first official visit to TCU in early June and was impressed by the campus and the Horned Frogs’ style of play. “It’s a beautiful campus, in my opinion, and just going to see the facilities, locker room and even some of the educational buildings like business and computer science, it kind of blew me away,” he said. “I had never done a tour of a college. I had been to them for games.” Keller also had the chance to meet with head coach Jamie Dixon and the rest of the staff. “They’re all really talkative and gave me a gameplan of what I would work on when I get there,” he said. “From day one, they have a plan of where I would be every second, so I kind of love it.” Next up for Keller is a trip to Wake Forest for his second official at the end of July. “I’ve heard from Wake Forest that TCU and them have the same kind of campus,” he said. “The coaches say they’re looking for me to be a stretch-four and for me not to play a whole lot my freshman year, but have some minutes. They want me to be a stretch-four. Their campus and everything seems like every college with the nutrition bar, weight plans and great education.” Outside of TCU and Wake Forest, Keller is also being heavily recruited by Utah, Texas Tech, Cal and Arizona State. He broke down each school: Utah: “I took an unofficial there because I practice out in Utah. I decided to visit there with the new coaching staff. The facilities are amazing, in my opinion, probably one of the best in their conference. Also, the coaching staff with Craig Smith coming in as a new coach, they already have a game plan for me of what I would do. Once again, I would be a stretch-four for them. The education is great.” Texas Tech: “I haven’t visited them yet, but I’m going to try and plan it. It’s the same thing – be a stretch-four. My sister’s friend went there and loved it. When I do visit, I have good expectations for them.” Cal: “One of my other friends had a sister who went there and she loved it. I did some research and they have a great education. Once again, I would be a stretch-four. All these schools have a plan for me, which I really love about them. I’m trying to see if I can get a visit there when the time opens up.” Arizona State: “That’s my most recent offer. My oldest sister went there for a couple years and she loved it. I was just up there for two tournaments. Everyone always says the weather there is too hot, but I didn’t mind it. Also, them. I would be a stretch-four and they love the way I play, rebound and the offensive skillset I could bring to the team.” When it comes to his decision later this year, Keller noted fit, play style, education and the campus as important factors. “Do I fit in their program? Their play style? Do I get along with all my teammates and the coaching staff,” he asked. “Then, overall education because you’re not going to play basketball forever, so you have to have a good education to fall back on. You don’t want to go to a school where people don’t take a degree from that school seriously.” Follow Jacob Polacheck on Twitter Follow Adam Zagoria on Twitter Follow ZAGSBLOGHoops on Instagram And Like ZAGS on Facebook