Ron Harper Jr., Geo Baker both withdraw from NBA Draft and will return to Rutgers 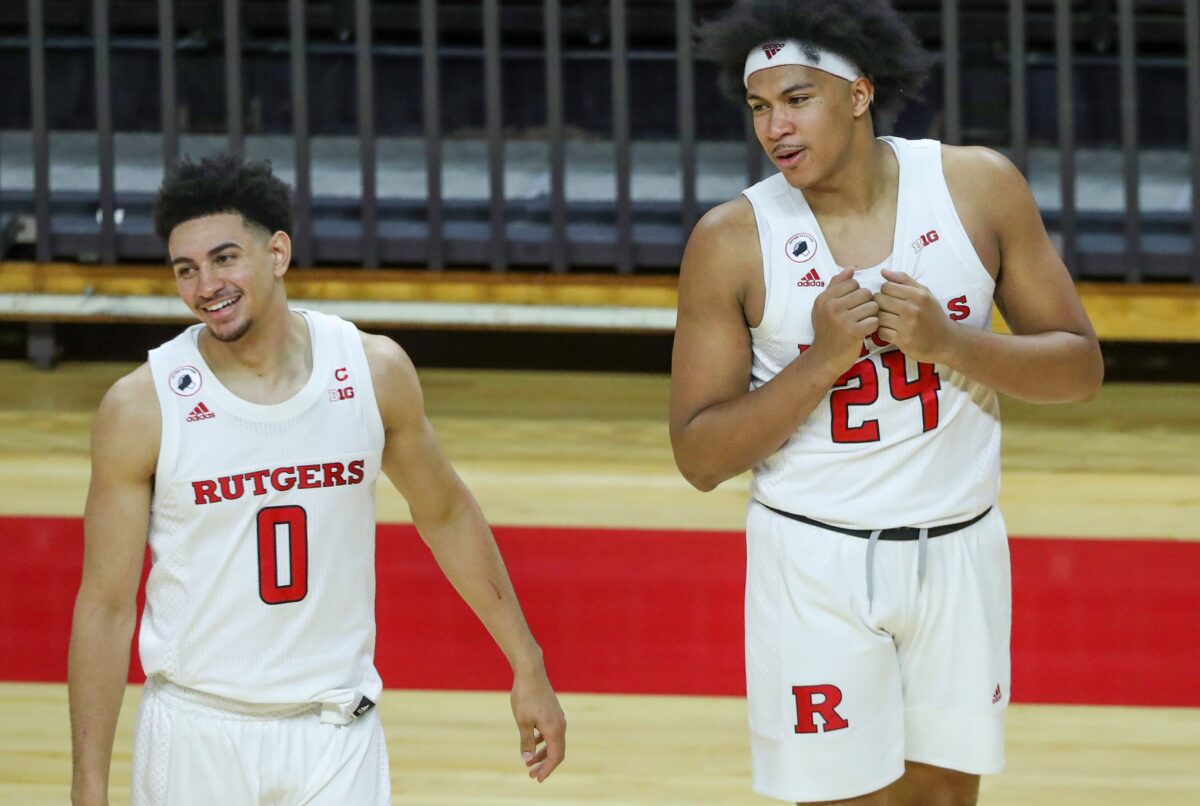 Rutgers stars Geo Baker and Ron Harper Jr. are set to return to campus for the 2021-22 season after withdrawing from the NBA Draft.  “I’m glad that Geo and Ron had the opportunity to explore their opportunities through the NBA Draft process and have decided to return to Rutgers for another season,” head coach Steve Pikiell said. “They were both able to chase their dreams and get valuable feedback that will undoubtedly help them as they continue to work towards their goals. Their impact on our program has been significant since the day they stepped on campus and to have them both back for another year is exciting for our program and all of Rutgers Nation. Their decision to return only increases the excitement I have about our entire roster for this coming season. With the chemistry we’ve been building this offseason, I’m looking forward to seeing this talented group play together and lead us to another great season.”  The duo have been leaders for the Scarlet Knights in helping take the program to new heights. Last season, they helped Rutgers’ qualify for the NCAA Tournament for the first time in 30 years and led RU to a NCAA Tournament victory for the first time in 38 years.  Baker has played in 117 games at Rutgers, making 101 starts. In that time, has averaged 11.1 points, 3.3 assists, 2.8 rebounds and 1.3 steals, shooting 38.3 percent from the field and 32.5 percent from three-point distance with a 1.6 assist/turnover ratio. A three-time All-Big Ten, three-time All-Met selection and three-time Academic All-Big Ten, the Derry, N.H. native has stamped his place as one of RU’s all-time greats. He currently ranks fifth all-time at Rutgers in assists (389), seventh in three-pointers (185), eighth in steals (147) and 18th in points (1,300).   “These past four years have been nothing less than the best four years of my life,” Baker said in a video message to Rutgers fans. “There were highs and lows, twists and turns, and we always found a way to exceed expectations. This past year was especially hard without Rutgers nation out there in the stands while we chased our goals. I can’t even begin to explain how much our team missed that energy out there in The RAC. Although last year was historic, the way it ended still doesn’t sit well with me. We still have some unfinished business to take care of, and I can’t wait to get to it with Rutgers Nation by my side. I’m back!”  Harper Jr. is coming off of a stellar junior campaign, where he was named a finalist for the Julius Erving Award Watch List after averaging 14.9 points and 5.9 rebounds on 44.1 percent shooting. The Franklin Lakes, N.J. native was named Third Team All-Big Ten and First Team All-Met, his second career appearance on each award list. In his three seasons ‘On the Banks’, the Don Bosco Prep product has played in 89 games (76 starts), averaging 11.4 points and 4.9 rebounds on 43.8 percent shooting. He surpassed the 1,000-career point plateau in the Big Ten Tournament.   “Rutgers Nation, I’m back,” Harper Jr. said in a video message he posted to social media. “One more time. The job’s not finished!” With these two announcements, the Scarlet Knights are set to return an experienced roster from last season’s team that made the NCAA Tournament and advanced to the round of 32. The postseason success marked RU’s first NCAA Tournament victory since 1983. Rutgers will return five players that combined to start 84 games last season (Baker, Harper Jr., Paul Mulcahy, Caleb McConnell, Clifford Omoruyi). The announcements see the return of two of the team’s top three scorers from last season and a pair of All-Big Ten and All-Met honorees, joining a number of additional players that gained valuable experience last season as well as newcomers Jalen Miller and Aundre Hyatt.   (Release via Rutgers) Photo: NJ.com Follow Adam Zagoria on Twitter Follow ZAGSBLOGHoops on Instagram And Like ZAGS on Facebook