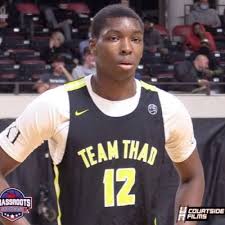 By ZACH SMART After  averaging 23 points through the first set of games during the BCAT Top 100 in Memphis, Class of 2022 forward Malik Dia continues to register his presence as one of the fastest rising and intriguing unsigned prospects.
Beyond a wide ranging offensive game and a smooth outside stroke which elicits mismatch issues, the 6-foot-9, 195-pound Dia is a high level athlete who turns in dazzling above the rim finishes. A bevy of noteworthy programs are suddenly in active pursuit of the wing/four man, he of the 7-foot wingspan.   “Right now I am hearing from Georgia, Florida, Vanderbilt, Virginia Tech, Nebraska, Creighton, St. John’s, and Loyola Chicago,” explained Dia, who will play with Team Thad on the EYBL circuit during Peach Jam.  Vanderbilt offered on June 16. Offers from Nebraska, TCU, Creighton, St. John’s, and Loyola Chicago are all on the table.  With his patented fall away jumper, defensive versatility, and ability to make plays off the glass, Dia’s style aligns with today’s high major game.
Now a seasoned senior at Ensworth High School (Nashville, Tenn.), Dia is anticipating a leadership role as the focal point in 2021-22.  “Coach (Ricky) Bowers expects me to be the leader,” the 17-year-old Dia said. “He expects me to be the guy that carries this team to a state championship.” Follow Zach Smart on Twitter Follow Adam Zagoria on Twitter And Like ZAGS on Facebook

Class of '24 Scotland Campus guard Brant Byers on the rise