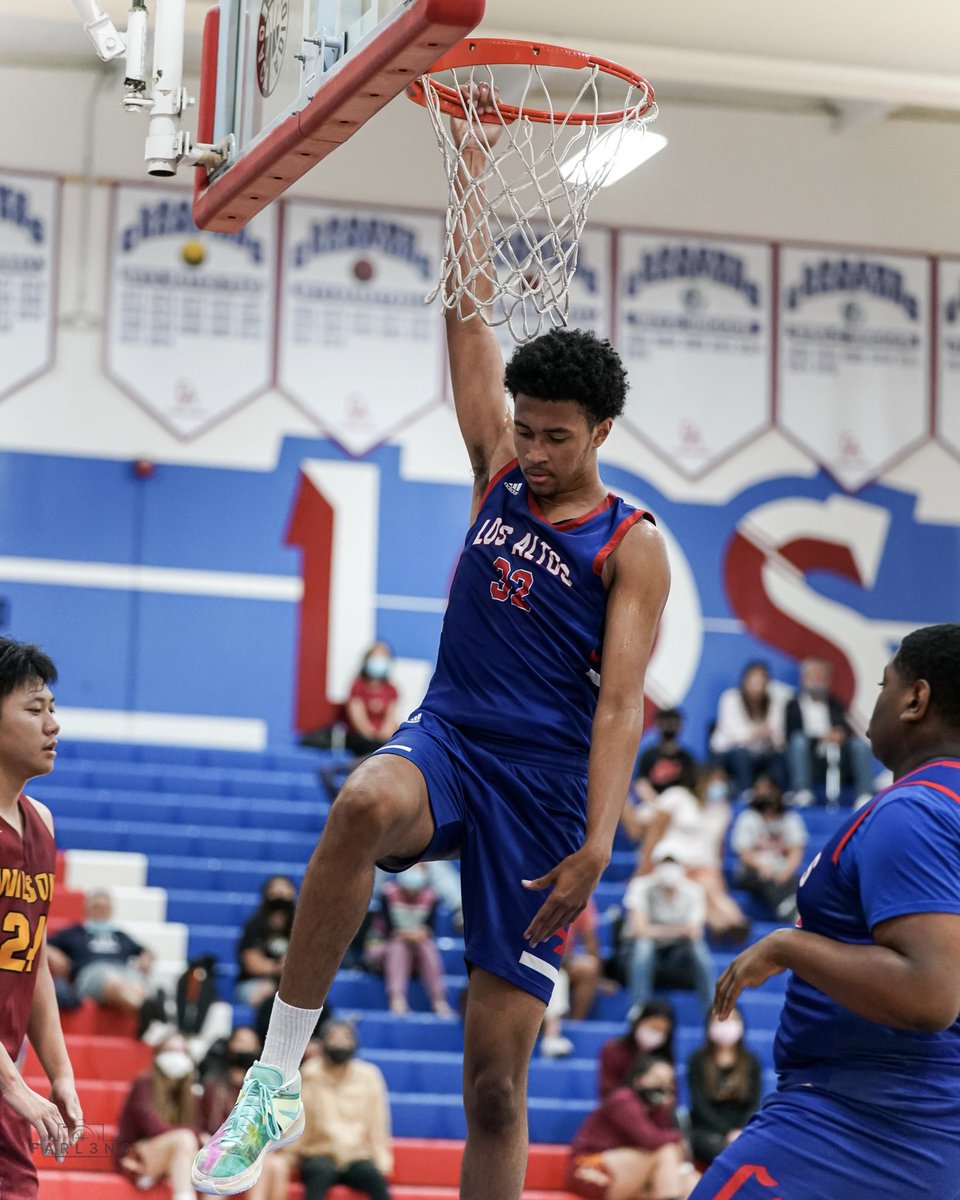 By JACOB POLACHECK If you haven’t heard of class of 2023 center Jazz Gardner by now, you’re sure to hear about him this summer. The 7-foot, 225-pound big from Los Altos (CA) has college coaches clamoring about his potential heading into his junior season, with seven offers already and interest across the board. “He’s got a lot of good overall talent,” Los Altos head coach Jeff Lucas said. “He’s a good shooter for his size. He’s a good passer, sees the floor real well.”  As a freshman at Los Altos in 2019-20, Gardner averaged 12 points, 10 rebounds and five blocked shots. Yet, it was his sophomore season that put his name in the national spotlight, doubling his scoring output and averaging 25.1 points and 13 rebounds per game as a sophomore. So by the time the contact period hit on June 15, recruiting was anything but calm for Gardner, being contacted by Memphis, Coastal Carolina, San Francisco, UCLA, USC, Florida State, Pepperdine, Gonzaga, Ohio State, Cal, UCSB, Washington, Michigan, George Washington and more. “It’s very overwhelming, I mean to me at least,” Gardner said. “Some people might not get the opportunities that I have and I’m very blessed for it, but it’s not as chill as I thought it would be.” Among the schools that have offered, Gardner has heard from Pepperdine, USC, Kansas and UCSB in recent days. He broke down each school: Pepperdine: “My dad went there back then. Him and I have a really good relationship. We’ve known them for probably five years now. It would be a great reunion story. We don’t know yet. We’ll see how that goes.” USC: “Good coach, great people over there. I just started talking with them though so I’m not sure. We’ll see. It’ll probably be a great situation for me over there, too.” Kansas: “Coach [Kurtis] Townsend is a great person and a great coach,” Gardner said. “I saw their facilities. I know their facilities are really nice. I know their coaches are nice and they’re known for having great bigs. It would be a great option, too.” UCSB: “All I know so far is that the coach is really good. He’s really nice. He’s a real good coach. It’s a great school.” None of this attention comes as a surprise to the Gardner family, with his father, Jelani, a breakout high school star in his day. After spending his high school years at St. John Bosco (CA) and being named a 1994 McDonald’s All American, Jelani joined the Cal Bears, expected to be a star prior to the 1994-95 season. Amid a clash over playing time, Jelani left Cal to prepare for the NBA Draft. On top of this, while preparing for the NBA Draft, a physical exam revealed that Gardner had a kidney disease. In order to boost his draft stock, Gardner transferred to Pepperdine, posting averages of 14.0 points, 4.0 rebounds and 4.9 assists per game. After going undrafted in 1999, Jelani began a career overseas. That’s when Jazz entered the picture. Even as a young boy born in France, Jazz has always looked the part of a future center. “When he was two or three years old, people thought he was five or six,” Jelani said. “He’s always been really big, hence his nickname ‘big’.” However, it was his younger brother, JaiYon, that was expected to be the hoops star. “He was always better than me, so he would always get the oo’s and ah’s,” Jazz said. “My brother was always better than me. I was behind him. He was leading. I just kept on working to get where I am now.” While JaiYon was more of a basketball natural, getting and-ones and hitting threes, Jazz was steady working. By the time Jazz was an eighth grader, he stood tall at 6-foot-8 and his work began to show. Then, as a freshman, Jazz grew to 6-foot-10, setting up that impressive double-double rookie campaign. Now, the 7-foot rising junior is using his father’s experience to help him navigate the complicated world of recruiting. “I’ve been through everything that he’s going to go through,” Jelani said. “I’ve been through the draft combine. I’ve done workouts for teams. I’ve been through training camp. I’ve been through summer league workouts and college. I’ve been to two universities. I played overseas for 10+ years. I was a McDonald’s All American. “I know the process of that. I’ve been through everything that they’re going to go through, so I think the guidance that I give them, the way in which we navigate this business is key as to why they are who they are.” Before the process gets fully underway, however, Jazz has his sights set on gold. This summer, Jazz will be participating with the French National Team in the U-18 European U18 Championships from August 3-8. “It was really exciting, you know,” Jazz said. “I definitely didn’t expect it. It was really great that I get to play for the country I was born in.” Ranked by 247Sports.com as the No. 5 center and No. 48 overall prospect in the class of 2023, many are expecting Jazz to use these summer experiences for a breakout junior season. “He’s one of those guys that are going to be working, whereas some guys will get a little lazy,” Lucas said. “I know his dad and family are going to push him. He’s going to make great strides next year.” Photo: Sammy Santillano Follow Jacob Polacheck on Twitter Follow Adam Zagoria on Twitter Follow ZAGSBLOGHoops on Instagram And Like ZAGS on Facebook