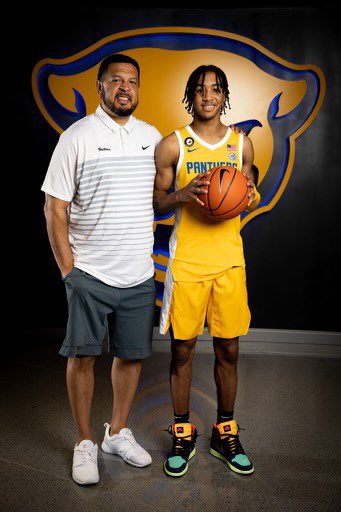 By JACOB POLACHECK Class of 2022 four-star combo guard Judah Mintz has committed to Pittsburgh, he tells ZAGSBLOG. “I’m committing to Pitt,” he said. “On my visit, it really felt like home. Everything felt natural with the staff for me and my parents.” Mintz took his first official visit to Pitt on June 5. The 6-foot-3, 165-pound combo guard from Oak Hill (VA) Academy and the Team Durant AAU program, chose Pitt over offers from Penn State, Georgetown, DePaul, Florida, George Mason, LSU, Maryland, Virginia Tech, South Carolina and Wake Forest, among others. Mintz also took an unofficial visit to Georgetown (June 8) and an official visit to Penn State (June 10-11) before ultimately committing to Pitt. “They want to get up and down and have their guards play with freedom,” he said. “[They would] allow me to play on and off the ball with opportunity to make an immediate impact.” Ranked by 247Sports.com as the No. 14 combo guard and No. 83 overall prospect in the class of 2022, Mintz is a two-way player that can score the ball consistently. “Most of all I’m a winner,” Mintz said. “And that always comes first for me.” Despite being the first commit in the Panthers’ 2022 recruiting class, Mintz already has his sights set on doing some recruiting of his own. “It’s a couple wings and bigs that we’re working on bringing in with me but no one specific person right now,” he said. “I can tell you more after this first live period.” Follow Jacob Polacheck on Twitter Follow Adam Zagoria on Twitter Follow ZAGSBLOGHoops on Instagram And Like ZAGS on Facebook