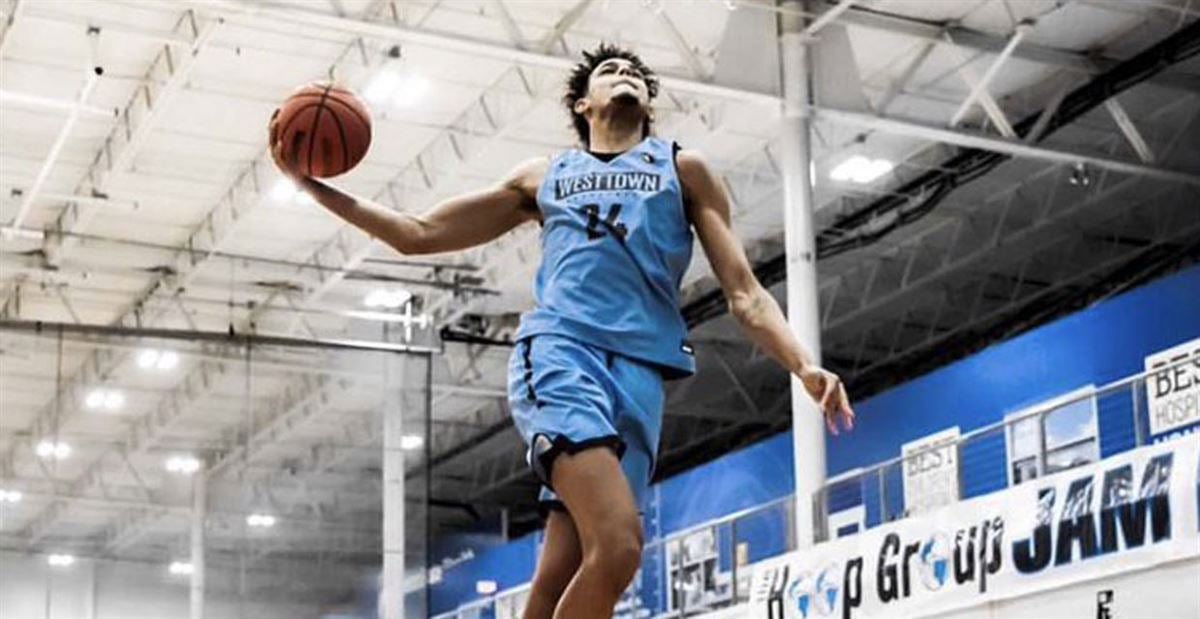 By ADAM ZAGORIA PRINCETON, N.J. — On the first day that college coaches could go out and evaluate high school prospects in more than a year, Dereck Lively was a star attraction. Duke coach-in-waiting Jon Scheyer and associate head coach Chris Carrawell and North Carolina coach Hubert Davis and assistant Brad Frederick, as well as Michigan associate head coach Phil Martelli, were among those on hand to watch the 7-foot-1 Lively and his Westtown (PA) School team at The Hun School. “It’s definitely a great pleasure to be back out here, we definitely took it for granted before Covid,” Lively said after going for 17 points, 21 rebounds and 4 blocks in a 64-53 win over Zion Cruz and The Patrick School in the first of two games Friday. “It’s definitely a treat to be back out here and I’m just ready to show what I can do.” As far as recruiting the No. 3-ranked center in the Class of 2022 per 247Sports.com, Lively plans to drop his top seven schools June 24. North Carolina, Duke, Kentucky, Michigan are on the list, and Memphis and Penn State are also in the mix. “I already went to an official visit to UNC so it was great to see coach Hubert again and it’s great to see coach Scheyer, just seeing them in the crowd gets me going and makes me play my best of course,” he said. As for the UNC visit, he said, “It was a great experience, I really like the energy and the environment overall of the campus, it was a college I could definitely see myself at so I’m definitely taking that into consideration.” He will visit Kentucky officially on June 20 and Duke on June 29. On Kentucky, Lively said he’s a big Anthony Davis fan and tries to model his game after the Lakers big man. “I’ve definitely been watching him and his game over the years, just kind of studying him and just watching him and trying to take things that he does and mark them down in my head or execute them in the same way,” Lively said. As for Coach John Calipari’s message, Lively said, “He said if you come here, you can dedicate your life to the game and that’s definitely something I’ve been thinking about and just wanting to do. You go there and just become a pro, it just becomes a business at that point. Your life becomes basketball and you’re just naturally going to be better being around the basketball every day so I could have a mentor just like Coach Cal and kind of do the same thing he did with Anthony Davis.” As for Duke’s message, Lively said, “You come here and the Duke Brotherhood ain’t going down or anything like that just because Coach K is stepping down. He’s still going to be there, the development is still going to be there and just the overall feeling of being a Duke athlete is still going to be there because I’m still going to be able to be coached by Coach K, he’s still going to be staying in the mix and staying in the whole development process throughout my recruitment if I go there.” Michigan coach Juwan Howard will see Lively next week at Blair Academy. “Under Juwan, he’s going to train me under me and develop me under his wing and just stay in the gym and it’s just going to become a business which is something I’m really taking into consideration,” he said. Lively said the NBA G League “is something I’m considering for sure but right now I’m mainly just thinking about college mainly.” Lively runs with the loaded Team Final squad that also includes Jalen Duren, Emoni Bates, Jameel Brown and Otega Oweh, and is the favorite to win Peach Jam. “It’s just so much fun playing on there,” he said of Team Final. “All the players on there have the same goal but we have different personalities. We all want to win which is great.” Westtown coach Seth Berger said Lively’s upside is through the roof. “We’ve coached three lottery picks, one NCAA champion, 25 Division 1 kids and four other pros, and I’ll tell you if I coach another 20 years, Dereck Lively will be the best player I ever coach,” Berger said. “When your best player plays harder than any other player on your team, your team’s going to be really good. He’s got a combination of IQ, effort, size, hands and grit that just is one of a kind. He’s also an absolutely phenomenal teammate. He just wants to win, he doesn’t care how many shots he gets, how many points he gets, he just wants to impact the game to win. “I will be lucky to ever coach a kid who is as talented and committed as Dereck is ever again.” Follow Adam Zagoria on Twitter Follow ZAGSBLOGHoops on Instagram And Like ZAGS on Facebook

Through hardship, Jeremiah Jenkins is standing strong as one of 2024's most intriguing prospects