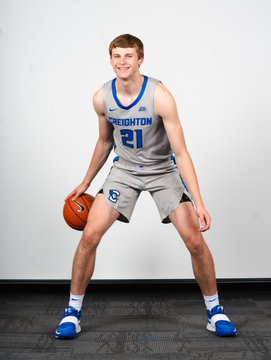 By JACOB POLACHECK Isaac Traudt, the 6-foot-9, 205-pound power forward from Grand Island (NE) Senior High School, started off the NCAA quiet period with an unofficial visit to Creighton on Tuesday (June 1). “Coach [Greg] McDermott has been recruiting me hard and we have a great relationship,” Traudt said. “They were also the first school to come watch me play and recruit me so just having that relationship early appeals to me.” Traudt, the nation’s No. 9 ranked power forward according to 247Sports.com, said the Creighton staff spent the entire day with him and his family. “The staff really made me feel like a priority,” he said. “They think I fit their style of play and culture extremely well.” Traudt is set to take his first official visit to Nebraska this weekend (June 4-6). He also has visits planned to Virginia (June 11-13), Michigan State (June 17-19) and North Carolina (June 27-29). “I’m just trying to build relationships with the staffs and returning players and find out more about how I fit,” he said. Follow Jacob Polacheck on Twitter Follow Adam Zagoria on Twitter Follow ZAGSBLOGHoops on Instagram And Like ZAGS on Facebook