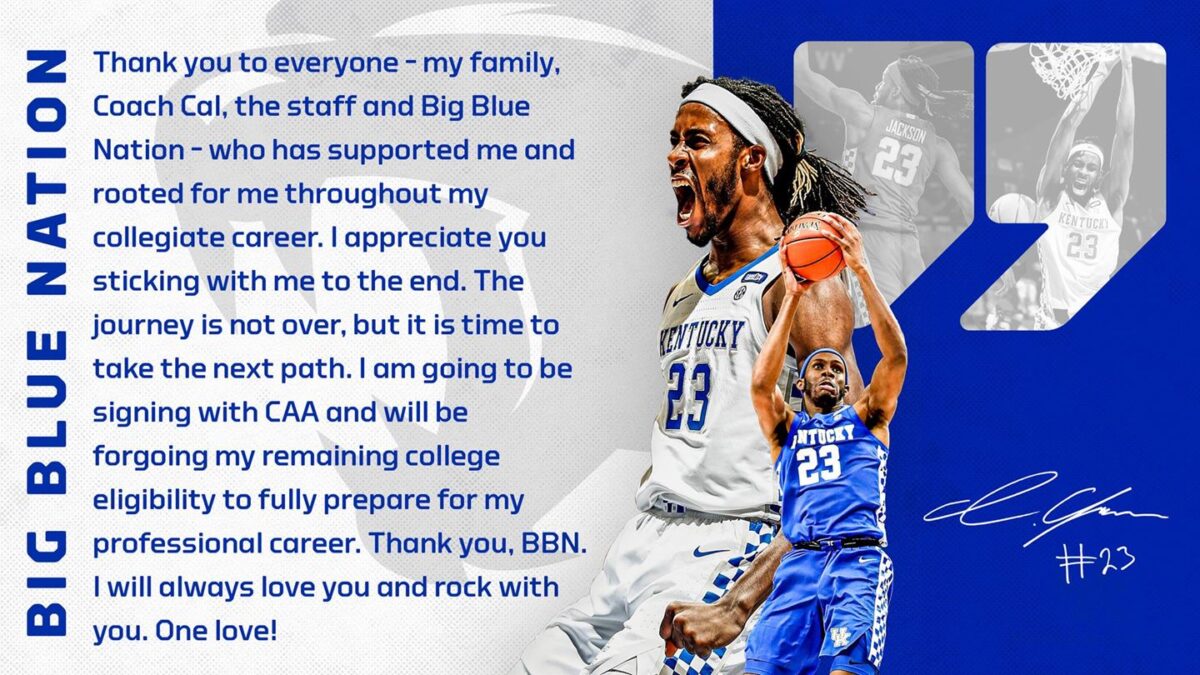 Kentucky men’s basketball freshman forward Isaiah Jackson will remain in the NBA Draft, ending his collegiate eligibility after an impressive freshman season at UK. “Thank you to everyone – my family, Coach Cal, the staff and Big Blue Nation – who has supported me and rooted for me throughout my collegiate career,” Jackson said. “I appreciate you sticking with me to the end. The journey is not over, but it is time to take the next path. I am going to be signing with CAA and will be forgoing my remaining college eligibility to fully prepare for my professional career. Thank you, BBN. I will always love you and rock with you. One love!” Jackson initially declared for the NBA Draft in mid-March but left the option open to return to school. Under NCAA rules, players can sign with an NCAA-certified agent, receive feedback and still return to school. After two months of evaluations, Jackson, who is projected as a first-round pick by national analysts, has decided to remain in the July 29 draft. “I’m happy for Isaiah and his family,” UK head coach John Calipari said. “Seeing his growth this season was amazing. His metrics are off the charts. Whoever drafts Isaiah is going to get an unbelievable defender who can guard multiple positions and protect the rim. Offensively, we saw his game really start to take off at the end of the season. The team that gets Isaiah is going to be surprised because he has only begun to scratch the surface on who he is going to be as a player. I can’t wait to see what he does at that next level. We wish him well.” Jackson will join freshman guard Brandon Boston Jr. and senior forward Olivier Sarr permanently in the draft pool. Davion Mintz has also declared for the NBA Draft but has not made a final decision while he goes through the draft evaluation process. Mintz will have until July 7 (10 days after the NBA Draft Combine) to make a final decision as to whether he wishes to remain in the draft or return to Kentucky. Jackson’s ability and athleticism were evident early in his freshman campaign and he transformed into an All-Southeastern Conference Freshman and Defensive performer by the end of the season. The freshman forward averaged 8.4 points and 6.6 rebounds in 25 games with 18 starts. Over the last seven outings, he logged 13.3 points and 6.9 boards per game and reached double-figure scoring in all but the last contest. Jackson recorded two double-doubles on the season, both of which came over the last seven games. He shot 63.3% from the floor during that span. Jackson was an elite shot blocker from the start. He burst onto the national scene in his third career game when he blocked eight shots against No. 7/5 Kansas. It was the most rejections in a game for any Wildcat since Willie Cauley-Stein blocked nine shots against Boise State on Dec. 10, 2013, and it was the most ever by a UK player vs. an Associated Press top-10 opponent in program history. The Pontiac, Michigan, native swatted 65 shots this PAST season to lead the nation’s No. 3 shot-blocking team. He led the SEC with 2.6 rejections a game and ranked 15th nationally. Jackson led the Wildcats in blocks in 20 of 25 games and recorded three or more swats in nine outings. The 6-foot-10 forward also induced 19 steals on the season. Although Jackson’s final block numbers did not rank as high as Kentucky’s elite shot blockers because of the shortened season, his defensive metrics did. Not only did his block percentage of 12.7% rank eighth nationally, it stacked up favorably with UK’s three single-season blocked shots leaders in Anthony Davis (13.8% in 2011-12), Nerlens Noel (13.2% in 2012-13) and Willie Cauley-Stein (12.3% in 2103-14). Jackson’s 5.0 blocks per 40 minutes were also on par with Davis (5.8) and Noel (5.5) to pace one of the best defensive teams in the country. In addition to his season-long defensive dominance, Jackson emerged offensively down the stretch. He notched 18 points and 11 rebounds against Auburn, posted 16 points and seven boards in the upset win at No. 19/20 Tennessee, and totaled 13 points and 10 rebounds in UK’s 92-64 regular-season finale win over South Carolina. Jackson grabbed 12.7 rebounds per 40 minutes, among the best marks during the Calipari era, and recorded a team-high seven double-figure rebounding games. In the second half of a win over LSU, after sitting much of the opening stanza with foul trouble, he hauled in 13 rebounds after halftime. It was the most rebounds by a UK player since Nick Richards hauled in 16 boards vs. Arkansas on Feb. 26, 2019. According to STATS, Jackson became the first player with 15 or more rebounds in fewer than 20 minutes played against a major conference opponent since VMI’s Eric Mann had 17 boards in 19 minutes against South Carolina on Dec. 28, 2000. Since Calipari joined the Kentucky program for the 2009-10 season, UK has produced 41 NBA Draft picks over 11 seasons, far and away more than any other school. Included in the 41 are 31 first-rounders, three No. 1 overall picks and 21 lottery selections.  Of the 28 players at UK who have declared for the NBA Draft after their freshman seasons, 26 have been first-round picks (and all 28 have played in an NBA game). Calipari is 30 for 32 in that regard when including his players from Memphis. Of the 66 players who have finished their college careers at Kentucky under Calipari (through the 2019-20 season), 41 were selected in the NBA Draft, a 62.1% success rate. Another six of those made the NBA, and the majority of the rest were walk-ons. Calipari’s players are not only reaching the next level, they are succeeding when they do. Since 2010, eight of his players have garnered 26 All-Star selections. Derrick Rose (from Memphis) was named league MVP in 2011. Five of his players have been tabbed All-NBA (Rose, John Wall, Davis, DeMarcus Cousins and Karl-Anthony Towns), three have been named NBA Rookie of the Year (Rose, Tyreke Evans and Towns), and 14 players from Calipari’s first 10 teams at Kentucky have made the NBA All-Rookie teams. (Release via UK) Follow Adam Zagoria on Twitter Follow ZAGSBLOGHoops on Instagram And Like ZAGS on Facebook