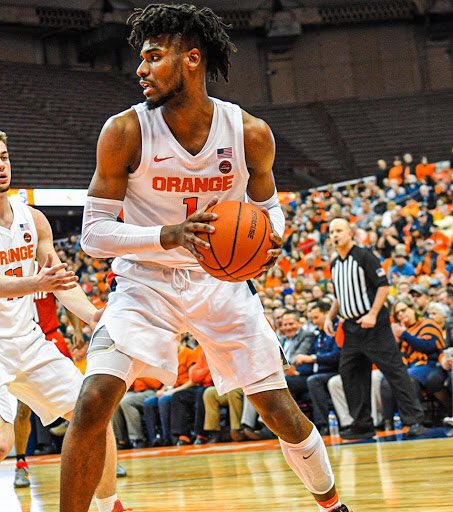 By ADAM ZAGORIA Syracuse transfer Quincy Guerrier is down to a top four and will announce Thursday at 4 E.T., he tells ZAGSBLOG. The 6-foot-7 Montreal native is considering Illinois, Arizona State, Memphis and Oregon. He initially committed to Syracuse in October 2018 over Illinois and Oregon. Guerrier averaged 13.7 points and 8.4 rebounds as a sophomore at Syracuse, and would have up to three years of eligibility remaining. “For the four schools, I feel like it’s really a good fit for me,” he said. “I will play my position. “Illinois is playing really fast, they’re really good defensively. Same thing for Oregon. Memphis, they play really fast and they play good defense Arizona State, they have the freedom of their plays. “It’s the same thing for the four schools, to be honest. They’re pretty much the same for me, but I think there’s something that will separate them for me so we’ll see.” Follow Adam Zagoria on Twitter Follow ZAGSBLOGHoops on Instagram And Like ZAGS on Facebook