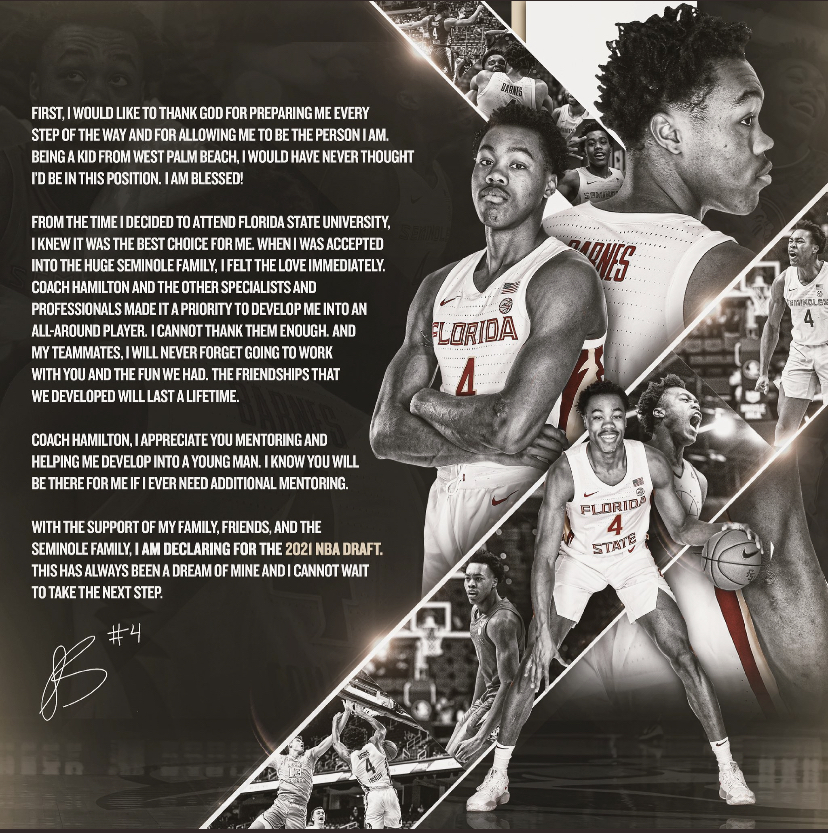 By TOBIAS BASS Florida State freshman guard Scottie Barnes has declared for the NBA Draft, he announced Friday on his Twitter. He will pursue a professional career with the representation of an agent. Barnes is projected to be an NBA Draft lottery pick and becomes the fourth one-and-done player during coach Leonard Hamilton’s tenure at FSU. All four players have come over the past six seasons. “From the time I decided to attend Florida State University, I knew it was the best choice for me,” Barnes said via release. “When I was accepted into the Seminole family, I felt the love immediately. Coach Hamilton and the other specialists and professionals made it a priority to develop me into an all-around player. “With the support of my family, friends and the Seminole family, I am declaring for the 2021 NBA Draft. This has always been a dream of mine and I cannot wait to take the next step.” The 6-foot-9, 227-pound guard, appeared in 24 games, started seven, and was a big catalyst for the Seminoles during their run to the Sweet 16. The West Palm Beach (Fla.) native averaged 10.3 points and 4.0 rebounds per game this past season. He led the team with 98 assists and steals at 35. His efforts named him the 2021 ACC Freshman of the Year and 2021 ACC Sixth Man of the Year. He also earned his way onto the All-ACC Third Team and the All-ACC Freshman Team. Follow Tobias Bass on Twitter Follow Adam Zagoria on Twitter Follow ZAGSBLOGHoops on Instagram And Like ZAGS on Facebook