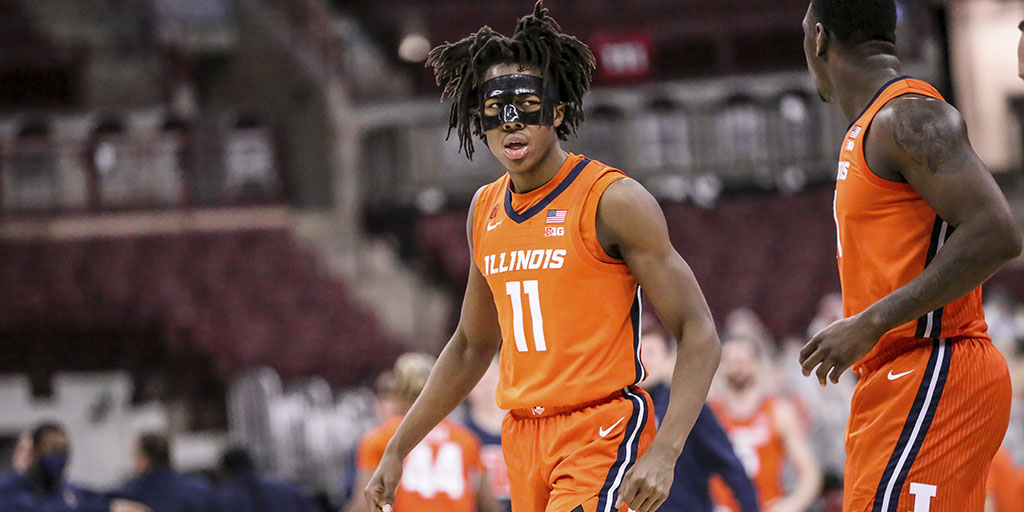 Illinois junior guard Ayo Dosunmu declared for the NBA Draft on Tuesday on ESPN’s The Jump. He is listed as the No. 22 Best Available prospect by ESPN.com. The NBA Draft is July 29. Dosunmu averaged 20.1 points, 6.3 rebounds and 5.3 assists during his junior season, becoming the first NCAA player in the last 11 years to average at least 20 points, six rebounds and five assists. He accumulated the most impressive single-season list of accolades ever by an Illini player, highlighted by USA Today National Player of the Year, Bob Cousy Point Guard of the Year, and consensus first-team All-American.  “Last year I went through the draft process and I got so much feedback from almost every NBA team and I just wanted to turn what they said – the constructive criticism – and I worked at it. I improved on pretty much all my offensive and defensive stats,” Dosunmu said during the interview with Rachel Nichols, Richard Jefferson and Kendrick Perkins. “My body, I gained 7-8 pounds. Shout out to Coach Fletch; we put a lot of work into the weight room. My coaches; they helped me each and every day; long nights in the gym. And I just think I see the game better. I see the game much differently, being a junior, being 21 years old. And putting so much work into my film. That’s what makes me believe I’m ready for the NBA.” Dosunmu helped lead Illinois to a 24-7 record, including a 16-4 mark in conference play followed by the Big Ten Tournament championship. The Illini earned an NCAA Tournament No. 1 seed and set a school record by defeating six top-10 teams during the season. Illinois finished the year at No. 4 in kenpom, the second-highest rating in program history.  (Release via Illinois Basketball) Follow Adam Zagoria on Twitter Follow ZAGSBLOGHoops on Instagram And Like ZAGS on Facebook