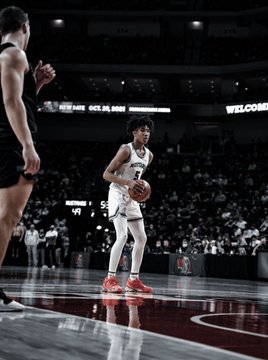 By JACOB POLACHECK After committing to Gonzaga on March 26, Class of 2021 five-star guard Hunter Sallis has officially signed. “Hunter is a great person, that comes from a great family,” head coach Mark Few said April 15 in a release. “He is a high character individual with a bright future. We’re looking forward to having him on our team and in our Zag family.” The 6-foot-5, 175-pound combo guard from Millard North (NE) High School, chose the Zags over Kentucky, North Carolina, Iowa State, Kansas, Creighton, UCLA and Oregon. “Spokane reminds me a lot of Omaha. Not much going except basketball and school. That’s the way I like it,” Sallis said in an interview March 26 with ESPN’s Paul Biancardi. Ranked by 247Sports.com as the No. 2 combo guard and No. 6 overall prospect in the Class of 2021, Sallis joins Kaden Perry as the second commit in the Zags’ 2021 recruiting class. Gonzaga, the No. 1 overall seed in this year’s NCAA Tournament, is set to face Creighton Sunday in the Sweet 16. Follow Jacob Polacheck on Twitter Follow Adam Zagoria on Twitter Follow ZAGSBLOGHoops on Instagram And Like ZAGS on Facebook