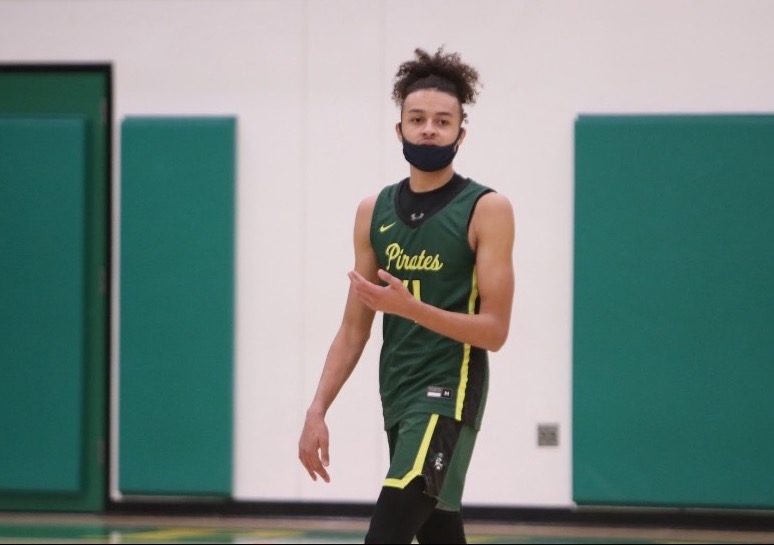 By JACOB POLACHECK After spending most of last season coming off the bench for a senior heavy team at Park Center (MN) Senior High School, Class of 2022 guard Braeden Carrington is starting to get his time in the spotlight. Still recovering from a partially dislocated tendon in his right wrist, Carrington has still looked like a high-major Division 1 prospect. “I’m slowly, gradually getting it back,” he said in a phone interview with ZAGSBLOG Wednesday. “Honestly, I think I’ve been playing pretty good and I’ve been stepping up into the point guard position more because I usually play the two-guard. Honestly, I think I’m doing a very decent job this year. Carrington says his wrist is ‘still hurting a lot’, but he continues to play through the injury. “The other choice was to get in a cast again and I didn’t want to do that,” he said. “It lingers here and there. It still hurts, but I’ve played through it and I’m dealing with it until it gets better.” Carrington, a 6-foot-3, 165-pound combo guard from Minneapolis, MN, describes himself as a ‘shot-creating point guard’. “I facilitate very well,” he said. “I can shoot the ball well. When I get hot, I’m hot. “I have all types of range. I can shoot the mid-range, get to the basket. My defense is very solid. I think I’m just a great all-around player, in my opinion.” Carrington’s game has developed mightily over the past year, leading to offers from Florida, Minnesota, Missouri and Seton Hall. “It’s fun. I get to talk to a bunch of different coaches,” he said. “I’m just waiting to get out to visit a couple colleges in the spring or summer. “So far, it’s nice, building bonds with a bunch of different coaches. Growing up, I never thought I’d have this opportunity.” He broke down each school for ZAGSBLOG: Florida: “They like my game. They like how I can shoot the ball, that’s how most of the colleges see me. They like how I can shoot the ball. If I keep playing well and playing my game, they said that when I got there, I could fit in the system and see how it goes.” Minnesota: “They’ve been playing really well the last two years, especially this year. Their program has been doing very well. Marcus Carr has been playing great. I don’t remember the last time they’ve done this, but they’re 11-1 at home and top-25 team. They’re playing very good basketball. If they keep getting good recruits, they’ll be a good program to go to in the next couple years.” Missouri: “It’s like the same thing. They’re really standing out this year. I don’t know how they’re looking in the next couple years. I’d say they’re a top-25 team, like Minnesota. They’re a fun team to watch. They play hard which is something I’d want to be a part of. ” Seton Hall: “They said I could be a Myles Powell-type player. I might not shine the first year or so, first year or two, but eventually once I fit and get used to the college level, I’ll be the dude, just out there scoring 20 points a night, getting shots up and having fun.” Carrington says he wants to take visits to Florida, Minnesota, Baylor, Missouri, Kansas. Kansas and Baylor have recently started showing interest in Carrington and he broke down each school Wednesday: Kansas: “I haven’t talked too much with them, but the times we have talked, they’ve said that they’ve heard a lot about me. They’ve seen some clips and stuff like that and they like how I shoot the ball. They say I could really fit in their play style. That’s pretty much it. They said they want to keep talking and get to know me better.” Baylor: “We have a good relationship because of Dain Dainja, who was my teammate in high school. He talks to me a lot. My head coach has a good relationship with the coaches there. They just like what they see in me. They think my future is really bright and that I could fit that team. I just have to get bigger and stronger. I’m a little bit small for my size. I don’t see that being a problem.” Carrington says he’s looking at academics and fit when making his college decision. “Honestly, it’s what school can really help me with my academics the best,” he said. “If basketball doesn’t work out, then I want to have a good future after that. “Obviously, I want a good basketball program, but I’m looking at what fits best for me and my mom.” Carrington also may be nearing a decision within the next year. “I was thinking around, maybe a month or so before my senior season,” he said. “Maybe after, if I have to wait that long, but I’m not sure yet.” Follow Jacob Polacheck on Twitter Follow Adam Zagoria on Twitter Follow ZAGSBLOGHoops on Instagram And Like ZAGS on Facebook