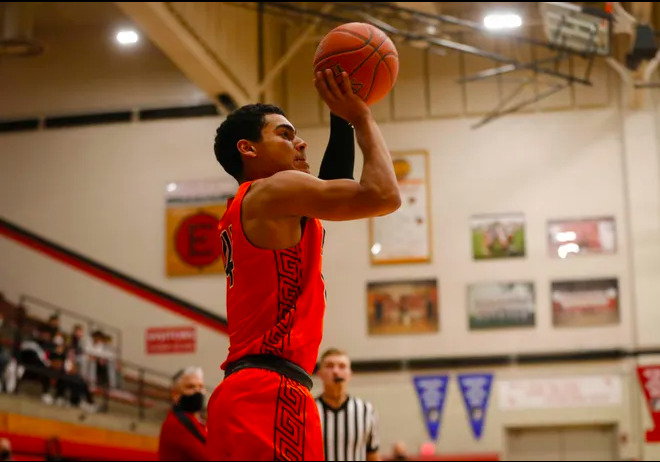 By JACOB POLACHECK Class of 2022 guard Tamin Lipsey is making major strides this season after missing the entirety of his sophomore season due to a torn ACL in his left knee. “It’s felt really good,” Lipsey said in an interview with ZAGSBLOG Saturday. “I really don’t notice it anymore. It’s past 100 percent. “This summer helped out a lot. I got a few games with AAU in a few tournaments, which helped getting back into things. It feels really good. I have no problems.” The 6-foot-2, 190-pound point guard from Ames (IA) High School, is averaging 19.0 points, 4.0 rebounds, 5.0 assists and 2.0 steals per game this season. “He’s making strides in the right direction,” Ames High School head coach Vance Downs said. “If he gets back to his old self here shortly, which I think he will, then he’ll be really, really impressive.” Ranked by 247Sports.com as the No. 27 point guard in the Class of 2022, Lipsey says he’s now focused on improving his shooting. “I wouldn’t say shooting is a weakness, but I could improve it a lot,” he said. “That would help me at the next level.” As he continues to progress through his junior season, Lipsey says three schools are recruiting him the hardest. “I would say Nebraska, Minnesota and Iowa State,” he said. He broke down each school: Nebraska: “Coach [Fred] Hoiberg is a great coach. He has a lot of experience. He played in college and the NBA. He also coached at both levels. I’ve known him for a while. I know that he could help my game a lot and help me get to the next level. That really attracts me there. Also, I know that he’s building up that program. It’s his second year there, so it’s a process. Just my relationship with him is a big factor there.” Minnesota: “I didn’t really know much until this past year, past summer, but I’ve been in contact with some assistant coaches up there. I’m getting to know more about them everyday. Obviously, they’re a really good team this year. I’m just building a relationship with the coaches, watching how they play and seeing how I could fit in there.” Iowa State: “Obviously, I live very close. That was my first offer, so that means a lot. I have a good relationship with coach [Steve] Prohm and all the other coaches on the staff. “Iowa State has had a great program in the past. They’re struggling a big, but they’re young with new players. They’re always a great team and a great program for guards. They have a lot of guards that get to the NBA, so that’s good.” Lipsey has taken unofficial visits to Iowa State and Nebraska. “Hopefully, when we’re able to take some visits, I’ll be able to branch out and look at some more schools,” he said. Lipsey says Illinois, Arizona, Virginia Tech are also in contact regularly. “I’m in contact with them at least once a week, probably a couple times a week,” he said. Despite not having a timetable, Lipsey says he’s been thinking about a decision lately. “I’ve been thinking [about the] summer, but you really never know,” he said. “If new coaches contact you it can get pushed back. Really right now, I don’t have one. It’s really open for recruiting still.” When making his decision, Lipsey says the biggest factor is his relationship with the coaching staff. “I think that’s a big deal because you want to be able to communicate with them on a good level so you’re on the same page,” he said. “That can take you a long way on the court and in life in general.” Photo: Des Moines Register/Bryon Houlgrave Follow Jacob Polacheck on Twitter Follow Adam Zagoria on Twitter Follow ZAGSBLOGHoops on Instagram And Like ZAGS on Facebook