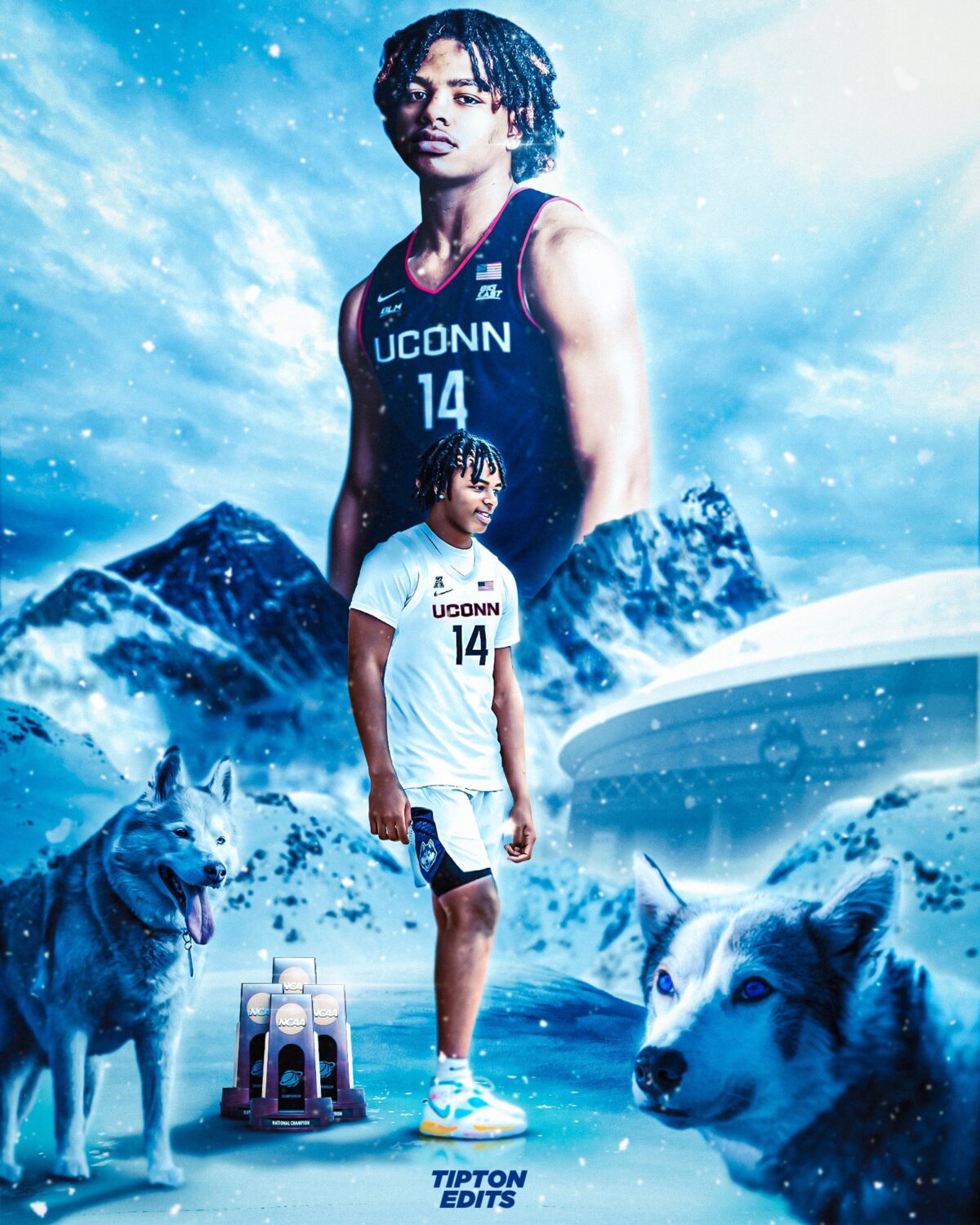 By ADAM ZAGORIA On his 17th birthday, Corey Floyd Jr. gave a big present to Dan Hurley and the UConn fan base. The 6-foot-4, 210-pound combo guard from Roselle (N.J.) Catholic and the Team Final AAU program officially committed to UConn one day after notifying Hurley he was coming. “I will be taking my talents to the University of Connecticut,” he told ZAGSBLOG in a phone interview before his public reveal via video. “There were a lot of things, the coaching staff and of course the fit for me and that program and education as well. Just from the beginning, they showed a lot of love to me and my family. That really stood out to me, they were always in contact with us and just talking to us about things outside of basketball which also stood out. It was just the best fit for me on and off the court.” Ranked the No. 16 combo guard nationally by 247Sports.com, Floyd said he also considered fellow Big East schools Villanova and Providence. Floyd averaged 11.2 points, 4.5 rebounds and 2.9 assists last season on a Roselle Catholic team that also featured big man Cliff Omoruyi, who chose Rutgers over UConn and others, and wing Niels Lane, who pledged to Florida over the Huskies and others. In 2022, Floyd will join a UConn program that has loaded up on New Jersey players recently, including current players R.J. Cole, Adama Sanogo and Jalen Gaffney. Samson Johnson, a 6-10 Class of 2021 forward from The Patrick School, RC’s chief rival, will suit up for the Huskies as well. “C.J. is a great player who is just scratching the surface of his talent,” RC coach Dave Boff said. “His best basketball is still ahead of him. Every year at RC he has added to his skill set as he continued to grow and get stronger. He now has that rare combination of great skill, strength and explosive athleticism that allows him to be a special player. “He’s a hard worker who loves being in the gym. With two years left in HS I’m excited to see his continued development.” UConn expects to lose James Bouknight and potentially Jalen Gaffney to the pros in the next year or two, so Floyd will be able to slide in and help take over after them. Floyd and the Lions will play a limited 15-game schedule beginning Jan. 26 due to the pandemic. Floyd is UConn’s first commit in 2022, but he has familiarity with Rahsool Diggins, an incoming point guard for 2021 from Archbishop Wood (PA) who also played for Team Final. “I know Rahsool Diggins in that class and I played with him a couple times, he’s just a great point guard, a great player to play with and I think we’re going to gel together,” he said. Said coach James Johns of Team Final: “Corey is an elite athlete. He can play either guard spot. He has a great understanding of the game, but what sets him apart is his competitiveness. When I first started coaching him, he was quiet, he would just do what I asked of him. But there was more there. I asked him did he want to be ‘Batman or Robin’? He said he wanted to be Batman. He wants to be the guy. He accepted the challenge and was a huge part of a team that went to the EYBL [U15] Championship. “He reminds me of Tyrese Martin in that way. It’s this quiet toughness. He wants to be great. He’s a winner. Coach Hurley is going to be great for him. Corey will accept the way Coach Hurley challenges his guys and holds them accountable.” A New Jersey native who played at Seton Hall and coached at St. Benedict’s Prep and Rutgers, Hurley has made recruiting tough, physical, winning players from the Garden State a priority. “Recruiting New Jersey and the metropolitan area is a huge part of our recruiting plan, the strong footprint that we want in terms of the geography of our approach,” Hurley said in November in response to a question from NJ Advance Media. “Guys that play high school and AAU and grassroots ball in Jersey, they have the makeup. They’ve got toughness, they’ve got the edge to come and play at a place like UConn, and handle the pressure and expectations of playing at a place like UConn.” Said Floyd: “The Hurleys are just known for their basketball knowledge and everything of that sort, so of course Jersey ties. He has that dog in him, I have that dog in me. It just went together perfectly.” Follow Adam Zagoria on Twitter Follow ZAGSBLOGHoops on Instagram And Like ZAGS on Facebook