Champions Classic: Tom Izzo on beating Duke without fans: “I know one thing, I’m not gonna put this as an asterisk” | Zagsblog
Follow @adamzagoria 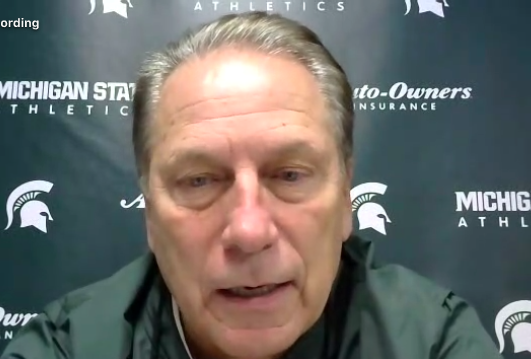 By JACOB POLACHECK After knocking off Duke at Cameroon Indoor Stadium with no fans in the building, Michigan State head coach Tom Izzo says he is ‘not gonna put this as an asterisk’. “I’m sure the Crazies could’ve made it even crazier, but I think the Izzone could make it crazy at our place too,” Izzo said in a virtual press conference Tuesday evening after the No. 8 Spartans defeated No. 6 Duke 75-69 in the Champions Classic behind a 20-point showing from sophomore guard Rocket Watts. “We’re losing out some. I know one thing, I’m not gonna put this as an asterisk. No fans or fans, it was a good win for us against a good team, great program and a very, very well coached team.” With the win, Izzo now has a 3-12 head-to-head record against Duke head coach Mike Krzyzewski. “Big win on the road against a good team. I give our kids credit and my staff credit for this win,” Izzo said. “It wasn’t the prettiest, but it was a grind-it-out Michigan State win, and as our offense gets better I think we’re going to get a lot better.”

Michigan State sophomore forward Julius Marble II was another key contributor, scoring 12 points in just 12 minutes. “Julius didn’t do it in this game — he’s done it the last two weeks in practice,” Izzo said. With the win, Michigan State moves to 3-0 on the season. In the second game, No. 7 Kansas beat No. 12 Kentucky, 65-62. Follow Jacob Polacheck on Twitter Follow Adam Zagoria on Twitter Follow ZAGSBLOGHoops on Instagram And Like ZAGS on Facebook